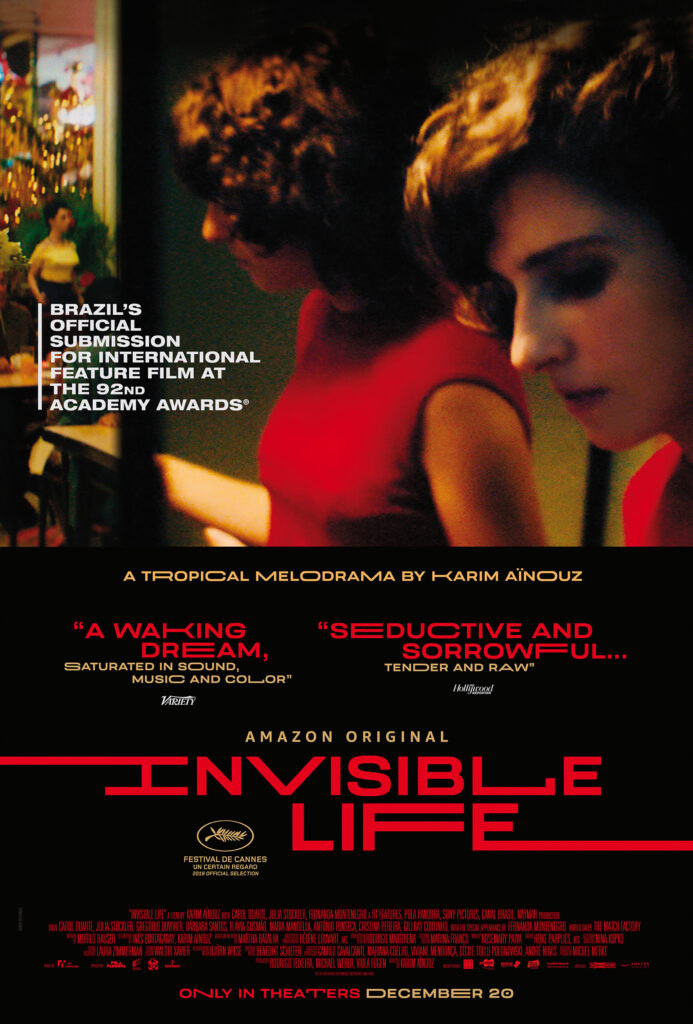 To everyone that says they don’t like to go to foreign films because they don’t want to read when they’re watching a movie, get over yourself.  Invisible Life is a fantastic Portuguese film inspired by the hit 2015 novel of the same name by Martha Batalha and worth whatever trouble you think it is to read the subtitles.

The film is a tropical melodrama from director Karim Ainouz set in the 1950’s Rio de Janeiro.  It revolves around the lives of the Gusmao sisters.  Euridice (Carol Duarte) who is eighteen and Guida (Julia Stockler) who is twenty are two inseparable sisters living at home with their conservative parents.  Their mother, Ana (Flavia Gusmao) adores them but is very traditional and subservient to their father Manuel (Antonio Fonseca) who is stern and unforgiving.  Although the girls are immersed in traditional life, each one clings to a dream.  Euridice, of becoming a renowned pianist and Guida of finding true love.  While Guida has in her little sister a trustful confidante for her romantic adventures, Euridice finds in her spirited older sister the encouragement she needs to pursue her dream of becoming a professional pianist.  In a dramatic turn that will set the sisters on their lives paths, they are separated by acts of their father and forced to live apart.  They take control of their separate destinies while never giving up hope of being reunited and living out their lives together.  While being apart from one another, the women battle to overcome the obstacles that prevent them from becoming the women they could have been.  In true melodramatic fashion, among the daily hardships, the greatest battle is against the fate that separated them.  Will they find each other in time to overcome the oppression that suffocates them?  You will have to see the movie to find out.

I can’t tell you how moved I was as an audience member when I saw this film.  Especially since it was a melodrama.  You see, melodramas traditionally have been used on television with telenovelas in South America and tend to be over the top.  But Invisible Life is balanced and powerful with a lush visual style.  Don’t get me wrong; you’ll cry in parts, but it’s an emotion that has been earned by the film’s performances.  And not by just manipulating the audience with a sappy pop song playing loudly like in most mainstream Hollywood films.  I think that the director said it best when he was asked why he chose this format to tell this story.  Karim Aninouz said, “Melodrama can be very powerful.  Here I sought to celebrate melodrama as a radical aesthetic strategy to draw a social critique of our times.  One that is visually splendid and tragic, grand and raw.  I wanted to craft a story that sheds light on an invisible chapter of women’s history.”  He goes on to say, “I was determined to tell a tale of solidarity, a story that underlines the fact that we are much stronger together than we are alone, no matter how different we might be.”

I give Invisible Life an A+ rating.  It’s a heart-touching story of the love between sisters that will make you want to hug your siblings.