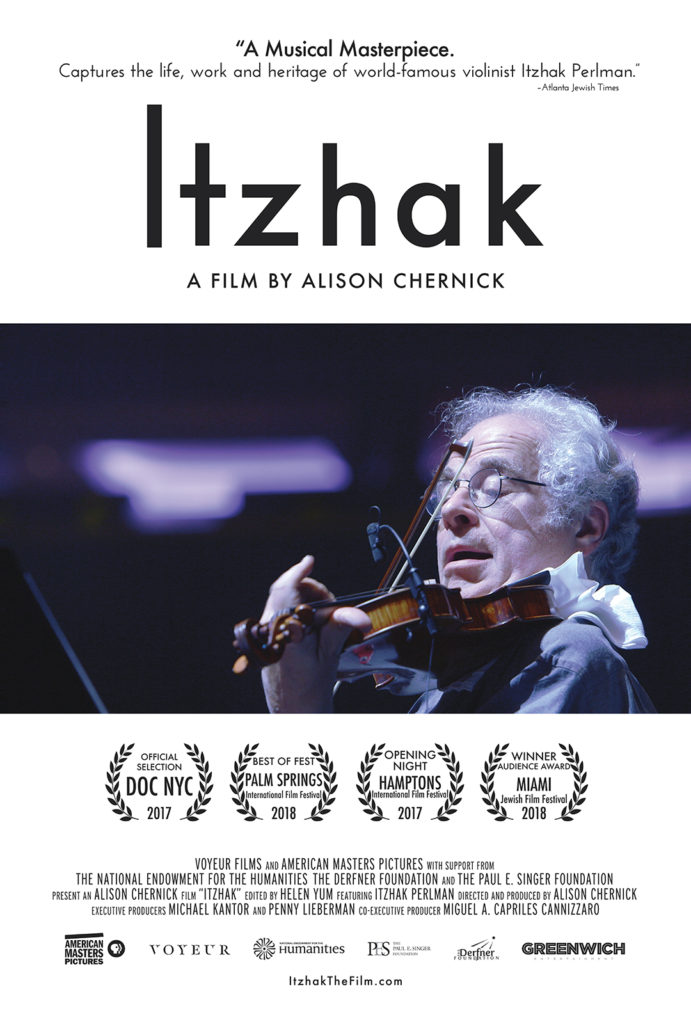 ITZHAK – A Review by Cynthia Flores
A lovely documentary about the musical genius that is Itzhak Perlman, Alison Chernick’s film is a touching portrait of the iconic violinist.  The movie has a breezy quick pace that centers more on his music than what made him who he is and that’s ok.  We get to see him start in Israel as a prodigy violinist in the 1950’s to currently being world-renowned and a fixture in New York City.  The access the filmmaker had to her subject gives this film a sense of intimacy that most documentaries lack.  You feel like a friend sitting at the table enjoying something he or his wife has cooked up instead of an outsider looking in from beyond the kitchen window.  So the filmmaker’s choice to open the film with the Perlman's, who are baseball fanatics, getting ready for him to play the national anthem for a Mets game really sets the tone for the rest of the film.
In this documentary, Itzhak, we learn that America was introduced to him by his performance at the age of thirteen on the Ed Sullivan Show.  That exposure made the famous school of music called Julliard finally take him seriously and accept him as a student.  Mr. Perlman had been rejected before because of being disabled by polio which he had survived as a very small child.  They saw a little crippled kid and not the genius that came from his fingers on the violin.  Ed Sullivan championing him and giving him a platform to show the world how truly gifted he was became a turning point for him and his family.
The film has a nice balance of Mr. Perlman rehearsing and playing music and his private moments with his family and his beloved wife Toby Perlman who is a joyful, empathetic presence in his life.  They met at music camp when they were teenagers so they share a great love for the arts as well as each other.
Of course the film is filled with Mr. Perlman playing his violin.  The music alone in this film is worth the price of admission.  The bonus is the insight into his philosophies on the subject and teaching music to the next generation of musicians.  In the film, Mr. Perlman says in Hebrew “To elicit a sound from a piano is automatic, you hit the keys and the mechanics do the rest.  From the violin, when you finally get the sound, you are really getting something out of yourself.  To coax emotional shadings from a violin, the more you have in your heart, the more you have to give.”
Mr. Perlman is void of a “prima donna” ego when performing with other musicians from the greats of the classical world to being live on stage with Billy Joel.  Watching him teach and perform is at the heart of this documentary.  Itzhak is a great new documentary for music lovers and fans of the great man.  I give it an A rating and hope you’ll see it soon.
Directed by Alison Chernick
Rated NR
Selig Rating A
Running Time 1hr 22min
Documentary
Limited Release April 27th Magnolia Theater
Starring: Itzhak Perlman
The Selig Rating Scale:
A – Excellent movie, well worth the price.
B – Good movie
C – OK movie
D – No need to rush. Save it for a rainy day.
F – Good that I saw it on the big screen but wish I hadn't paid for it.
Tags from the story
Alison Chernick, Greenwich Entertainment, ITZHAK, Itzhak Perlman, Toby Perlman
Facebook Twitter Pinterest
LinkedIn Email

A CRIME ON THE BAYOU – A Review by John Strange

KUBRICK BY KUBRICK – A Review by John Strange