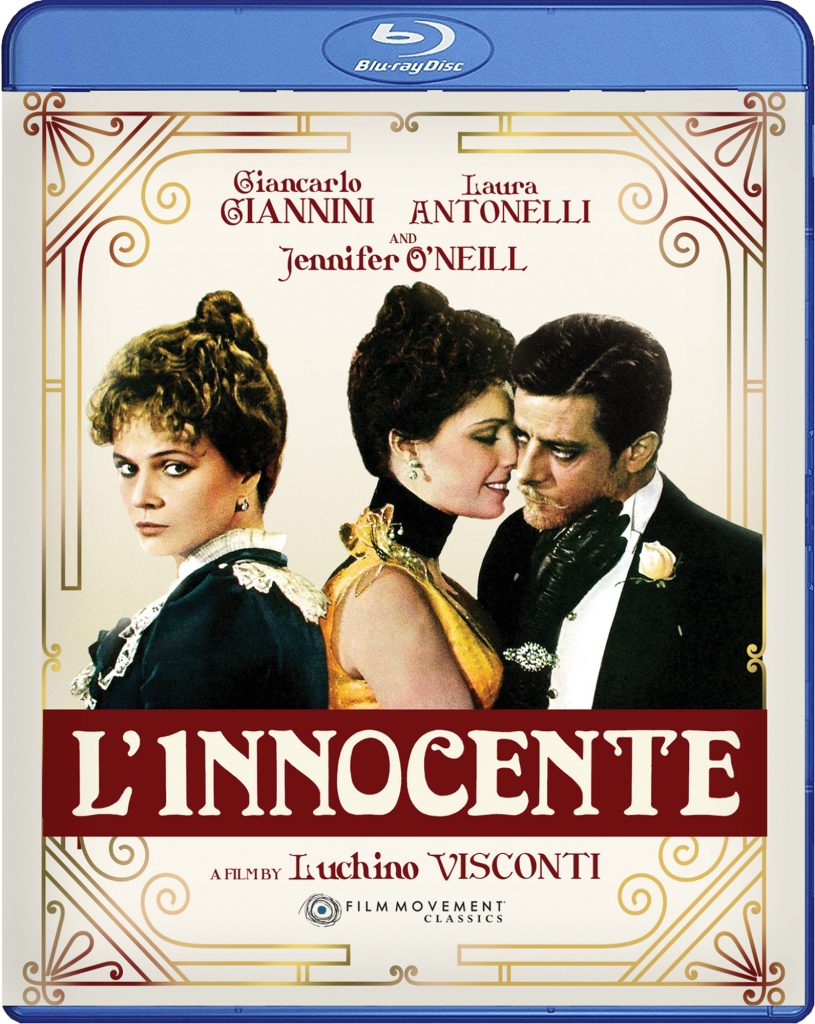 Italian period dramas, especially those made during the 1970s, were big flashy displays with gorgeous scenes and costumes.  L’Innocente from auteur Luchino Visconti is an excellent example.

Set in late-nineteenth-century Italy, we have a story of aristocrat Tullio Hermil (Giancarlo Giannini), who loves his wife, Giuliana (Laura Antonelli), but has found he loves his latest mistress, Teresa Raffo (Jennifer O’Neill), more.  That is until she has an affair with another man, Filippo d’Arborio (Marc Porel), a gadabout novelist she meets through Tullio’s brother Federico (Didier Haudepin).

Film scholars have picked every aspect of this film apart frame by frame.  They have discussed everything from the wall colors to why specific paintings in the background of certain shots.  In fact, the bonus extras that accompany this Blu-ray are a video essay by Ivo Blom and a 16-page booklet containing another essay, this by Dan Callahan, that includes some excellent photos from the film.

A review based in today’s BLM and “Me, Too” era probably wouldn’t be nice to the film as it is a trip through a world that is filled with people of privilege (and their servants).  This is a great example of a well-made film of its era.  We see what the privileged did to fill their day.  This includes lots of fencing practice and sitting in parlors listening to powerful older ladies play classical pieces (somewhat poorly) because they needed to stay in good with said powerful older lady.  And, of course, having occasional rendezvouses with lovers.

And for those of you who are upset with nudity, there is both full male and female nudity.  This nudity was not surprising to me as it seems like so many films of this era (the 70s) did their best to find a place to slip nude bodies into their films.

I liked this film, though the first nude did take me by surprise.  I expect to see couples “coupling” but not men walking around nude talking to men who are dressed.  But it fit in the story and lasted only a short time.  As I am not necessarily as PC as I probably am supposed to be, I give L’Innocente,  Luchino Visconti’s final film, 4-stars.