Writer/Director/Actor Ben Affleck is back on the big screen with a colorful and enjoyable gangster story from the mind of Dennis Lehane.  A hell of a cast and a wild tale make Live By Night one of the year's early favorites.  Is it worth your time?  Click through for my full review of the film.

Live By Night is a film that is split between two sections.  The first 15-20 minutes of the film are a look back at the events of our lead character's descent into the criminal world in the early 1910s-20s in Boston.  Ben Affleck narrates us from his time in World War I into his outlaw bank robbing days after the war.  This section of the film does help establish some key elements of the story and has some solid performances from the likes of Brendan Gleeson and Sienna Miller.  Even a fun cameo from Clark Gregg helps bring some levity to the harsh violence we witness in the Italian/Irish Mob war of the late 1910s.  Overall though these are the most boring elements of the film.  Robert Richardson's wonderful cinematography work is highlighted by a tremendous car chase sequence that sets in motion the "move" for Affleck's Joe Coughlin.  That move down south to Florida is where the film truly becomes good and different from other gangster films.  Before we dive down into the Tampa Bay section I would like to highlight the tremendous performance Sienna Miller gives as sultry Emma Gould.

The trip down south to Tampa and the bright colorful world down there = AWESOME.  The way DP Robert Richardson captures the colors from the beautiful sun sets and sun rising scenes is spectacular.  Moments with dolphins are pretty to witness and something not really thought of in a gangster film.  But more importantly the colorful characters in Florida are the real treat.  Colorful being not only the vast racial differences in the southern elements of the film, but the costuming and production design switching to a vibrant color scheme is wonderful to see.  Chris Messina's Dion Bartolo is one of the film's best performances and from his full introduction (we meet him in Boston but only barely) is one of the finest moments in the film.

The film's Tampa sequences harp back to the Godfather II's trip to Havana or Donnie Brasco's trip to Florida in which the south truly has a different speed and pace…and style.  The clothes and hats throughout this film are incredible and highlight the vibrancy of the 1920s in the US.  We witness rum running at its most visually alluring time.  Live By Night doesn't shy away from embracing the speed and fun of the era and the film really is engrossing throughout our time in Ybor City.  A pair of dynamic female characters also highlight the second section of the film.  Zoe Saldana's engaging Graciela is the perfect play off Sienna Miller's slutty Gould, but Elle Fanning's suprise twist as the evangelical Loretta Figgis is stunning.  Her character's arc in the film is really intriguing and her demise is one of the film's real shocks.  Her actions are truly impactful and showcase the one element different from the north.  Religion in the south vs the Catholic/Protestant compliance is strongly against the influence of the mob.  But the South also holds a racism that is out and shown.  Matthew Maher's role as RD Pruitt is incredibly offensive and sparks some wonderful back and forth with Affleck's team.  The Ku Klux Klan elements are a nice twist to most gangster films and highlight Dennis Lehane's wonderful research.  As the foreign gangsters invade on the KKK's land the more exciting the film gets and the twisting alliances are truly tested.  Overall the film never loses its fluid pace while down south and you almost wish they had gotten to Ybor earlier.  The last half of the film does seem a bit lengthy though.  There are at least 3 or 4 moments the film could have ended, but the final elements just aren't as enjoyable as the exciting Tampa scenes.  Chris Cooper's lost soul Captain Figgis is a wonderful character but his final actions seem an utter waste and don't hold as powerful a closing as wished.  The film doesn't treat our gangster lead like wonderful films Layer Cake, Donnie Brasco, or Scorsese's Departed/GoodFellas/Gangs of New York with utter demise.  Instead the film is a bit to sappy in the end.  It may remind folks of the way Road To Perdition ends, but holds none of the amazing power and heart in that film.  Overall Affleck's direction is on point but his acting seems the worst part of the film.  The "look at me" feel of his performance is quite annoying.  But surrounded by the rest of the amazing cast and his quality directing Live By Night is surely better than most films.  The film just isn't as special as the oscar contenders still in theaters.  A film that is enjoyable and well made, but lacks the punch of the gangster film legacy before it.  Affleck's previous directing credits also have a real darkness to them that isn't really seen in this film.  Enjoy the flavor and fun of Live By Night, just don't expect excellence. 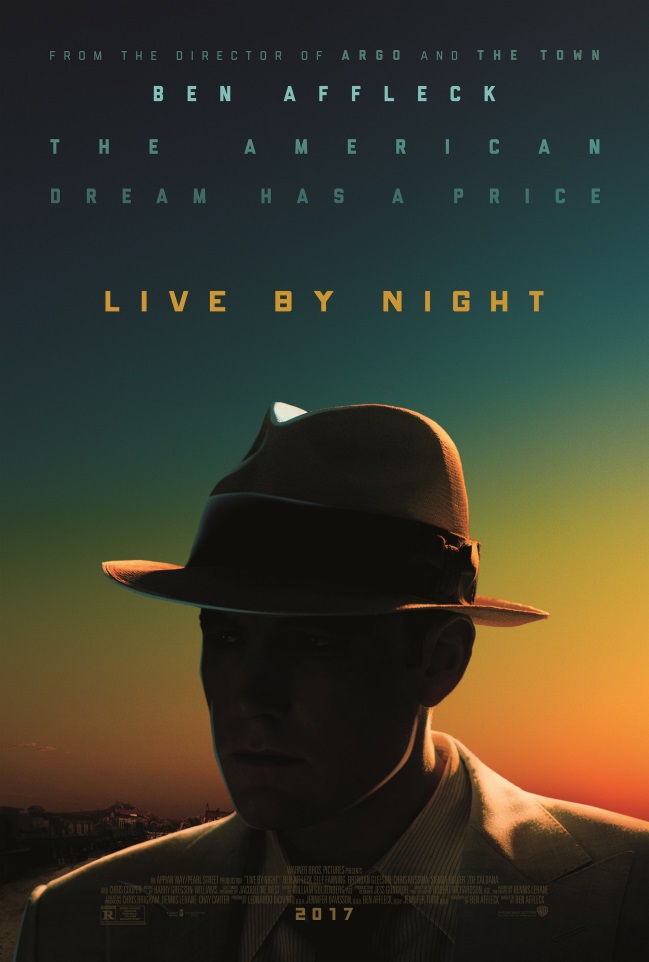