Wes Anderson’s 10th film showcases all the storytelling devices he loves to utilize to bring forth a rather special treat.  This film may not become everyone’s favorite of his works, but it certainly highlights all the elements that make us fall into his quirky world.

For my full review turn the page into the magical film that is THE FRENCH DISPATCH.

THE FRENCH DISPATCH brings to life a collection of stories from the final issue of an American magazine published in a fictional 20th-century French city.

Like all of Wes’ films the casting is always the main headliner.  The French Dispatch seems crazy ambitious even for Anderson as half of the known acting world seems in this film.  The usual suspects like Owen, Jason and Bill are there of course.  And yes Bob Balaban is there too.  Now there are some fresh faces like Lea Seydoux (busy October for the starlet!), Lyna Khoudri and also that busy fella Timothee Chalamet.  The real standout performances belong to Benicio Del Toro, Tilda Swinton and Jeffrey Wright who each are electric in their quirky characters.  And Francis McDormand seems to relish her story segment especially with a salty short exchange moment with Christoph Waltz that is a blink and you’ll miss it treat.  I loved having Toni Revolori (Grand Budapest standout actor) get a nice cameo as the younger version of Benicio’s jailed character Moses Rosenthaler.  And Adrien Brody truly steals every word he can in this one. Lastly, add in a nice group of French veteran actors to sprinkle just the right amount of sugar over everything.  So yes the film is worth just the cattle call of talent in the movie and how much fun they all seem to have portraying the wild Wes world.

Lets now give a nod to the Wes team.  Musical score by the genius that is Alexandre Desplat adds just the right push for the film’s overall pace.  Speaking of pacing, DP Robert Yeoman and Editor Andrew Weisblum are tasked with constantly keeping this ride a moving.  The way in which we linger just perfectly before diving to the next wild setup seems to have become secondhand for this team.  As Grand Budapest truly showcased the worth and merit of Production Designer Adam Stockhausen this movie may put him on another pedestal.  From jailhouse to swanky museum to Kansas country side to the streets in and around our small lil French location there is little doubt about the brilliance of Stockhausen and his team.  Now if there is an element that takes this film to new heights its the costume design by Milena Canonero.  Tilda Swinton’s dress alone deserves its own recognition.  But Canonero’s ability to capture different decades and eras in the stories while still giving us the unique color palette of a Wes Anderson film is remarkable.  Overall the technical expertise of this team is tremendous and their trophy cases at home should be expanded with this movie.

And through all that ass kissing I’ve done I’ve left the best for last.  I have to admit my favorite Wes Anderson film is Fantastic Mr. Fox and I thoroughly enjoyed Isle of Dogs.  Thus I’m one of the Wes fans that loves his animated elements and his first foray in film with his Dallas goldmine that was Bottle Rocket.  So let me say that The French Dispatch has easily one of the best animated sequences in Anderson’s collection.  I’ll even go as far to say the final story’s animated car chase sequence is simply put one of the greatest car chases in movie history…animated or not!  I won’t spoil it anymore other than to say its WORTH the PRICE OF ADMISSION!

And now it is time for you to make your plans and include Wes’ Wacky World in them. 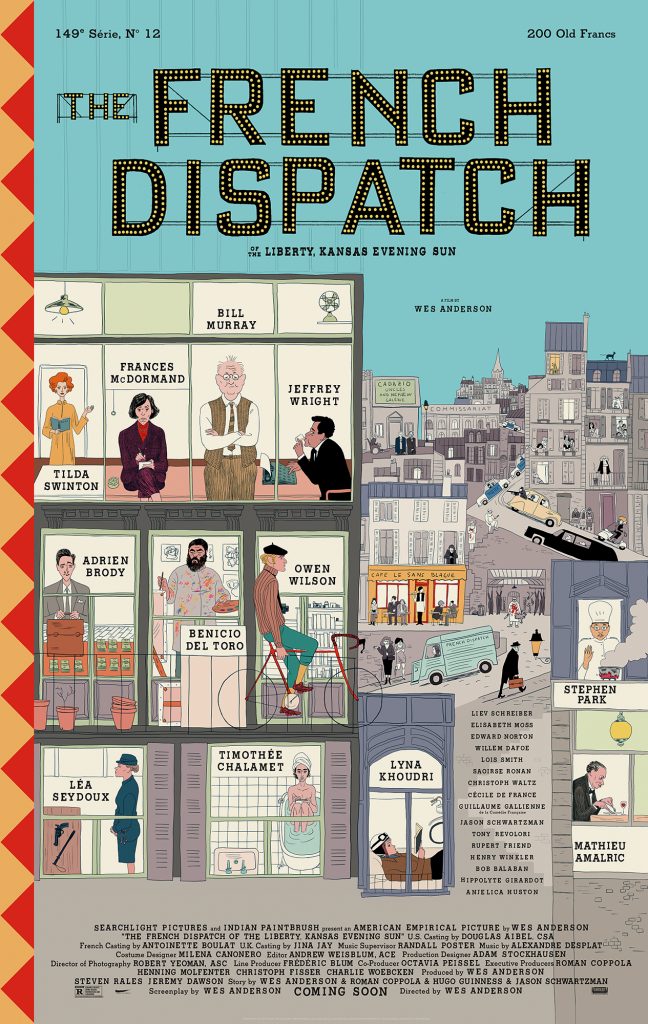