This week's movie releases deal with the evil demons of the past in three different ways.  Sony Picture Classics historical legal drama, Labyrinth of Lies, looks at the impact of trying to hide a country's demons only to see true growth from highlighting the evils of the parents.  Paramount pictures sees the end to the inventive, but fleeting Paranormal Activity: The Ghost Dimension.  And Netflix continues to reinvent the home watching experience with the powerfully honest Beasts of No Nation.  Click through for my full movie reviews.

The directorial debut of Gregory Plotkin allows for his quick editing style to be showcased even though the script and rushed ending make this final chapter a bit lacking.  The tricked up camera that gives an impressive visual spectrum makes for an exciting addition to the scary franchise.  The 3D elements are fully realized with this added "new" technology wrinkle that allows Plotkin to go past just the usual jerky scares.  But even with the cool special effects the thrilling moments are annoyingly allowed to be predictive and corny at times.  The prophet plot lines are rather intriguing and the crossover with the lead family are by far the best moments of the script.

But the demon's attributes are so clouded and hidden till the very end we don't get the chills gained from classics like Exorcist, Poltergeist (original not the remake) or the original Paranormal Activity.  Plotkin shows enough to garner his own take on a fresh subject after successfully allowing for this franchise to at least have some closer, even if it felt rushed and corny at the end.

Germany 1958. Reconstruction, economic miracle. Johann Radmann (Alexander Fehling) has just recently been appointed Public Prosecutor and, like all beginners, he has to content himself with boring traffic offenses. When the journalist Thomas Gnielka (André Szymanski) causes a ruckus in the courthouse, Radmann pricks up his ears: a friend of Gnielka's identified a teacher as a former Auschwitz guard, but no one is interested in prosecuting him. Against the will of his immediate superior, Radmann begins to examine the case – and lands in a web of repression and denial, but also of idealization. In those years, "Auschwitz" was a word that some people had never heard of, and others wanted to forget as quickly as possible. Only the Prosecutor General Fritz Bauer (Gert Voss) encourages Radmann's curiosity; he himself has long wanted to bring the crimes committed in Auschwitz to the public's attention, but lacks the legal means for a prosecution.  From Labyrinth of Lies website.

Labyrinth of Lies is the Germany submission for the upcoming 88th Academy Awards and is a real contender for it's passionate look into the unveiling of the SS evil reign.  A film that doesn't get bogged down in being simply a legal look at the finding of the hiding Nazi's.  We witness the realities of seeing a country reluctantly open it's horrible acts to the world.  Investigative journalism is not merely a group of young ambitious naysayers but rather a group of passionate seekers of truth.  The family elements of knowing and hiding those members that were apart of the war and holocaust is a deep seeded and dark element that lingers throughout the film.  The film always harps back to this tough truth being present even in the lighter moments in the movie.  A film that you owe the time to see as the actors deliver something really special along with the captivating honest script.

Cary Fukunaga choice to give up the prestige of continuing True Detective to rather dive into the jungles of Africa to bring to life Uzodinma Iweala's violent take on child soldiers.  Abraham Attah gives one of the year's most heartbreaking and honest performances of the year, easily a young boy who's humanity is fully highlighted.  You feel his humorous innocence via the film's fun opening, but the impact of war and Idris Elba's powerful gaze makes Attah into a real terror.  As we see him motivated and moved to terrible choices you realize that Beasts of No Nation isn't about where, when and why but rather HOW these children can become killers.  Elba doesn't shy away from the harsh and misguided nature of the Commandant.  We don't need to know where exactly these training grounds are, but instead we get to see how fear and family rule.  But this new family's rituals and ideas are haunting reminders that if you betray this new family you feel it's wrath.  There is a moment where the new recruited young fighters are lined up in a line to be executed, very similarly to the way they saw their real parents and families murdered.  But the moment the ear piercing "fake" rounds are fired Idris Elba's commandant gives a passionate speech to show how with this new family you are invincible and thus gods amongst the heathen fellow Africans.  This tactic is a staple of these renegade groups that use fear to manipulate boys into becoming thoughtless killers.  Beasts of No Nation's cinematography and tremendous acting are merely the starters for this award worthy film.  The boldness of Netflix to back movie releases in their home first manner has the potential to make waves if the films are as perfectly made as this one. Don't miss out on this real winner of a film that never loses it's ability to inspire even amongst all the terrible death and blood soaking this unnamed African country goes through.

For more info on Labyrinth of Lies please go, here.

And find Beasts of No Nation on your Netflix account. 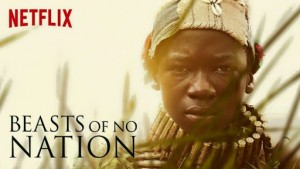 Written By
Gadi Elkon
More from Gadi Elkon
Dallas Summer Musicals present this musical classic in all it's glory.  The...
Read More