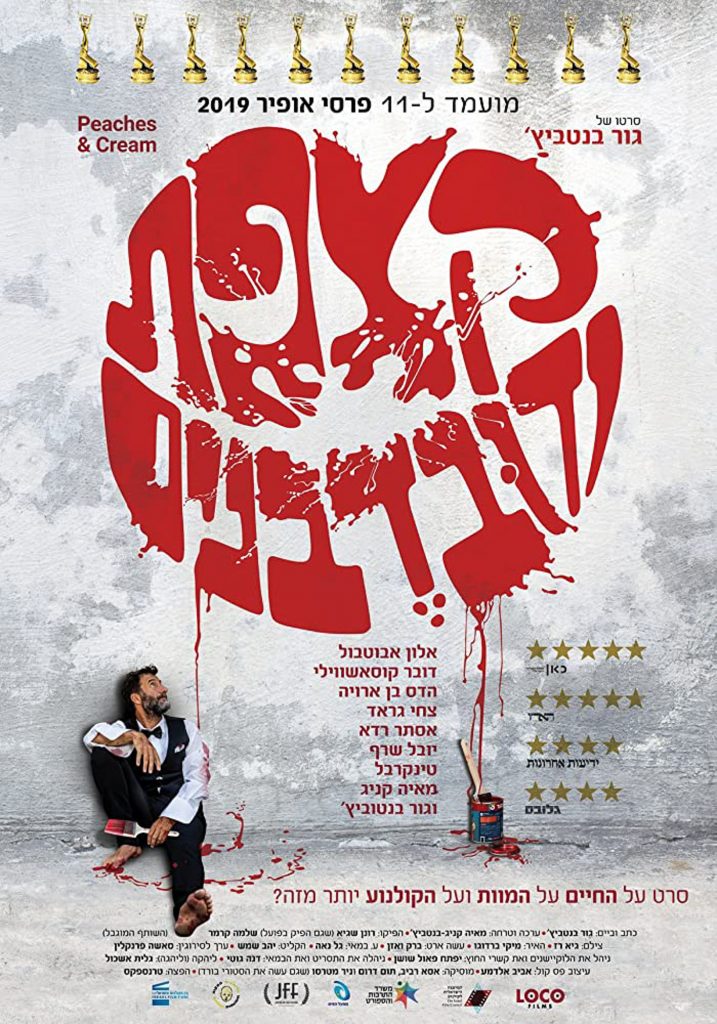 PEACHES AND CREAM – A Review by Cynthia Flores

This film is the fourth feature from writer/director Gur Bentwich. He even stars in this film. I give it high praise when I say it reminds me of the fantastic 2014 Academy Award-winning Italian language film The Great Beauty. Both films are stories of talented men, of a certain age, taking stock of the past and noting the absurd, exquisite beauty of their present lives. This film, Peaches and Cream, didn’t have the massive budget the Italian movie did. However, Bentwich makes every moment on screen count, and if you make it through the few slow bits, it pays off big in the end.

In Peaches and Cream, we meet Zuri Shostak (Gur Bentwich), a neurotic film director who is having an existential crisis on the night of his new film release. He’s driving his girlfriend and editor, Inbal Kaplan (Maya Kenig), nuts by bouncing around the seats and complaining about the volume being too low. After sitting through his picture bombing, he feels sick and insists on going to the ER to be checked out. Inbal thinks he’s just being dramatic because the film is a flop. He leaves her at the apartment and has the cab driver, Micho (Dover Koshashvili), take him to the hospital. This sets into motion an unforgettable night for Zuri and his band of friends. All the while, the meter is running, and Zuri is literally running out of time.

Peaches and Cream is semi-autobiographical and all the parts are played by famous Israeli actors and directors. The part of Inbal is actually played by the directors’ real-life partner and editor of this film. Bentwich really did have some of the experiences in the film, including walking around with a heart attack he wasn’t aware of. He took what he came up against and managed to find the humor and humanity in it. He makes fun of himself, and his narcissistic obsessions with cynical flourishes throughout the film. As his producer in the movie, Mushon (Tzahi Grad), shouted to Zuri as he was being rolled into emergency surgery, “Make a film about life, death, and cinema!”

I give Peaches and Cream a 5-star rating. It’s a great way to kick off the 8th annual Israel Film Center Festival. Also, be sure to wait until the end of the credits and through the coda. You’ll see his “Light at the end of the tunnel.”