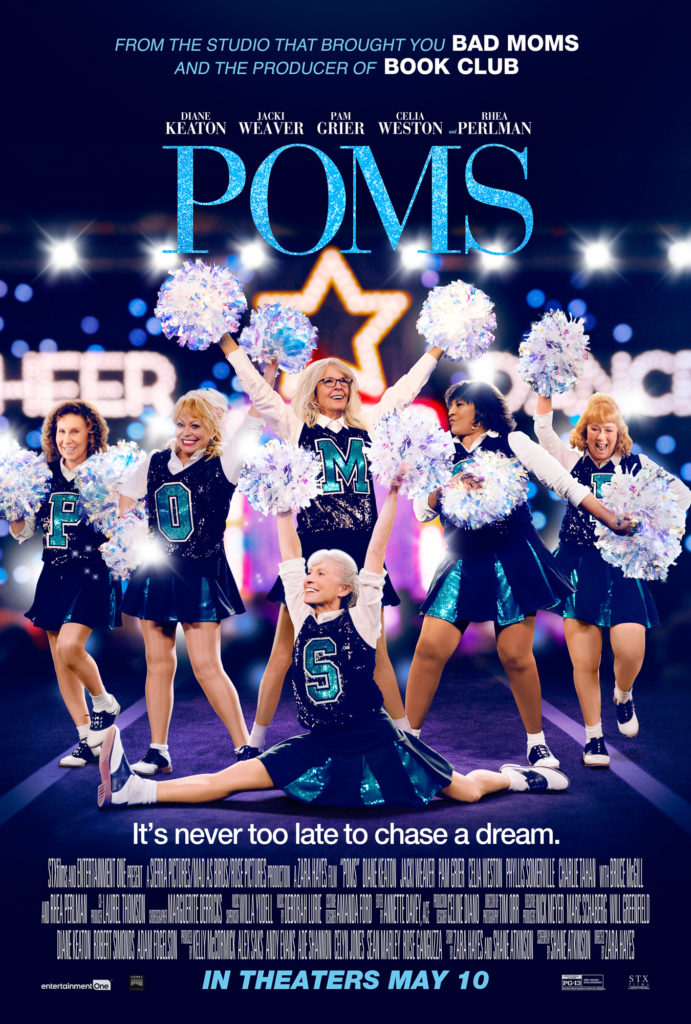 POMS – A Review by John Strange

Cancer disrupts the lives of everyone involved.  Martha (Diane Keaton) decides that rather than go through the pain of chemo, she is going to leave the life she knows and move south to a retirement community to live out her last days.

Her life is not to be the quiet descent into death that she had planned.  The community, led by the forceful Vicki (Celia Weston) insists that she join a club or start one of her own.  Following her rather bizarre introduction to her neighbor, Sheryl (Jacki Weaver), Martha decides to start a cheerleading club!

The trials of getting the club up and running are complicated by Vicki’s decision that the club is not right for their community.  Told they must have 8 members to be official, Martha and Sheryl hold auditions.  Each lady who auditions is amazing in her own way!  My personal favorite has to be Olive (Pam Grier) because she is, well, she’s Pam Grier.  Second favorite would have to be Alice (Rhea Perlman) because her character had to have been a hoot to play!  (You’ll just have to see Alice in action to understand!)

This is a well-written film about a dying woman who is given a second chance to live out her childhood dream to be a cheerleader.  The story like all of the best tales has the good guys (Martha and the girls, bolstered by Sheryl’s grandson (Charlie Tahan) and a high school cheerleader (Alisha Boe)) versus the bad guys (Vicki and her committee of sycophants and backside kissers).

The girls have a long road to get them from their clumsy beginnings through the final competition and you will enjoy every minute of it.  Well, all except for those brief moments that remind you of Martha’s cancer.

Poms is not a chick-flick but it would make a great date night flick.  A fun film. despite the cancer; you will come away feeling good.  The writers, Shane Atkinson and Zara Hayes, treated the subject of cancer and death with a grace I didn’t expect.  LOVED the story and the film.