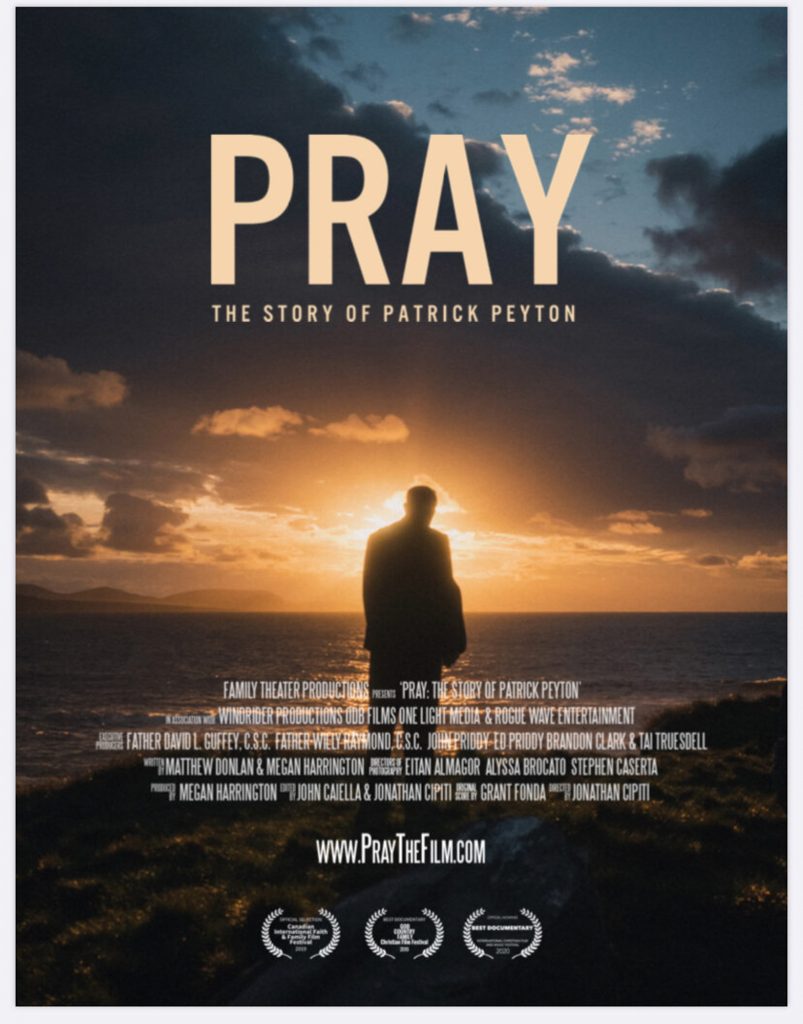 PRAY: THE STORY OF PATRICK PEYTON – A Review by John Strange

Patrick Peyton was born in 1909 in northwest Ireland to a large family.  Poor in wealth but rich in family, the family gathered daily for the saying of the Rosary.  This gave young Patrick a desire to join the priesthood but didn’t help him in his school studies, quitting school in the 6th grade.

After being turned down for the priesthood, Patrick convinced his brother to go to America with him.  The two young men settle near their sisters who had preceded them to this country.

Young Patrick got a job as a janitor at a cathedral.  From there he was able to get into the seminary at Notre Dame University where he turned his previous school attitude around and did very well.  It was there he was diagnosed with tuberculosis.

The illness progressed swiftly.  He was desperately ill when Father Hagerty, his favorite professor, came to see him in the hospital.  There was a surgery that might save him, but the odds were not good.  The priest told the young man that only a strong belief in the Lord, faith in the blessed Mary, could save him.  Patrick began praying.

His TB, for lack of a better term, healed completely.

In 1941, Patrick and his brother were ordained at Sacred Heart at Notre Dame University.  Father Patrick promised that he would get ten million rosaries being said in homes around the world to promote peace.  This film shows us just how this humble priest wowed Hollywood and anyone else he encountered in his quest.

From a poor Irish boy to school drop-out to janitor to priest this man never lost his humility.  His fame never changed him.  That is, in my opinion, why he won over the hearts of radio system owners, filmmakers, and the A-list Hollywood stars of the day in his quest to promote a simple idea, “The family that prays together, stays together”.

His success isn’t all that surprising after you have heard him speak.  He talked from his heart, telling of his faith and how it can help you in your life.

This film is filled with people who listened to the man and came closer to their god.  Their testimonials and anecdotes help us to see the man they knew.  It’s a wonderful story of faith and love, of devotion and dedication.

As a photographer, I loved the stills seeded throughout the film and during the credits.  I truly enjoyed learning about the man and his mission in this 5-star documentary.  If you have faith, I think you will enjoy it as much as I did.