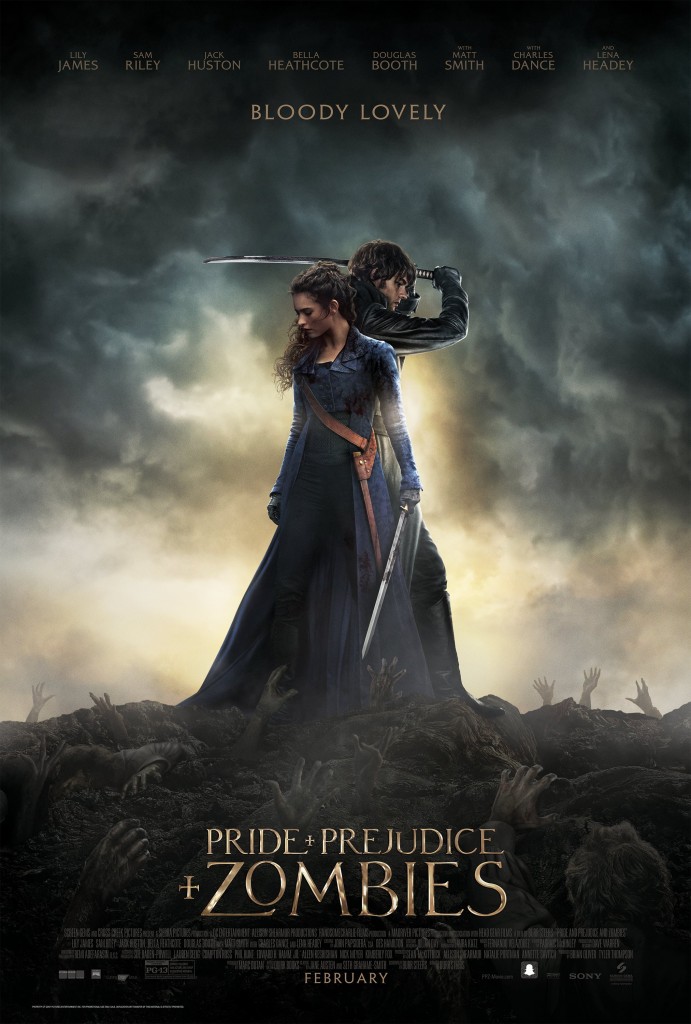 PRIDE AND PREJUDICE AND ZOMBIES

Written and Directed by: Burr Steers

I just love dumb fun movies and always have.  As a kid, the local independent station would play all those 1930s Universal horror flicks and I watched every week.  Another station would have the ‘Million Dollar Movie’ and my favorite weeks were Godzilla Week, Elvis Week and Horror Week.  I talked my parents into taking the entire family to the drive-in to see the double feature of I’ll Drink Your Blood and I’ll Eat Your Skin.  I had a subscription to Famous Monsters of Film-land Magazine and met Forrest J. Ackerman, the publisher. When I was a teenager, a gang of guys would go to the Midnight Movies and see such flicks as The Wizard of Gore, 2000 Maniacs, The Rocky Horror Picture Show and Bloodsucking Freaks. To this day, I just adore those who strive to give the audience something different than what the studios produced.

But, those guys who grew up like I did are now running the studios and major motion pictures feel more and more like those flicks.  Over the last few years, we have gotten such strange films as Abraham Lincoln—Vampire Slayer, Godzilla and Sherlock Holmes where the constraints of the previous genres are twisted into something different.  The latest to blend together different ideas with the promise of being super-dumb is Pride and Prejudice and Zombies.  It already has the greatest title of 2016

The story starts with a group of the idle rich playing cards in a giant estate.  They are interrupted by Mr. Darcy (Sam Riley) who is looking for a fiend in their gathering.  Mr. Darcy releases some flies, insects that are attracted to the dead.  They alight on one of the guests and our sullen hero fields the beast back into the netherworld.

Then we are told the tale of Jane Austen with cut-out puppets unfolding like they are from a picture book.  It seems that the world has been consumed by a zombie plague from a part of the uncivilized planet.  While different parts of Europe have been blaming each other, the English have taken a more proactive role.  They have built a giant moat around London proper, defending the city and leaving the countryside to the horde of undead.  Eventually, some have learned to fend off the zombies and moved back to the country estates.

But England being England, the upper-crust still live a very different life than the peasants live.  Even under duress, the women strive to meet the proper man of the right lineage and wealth.

The film focuses on the Bennet sisters.  They cannot be left the family estate so all must find suitable and living husbands.  Elizabeth (Lily James) and her sisters attend the ball of a neighbor and the girls destroy a horde of the possessed un-dead.  Her sister Jane (Bella Heathcote) catches the eye of Bingley (Douglas Booth).  While Elizabeth cannot stand Darcy, she catches the eye of Wickham (Jack Huston).  He shows her a different side of the way she was taught to think.

The film goes around and around between killing flesh-eaters and courtly romance. At times, the film is truly never sure exactly what kind of film it wants to be. It never falls over the edge into kitsch and it never wants to be a straight horror flick.  Some scenes are funny but are juxtaposed next to scenes of gore.  Director/writer Burr Steers is never sure exactly hat kind of film he wants to make.  He may be too close to the material and does not want to expand on the printed word.

The cast is full of little known but very pretty people trying to break into Hollywood features.  Some may make it and some will never be seen on the screen again.  But every member the cast tries to execute both the horror and the comedy with various degrees of success.  With such a large cast, it is easy to become lost in the shuffle.

Easily the best member in this large cast is Matt Smith who plays the parson.  He gets the greatest share of the laughs with a character that generates them with sheer will over cleaver lines.  His mug is perfect for the role that requires a degree of mugging.  There is a much needed comic relief with his performance and he milks every moment.  It is a joy with every moment he shares on the screen.

The film captures the look and feel of Jane Austen.  The craftsmen behind the scenes use every trick in the book to turn this book into something more than just the printed word on the cinematic page.  It is joyous to look at on the big screen.

To sum up, some in the audience will think that Pride and Prejudice and Zombies is one of the greatest films made and some will find it a bore.  It falls somewhere in the abyss middle.  But, no matter what it does at the box office, it should make millions of more fans on DVD where it will live for decades.

RICK AND MORTY: SEASONS 1-4 – A Blu-ray/DVD and Digital HD Review by John Strange

THE ORPHANAGE – A Review by John Strange