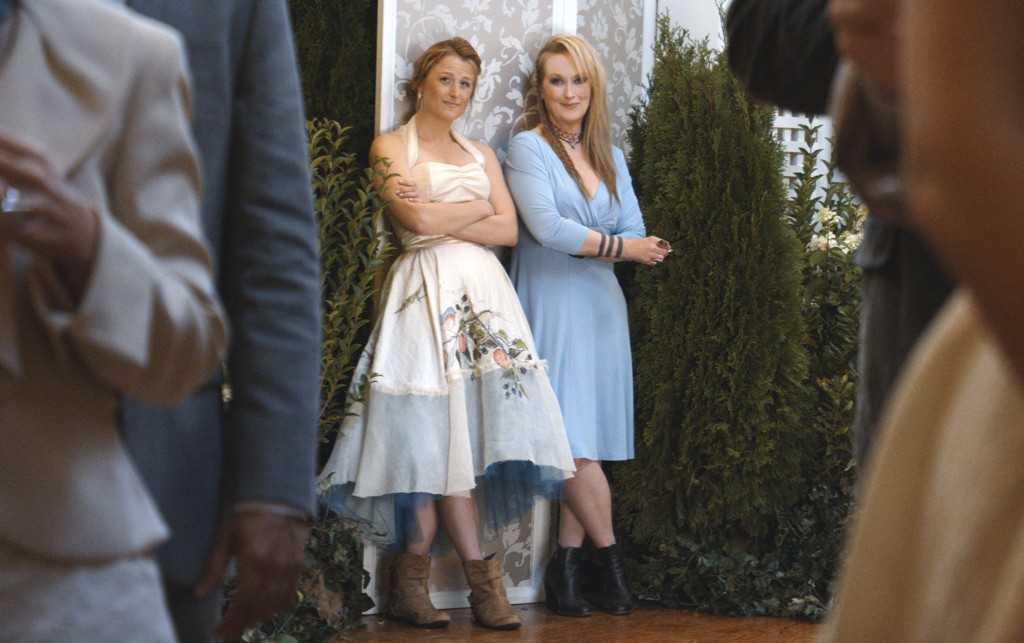 RICKI AND THE FLAME

Meryl Streep is considered one of the best actresses in the world. From Kramer vs. Kramer through three Oscar wins she has proven her mettle in the hottest of cinematic fires.  There are few roles she has not conquered.  So it is time to have some fun with a role like Ricki and the Flame.

Ricki (Meryl Streep) is the lead singer for a bar band that wants to break to the next level.  When we first see them, they are rocking “American Girl” by Tom Petty.  But they are in a small bar for a handful of the faithful.  While dreams of Rock and Roll superstardom may have passed her by, she still is plugging away at what she loves.  Greg (Rick Springfield) is her lead guitarist and the man she banters with onstage.  Everyone can tell that the two have a long history together.

Now, that would have been a good movie with loads of rock tunes and the exploration of the last vestiges of scattered fame.  But alas, that is not our movie.

Things change with a phone call.  It seems that her newly married daughter Julie (real life daughter Mamie Gummer) has been left and dad Pete (Kevin Kline) doesn’t know what to do.  So the LA Lady has to go to fly over country and deal with the locals who look at her as if she were from another planet.

Yes, it is the fish out of water story.  Written by Diablo Cody, the screenplay takes on all the pathos and dynamics of a Lifetime movie.  Everyone yells at everyone else and no one truly understands the other until the last reel when it is all tied together in a matrimonial bow.

Sometimes, like at the dinner scene where the family had not been together in years, there is a promise of a spark such as in August: Osage County.  But, that spark is never fanned and the slow burn just sizzles out.  Everyone is mad at everyone else and few even remember exactly why.

Director Jonathan Demme is best known for The Silence of the Lambs and Philadelphia.  Both were intense dramas and both were two decades ago.  In Ricki he has truly lost his touch with his muse. There is promise with the characters but not with the delivery.

The film is desperately in need of an editing job at the screenplay level.  We expect a pop with a play by a young Oscar winning playwright and what we get are platitudes and tired motifs.  The film feels tired.

Truly the only reason to see this film is to marvel at how great of an actor Rick Springfield has become.  Most of his scenes are with Lady Meryl and he holds his own and betters her in more than a few instances.  Hollywood casting agents need to take notice and give him more roles.  He is deserving of accolades.

The film is confused in what it is trying to say.  It is written by Diablo Cody the writer of Juno.  Here she is just not up to that standard.  One never is sure exactly she is trying to say with her screenplay.  Ricki is an anti-establishment rock and roller who supports troops to the point she has an American Flag tattooed on her back.  Pete is a captain of industry who hides weed in his refrigerator. Julie is some kind of a traditionalist girl but wears a protesting t-shirt just about everywhere.  Every character seems to be a bewildered mess of contradictions.

All in all, Ricki and the Flame is a very well acted Lifetime style of a film with a bunch of witty lines.  It is the kind of film one would catch on a winter afternoon, nursing a bad cold.  One could even drift in and out of a Nyquil haze and still not miss much action or acting.  After seeing about 15 minutes of the film, you know how this all wil end.

Gary Murray started writing film reviews and entertainment articles in 1989. He has worked for the North Dallas Movie Review, Entertainment Showcase and TheCityWeb.com. Currently he is writing for PopSyndicate.com, BigFanBoy.com and Selig Film services.