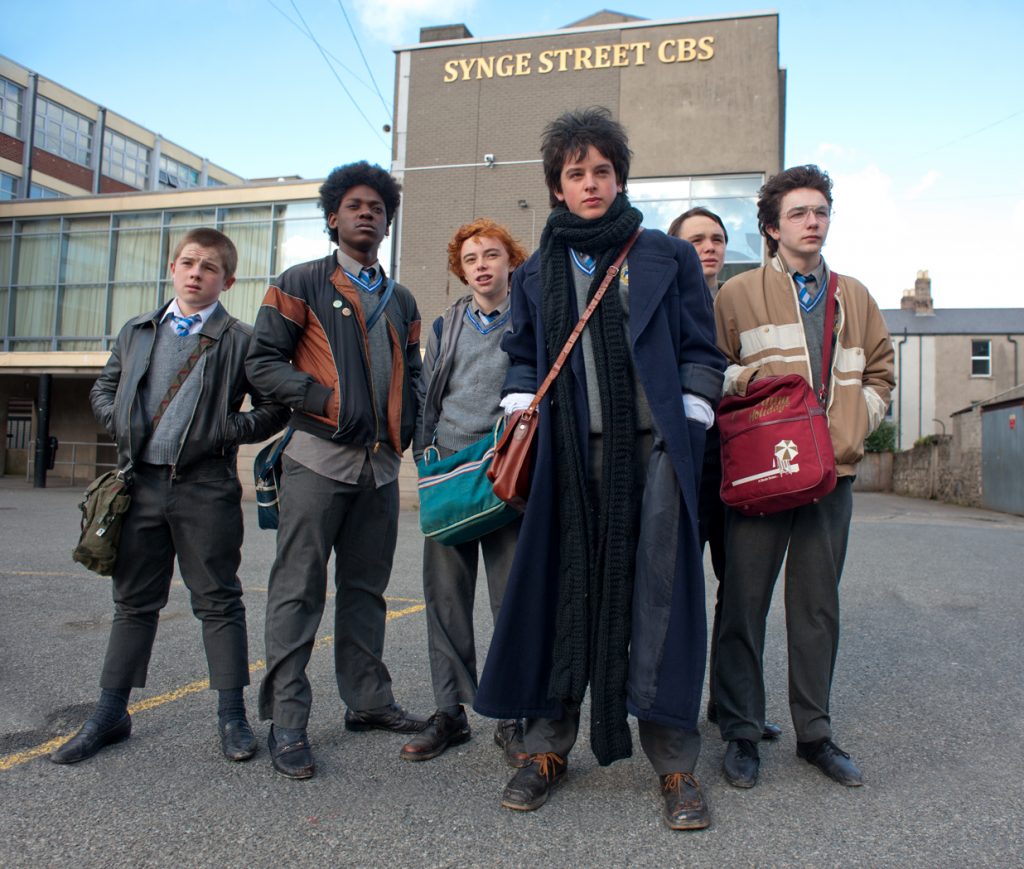 Written and directed by John Carney

To be totally honest, I like to be 100% cold before seeing a motion picture.  I do not like reading reviews, catching blog posts or watching any pre-production clips that are shown on entertainment news programs.  I really don’t even like seeing trailers.  It is best when there is little known about the film I am about to see.  The experience becomes a fresh one and exactly how the makers planned it, nor through some third party filter.  That is exactly how I experienced the new film by John Carney called Sing Street.

Conor (Ferdia Walsh-Peelo) is a 15 year-old Dublin kid in 1985.  His family has to make sacrifices for financial reasons and he must give up private prep school and go to the public school run by the church.  It is a very rough place, full of hard-edged boys who continuously smoke and fight.  The priests seem to care more about order than about learning.

Conor is lost in a world far outside his comfort zone and his element.  Eventually, he makes a single friend but is estranged by nearly all of the school.  Most nights he spends with his family, watching Top of the Pops, which features music videos by the pop sensation Duran Duran.  Conor’s order brother Brendan (Jack Reynor) sees the genius in their music and their video style.

One day, Conor notices a beautiful girl Raaphina (Lucy Boynton) across the street from his new school.  She is waiting for her boyfriend.  He finds her captivating and goes up to her, asking her to be in his music video much like the videos he watches with his brother.

There is only one problem—Conor has no band.

So, he goes about finding musicians from his neighborhood and school to be members of the group. His first discover is Eamon (Mark McKenna) a very bright kid with a massive amount of talent and musical instruments.  Then he recruits a rhythm section. Conor is to be the lead singer.

The film is about the band writing songs and being tight as a coherent group.  It is also about Conor finding his musical voice. The band eventually gets Raphina to be in their music videos.

It is all a part of the grand scheme to win her affections.  Brendan convinces Conor that the band needs to find their singular voice and not just be a copy band.  Conor and Eamon construct tunes that are prominently featured on the soundtrack.

But, Sing Street is also about Conor trying out different looks in an attempt to find his stage calling. He quickly goes through different styles from current video pop bands, mimicking their looks and mannerisms.  It parallels him trying to find out who he is as a man.  He also finds that rebellion is more interesting than being conformingly boring.

There is also the budding relationship between Conor and Raphina.  She aspires to be a model and wants to move to London in order to make it in her chosen career. They both have in common a desire to be something more than normal Ireland teens,

One of the best elements is the soundtrack.  Not only are there half a dozen original tunes by Sing Street but also there are classics by such stalwarts as The Jam, The Cure and Joe Jackson.  The tunes just jump off the screen in a dance craze of music video madness.  Director John Carney does a masterful job of capturing the time and the sheer joy

John Carney has made a nearly perfect movie about two things—young love and music.  He captures the anticipation, the joy, the revolution and the heartbreak of both with fire seldom seen in films shown stateside.  In a word, it feels honest.

Another beautiful aspect of the film is the capturing of Dublin as a character.  It is old and rusty yet a captivating place—a city that should be explored warts and all.  He captures this amazing town with a loving touch.

The cast is largely made up of unknown actors but Ferdia Walsh-Peelo is a name and a face that should be remembered.  He has to carry most of the film on his young shoulders but does so with a seldom seen grace.  In a scant few months he goes from being a boy to a confident angry young man.

His scenes with Jack Reynor especially ring true as if not only are they brothers but they are also friends.  The film needed much more interplay between the two men.  Both have passions but are on different parts of the same path.

Lucy Boynton Is a captivating young actress with girl next door looks yet certain sadness in her demeanor.  As the film goes along she goes from an object of affections to a frightened young girl. By the end, the audience finds that Conor and Raphina are much more kindred spirits than either one would admit.

Sing Street is a part of the best of 2016 and also is a part of by Top Ten list.  I do not know if it will stay by year’s end but it is only the second film from this year that I will own when it comes out on DVD.  I also know that I’ll pay to see it again and I will buy the soundtrack if one is available. That is a rarity in the 21st century.  In so many ways it is reminiscent of The Commitments, that film years ago about an Irish band. Both are films that should be viewed more than once.