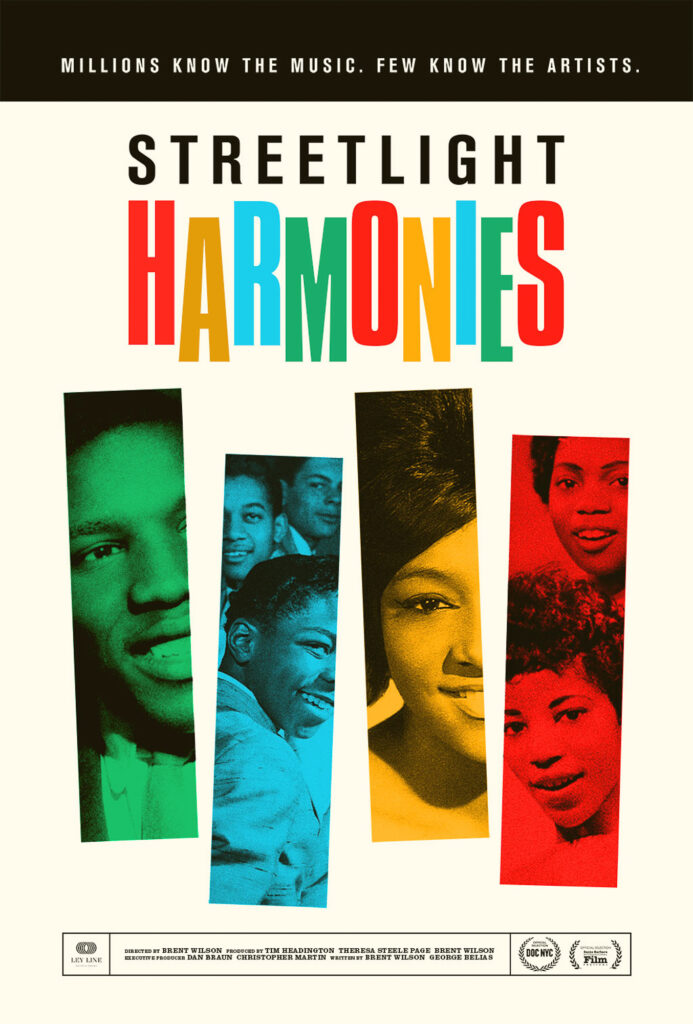 No other genre of music can conjure up the innocence of a nation, or the pangs of love quite like the timeless sounds of Doo-Wop. With the world going topsy-turvy and everybody having to stay indoors, I cannot think of a better documentary to spend your time with than Streetlight Harmonies. It’s so much fun to sway along to songs you forgot you even knew. This is one of the best documentaries I’ve seen on this type of music.

Streetlight Harmonies features the unmistakable falsetto leads, lilting harmonies, and deep backing vocals set to a bluesy street corner rhythm that created those distinct sounds. The film fills your ears with songs like “Stand by Me” covered by Straight No Chaser, La La Brooks, Charlie Thomas, and Vito Picone. Also “Tears On My Pillow” (Little Anthony & The Imperials), “Why Do Fools Fall in Love” (Frankie Lymon & The Teenagers), and so many more. This documentary is an endless jukebox of melodies and memories.

Interviews of the people that lived and created Doo-Wop are intertwined with amazing photos and rare footage of the actual performances. Excuse me as I name drop, but the film has interviews with the likes of Anthony Gourdine (Little Anthony and the Imperials), Al Jardine (The Beach Boys), Brian Wilson (The Beach Boys and Brian Wilson Band), Charlie Thomas (The Drifters), Sammy Strain (The Imperials, The O’Jays), Terry Johnson (The Flamingos), Diz Russell (The Orioles), Fred Parris (The Five Satins), Billy Brown (Ray Goodman and Brown, The Moments), Ron Coleman (The Broadways), Lois Powell (The Chantels), Fanita James (The Blossoms), La La Brooks (The Crystals), Janis Siegel (Manhattan Transfer), and Vito Picone (The Elegants). I could go on, but I’d run out of space.

Streetlight Harmonies is an entertaining journey through bands, songs, and harmonies that evoke both days gone by as well as current hits. The film uncovers a definitive period of music and the artists that defined it. I was blown away by the fact that currently, with over three hundred inductees in the Rock & Roll Hall Of Fame, only twelve vocal harmony groups are in that number. Millions of people know of the music, but few know the artists or their history that laid the foundation for rock and roll, rhythm and blues and built a bridge to The Civil Rights movement.

I give Streetlight Harmonies 5-stars. It’s a nice break from all the craziness of these modern times. And, I suspect it will be added to the Blu-ray libraries of most music lovers.