Here is Gadi Elkon’s review for THE BROKEN HEARTS GALLERY.

What if you saved a souvenir from every relationship you’ve ever been in? THE BROKEN HEARTS GALLERY follows the always unique Lucy (Geraldine Viswanathan), a 20-something art gallery assistant living in New York City, who also happens to be an emotional hoarder. After she gets dumped by her latest boyfriend, Lucy is inspired to create The Broken Heart Gallery, a pop-up space for the items love has left behind. Word of the gallery spreads, encouraging a movement and a fresh start for all the romantics out there, including Lucy herself.

The most romantic film of 2020 happens to be about break-ups and the pain they can cause.  The Broken Hearts Gallery strives to be a more unique and independent romcom.  The witty nature, diverse casting choices, and attention to details help push it above most typical romantic comedy fodder.  Writer/Director Natalie Krinsky has carved out a complete lead character who’s friends make sense and compliment the entire strong women vibe.  These girls don’t pine over guys and their friendship is deeper than any relationship they go through.

The cinematic choice to frame NYC and our characters in a slightly more real and dingy city landscape of adventure helped the film’s underlining thematic ideals.  I kept thinking of, “another man’S(woman in this case) trash is another’s treasure”.  The way in which regular everyday items become intricate and important makes the mixture with the art gallery world a nice connection.  The simple landscape elements in the film mirror the grungy nature of our hotel/gallery space that becomes the core of the film’s emotional link between our leads.  NYC is a subtle character but an important one.  It’s impact is also intertwined with Lucy’s core story of why she ventured to the Big Apple in the first place.  Nick’s journey to NYC also holds it’s own powerful importance.  Both these secrets are maintained hidden and their second half of the film reveal causes massive emotional pivoting by both our leads.  Their choices after this are really honest and ultimately lovable.

Geraldine Viswanathan’s Lucy is believable even in her most outrageous  or absurd choices.  Some may harp on her “diverse” looks but the real intrigue behind our lead is her witty charm.  Not to say the women in the film don’t showcase their sexuality.  The real gem of the film is that these are modern independent ladies who don’t define their happiness through the typical confines of romance.  Phillipa Soo’s Nadine and Molly Gordon’s Amanda are a hilarious roommate duo that nearly steal the film.  The charisma of Lucy mixed with Amanda’s cynic nature and Nadine’s overt sexual dominance as an open lesbian make this a powerful trio.  Their connective relationship is the film’s true background.  Add in sparkly eyed Dacre Montgomery’s Nick as our aloof “catch” and his VERY funny sidekick/best friend Marcos.  Arturo Castro’s performance as Marcos rivals the female trio with his quick dry witty performance.  Overall the film came across so much more intelligent and zingy with it’s comic humor choices.  Think more adult lunacy than campy cute.

Lastly, this film really connects because of the tremendous production and art design.  The film houses so many items of importance.  The way in which a flashback kissing booth interview space is connected to the random items makes the broken hearts gallery unique.  The concept and the execution of the lost love that is on display is really thoughtful.  As much care as Lucy puts into making these items feel special adds to the emotional arc she finally goes through.  Her hoarder mentality is a constant butt of Nick’s flirty attack jokes at Lucy and yet it’s that mentality that makes her so adorable.  The film does allow her growth as she finally breaks free of her fears by breaking free of all her possessions.  The more she covets other’s lost items in the gallery her home hoarding is literally ripped apart.  Her constant failures at love are finally violently destroyed when our little crazy caterpillar transforms into her one of a kind butterfly.

A romcom that really approaches the world with a thought-provoking eye and delivers a new form of romantic comedy.

Oh and if that doesn’t sell you than there is Bernadette Peters!!

Don’t miss out on this one! 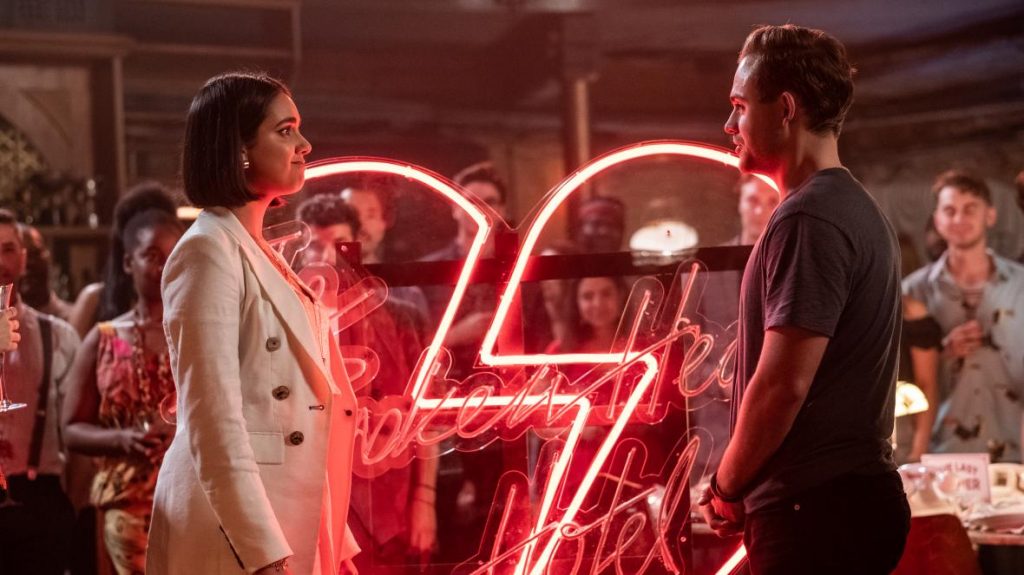 Written By
Gadi Elkon
More from Gadi Elkon
“I will not charm my tongue. I am bound to speak”, (Emilia...
Read More

BEN 10 VS. THE UNIVERSE: THE MOVIE – A DVD and Digital HD Review by John Strange