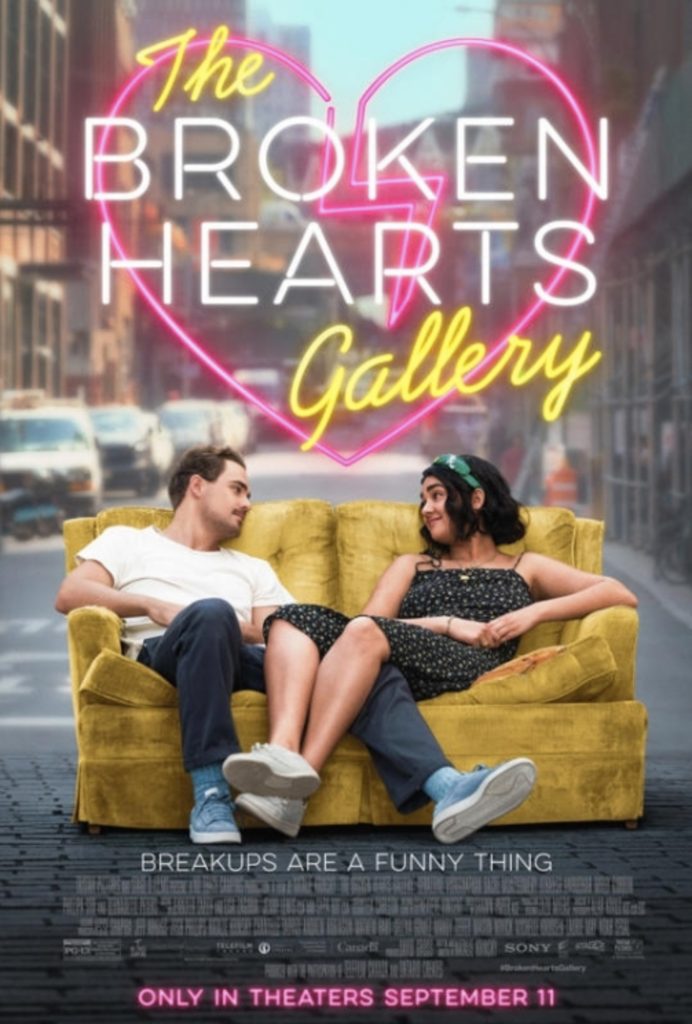 THE BROKEN HEARTS GALLERY – A Review by John Strange

Ever had your heart broken?  Did you save a memento to remember them by?  Lucy Gulliver (Geraldine Viswanathan) is the queen of saving these tchotchkes.  And since she appears to have terrible luck with men, her room is overloaded with them!

Lucy works in her dream job for Eva Woolf (Bernadette Peters) and thinks she is in the perfect secret relationship with her supervisor, Max Vora (Utkarsh Ambudkar).  That is until she sees his ex-girlfriend has returned to his life at a gallery event.

After making a fool of herself (and getting fired), Lucy jumps into a car she mistakes for her Uber.  In her tearful anger, she doesn’t listen to the driver’s protests that he wasn’t her driver, Alfonso.  So, Nick (Dacre Montgomery) drives her to her apartment building and listens, somewhat patiently, to her as she rants and raves about her situation.

That the two hit it off is kismet.  Nick is struggling to finish out and open a boutique hotel.  Lucy asks to help him, a request he resists but he finally relents.  Then Lucy has the epiphany of starting the Broken Hearts Gallery to help others tell the story of their personal heartbreaks on video and donating their cherished mementos to the gallery, all the while promoting the hotel.

As with all romantic films of this genre, we have the bad ex’s, and the great and true friends who support the stars.  This is true here, in spades.  Lucy’s roommates and best friends are Amanda (Molly Gordon) and Nadine (Phillipa Soo), two women who are amazing in their own right.  Amanda has a boyfriend, Jeff (Nathan Dales), who has a great part in that he never speaks but is always there!  Nadine is a serial dater/dumper but at heart a nice person despite this.

Nick has a team of guys helping him build-out his hotel led by Marcos (Arturo Castro), Jeff’s “wizard” who can craft just about anything they need (except the neon lights).  Marcos and Lucy hit it off instantly.  His wife, Randy (Megan Ferguson), is VERY pregnant as so very cool!  She, too, became a fan of Lucy.

The bad exes are “led” by, of course, Max Vora.  I found that his oily-ness creeped me from the get-go out (man-bun – UGH)!  He is an excellent actor but wow, what a character!

But the heart of this story is more than Lucy or Nick.  More than the pair and their friends.  The people who bring in the mementos of lost loves and give Lucy their amazing, lovely stories are the true heart of this film.

This is a sweet film.  I felt for each and every person who made their video of lost love, for Lucy and her foibles, and for all the great supporting characters.

The unsung heroes of this film, led by writer/director Natalie Krinsky, were the set dressers and prop department workers who came up with such cool tchotchkes for the people to bring to the gallery (and to load into Lucy’s bedroom).  They added an awesome dynamic visual component to the film.

And I would be remiss if I failed to mention the excellent performance by Sheila McCarthy as Lucy’s mother, Cheryl.  Her performance is absolutely spot on.

The Broken Hearts Gallery is a wonderful 5-star film.  Watch with the one you love or those close friends who will look at you and perhaps point at one or more of the lovely videos and say, “Yep, that’s you!”

MPAA Rating: PG-13 (for sexual content throughout and some crude references, strong language, and drug references)

BEN 10 VS. THE UNIVERSE: THE MOVIE – A DVD and Digital HD Review by John Strange