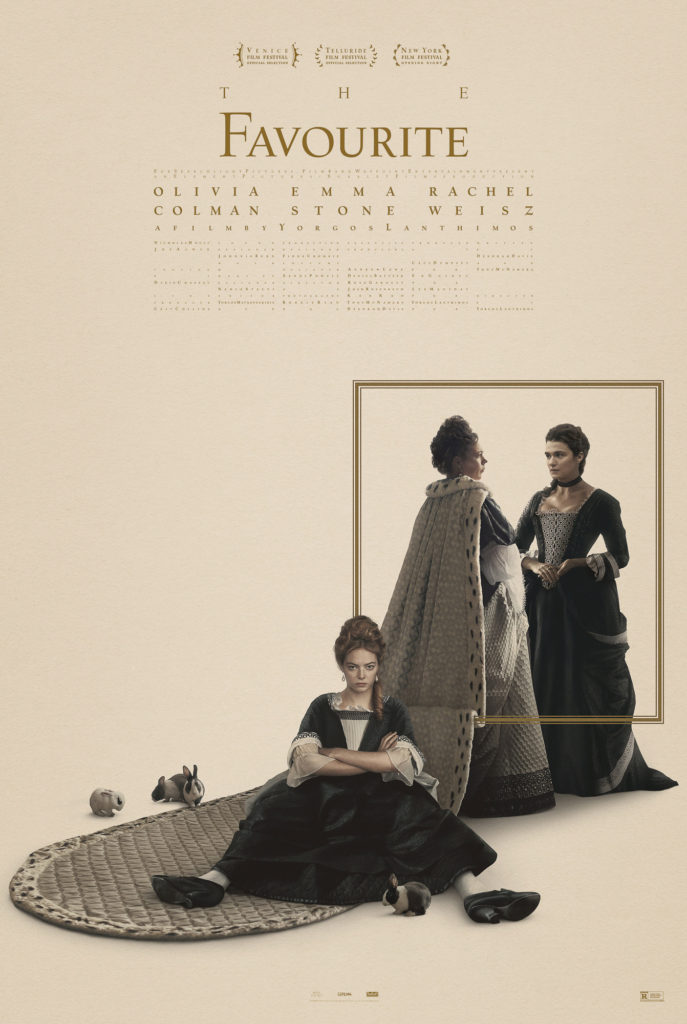 THE FAVOURITE – A Review by Cynthia Flores

Director Yargos Lanthimos is known for deep thinking art house films such as 2015’s The Lobster and 2017’s The Killing of a Scared Deer, so this new film set in early 18th century England is no exception.  The Favourite tells the story of frail Queen Anne of great Britain (Olivia Colman) and her close friend Lady Sara Churchill, Duchess of Marlborough (Rachel Weisz) who governs the country in its time of war in her stead.  When Lady Sarah's cousin Abigail Hill (Emma Stone) arrived filthily covered in mud and stripped of her life as a lady, she becomes a servant to her cousin.  She is educated and smart and learns the intrigues of court life quickly.  She starts out as being kind and a lady, but once she starts plotting to take her cousin's place, there is nothing she will not do to win.  In the end, she loses herself to stay on top.

The film is full of secret lovers to the queen.  First Lady Sara and then Abigail.  All the while England is at war with the French and the Tory party, lead by a much powdered and wigged Robert Harley, first Earl of Oxford and Earl Mortimer (Nicholas Hoult), want the war to be over because they are tired of paying the cost of the financing the war.  There are other storylines showing the vulgar opulence and everyday weird behavior of those at court.  However, the majority of the story is the triangle between the women and the struggle for power.

The Favourite is a period piece and looks good; what drove me nuts was the wide-angle lens that was used at what seemed like spontaneous times.  Most of which were indoors which gave the film a funhouse feel to it, and I don’t mean that in a good way.  Its use did not make sense, in fact, it felt like someone got a wide-angle lens for their birthday or Christmas and thought it was cool, so they threw it in for effect.  Let me tell you it was anything but cool.  It actually made me dizzy a few times and took me out of the moment of the film.

The Favourite is a dark story with few people to cheer for.  I did love a lot of the colorful dialogue when they were insulting each other and as I said the acting was top notch, but I can’t say I enjoyed this sad little film as much as I have loved the director's other pictures.  I give this art house romp a B- rating.
Directed by Yargos Lanthimos
Written By Deborah Davis, Tony McNamara
Rated R
Selig Rating B-
Running Time 1hr 59min
Drama / Comedy
Limited Release November 29th The Angelika Film Center Dallas & Plano, Alamo Drafthouse Cinema- Cedars
Starring: Olivia Colman, Emma Stone, Rachel Weisz, Nicholas Hoult
The Selig Rating Scale:
A – Excellent movie, well worth the price.
B – Good movie
C – OK movie
D – No need to rush. Save it for a rainy day.
F – Good that I saw it on the big screen but wish I hadn't paid for it.
Tags from the story
Emma Stone, Fox Searchlight Pictures, Nicholas Hoult, Olivia Colman, Rachel Weisz, The Favourite, Yargos Lanthimos
Facebook Twitter Pinterest
LinkedIn Email