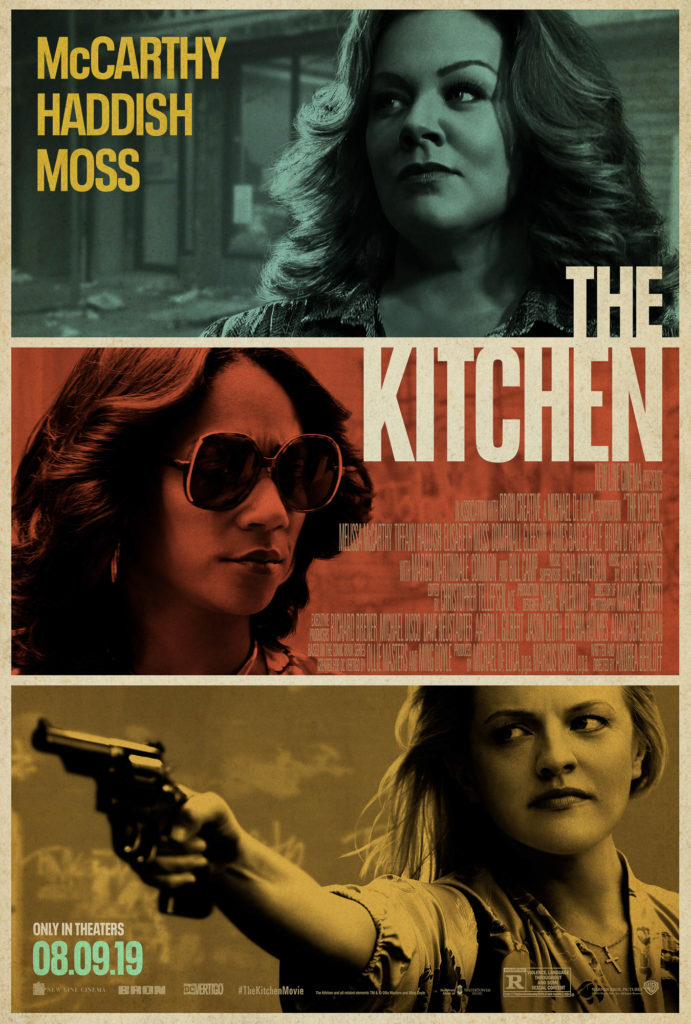 THE KITCHEN – A Review by Cynthia Flores

Based on a comic book short series of the same name, this new film from director Andrea Berloff is fantastic.  It’s been a long time since I can heap praise on such a violent movie.  The fact that it is led by women makes it more menacing.  In the movies, there’s a history of the concept of the femme fatale or the horrible witch.  Unfortunately, Hollywood paints these all as one-dimensional exaggerations that feed us a fear of uncontrollable, devious women.  The reality, of course, is that women lead complicated lives where they are sometimes good and sometimes bad, just like men.  The crime drama The Kitchen promises to give us a glimpse into the lives of three such women.

It’s the 70s and they are all married to men in the Irish mob in Hell’s Kitchen in New York City.  There is Rudy (Tiffany Haddish) who’s married to the philandering Kevin O’Carroll (James Badge Dale) who has his bitter old mother Hellen (Margo Martindale) living with them.  Then there is sad and battered Claire (Elisabeth Moss).  She is married to hothead and abusive Rob Walsh (Jeremy Boob) who thinks his wife is his personal punching bag.  Rounding out the trio of women in this story is Kathy (Melissa McCarthy) who’s the lucky one.  She is the only one with kids and married to the kindest man in the group.  Her husband is Jimmy Brennan (Brian d’Arcy James), and he’s the one that wants to move his crew up in the world of crime.  FBI agents Gary Silvers (Common) and Gonzalo Martinez (E.J. Bonilla) are the two responsible for busting Jimmy, Rob, and Kevin.  They have them under surveillance to catch them as they rob a liquor store.

These women are stuck in a turbulent situation once their husbands are arrested, put in jail, and sentenced to three years.  They’re trying to make the best of it.  However, the new Irish mob leader won’t or can’t afford to take care of them financially.  Also, there are no legit jobs they can hold down, so they feel like their backs are up against the wall.  As they make their way into the position of running that same Irish mob, we can sympathize with their plight.  They become the anti-heroes of this story set on the gritty streets of 1970s NYC.  We actually grow to like them much like the serial killer in the iconic cable show Dexter.

Winds up that Kathy has a head for fixing people’s problems and making them see things her way.  Ruby has the ambition to help grow their endeavors beyond anything their husbands could imagine.  And Claire is the one that changes the most.  She comes into her own with the help of Gabriel O’Malley (Domhnall Gleeson).  He’s the enforcer that comes back into town once the men are jailed.  He becomes the women’s muscle as they take over the business.  Gabriel also becomes Claire’s mentor in the art of killing as they fall in love.

The Kitchen is a morally complicated, violent, moody, and grim film.  It’s full of action and tense meetings with rival Italian gangs.  The spiral of violence the women are involved with leaves a sense of foreboding that sticks with you long after the credits have rolled.  The casting for this film is strong, you couldn’t have asked for a better mix of talented actresses.  Melissa McCarthy brings a gravitas to her portrayal of Kathy that keeps the film centered.  Comedian Tiffany Haddish as Ruby proves that she can handle dramatic parts.  And Elisabeth Moss is a revelation as Claire.  She provides the character with a delicate beauty within her rage as she transforms from a victim to a stone-cold killer.

I give The Kitchen a B+ rating.  It’s the film set in the 70s this summer that’s actually worth seeing (sorry, Tarantino fans; this one’s got the balls and they’re swinging chest high).