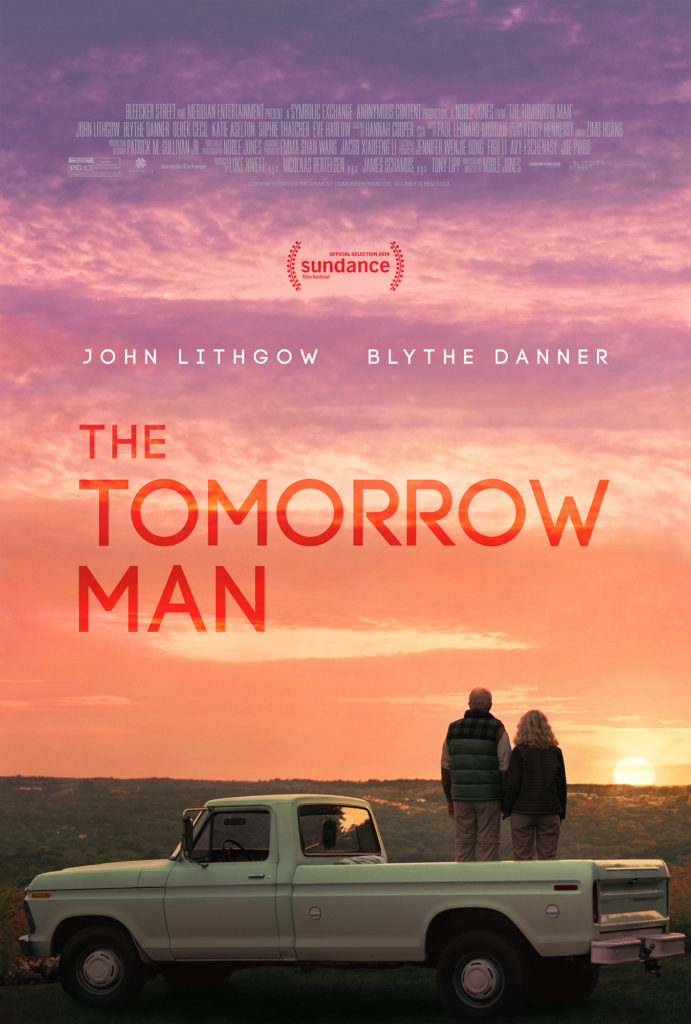 THE TOMORROW MAN – A Review by Cynthia Flores

This is the feature film debut for writer/director Noble Jones.  It’s a great cast to start a career with.  John Lithgow as Ed Hemsler a man “on the wrong side of sixty” as he says spending his life preparing for a disaster that may never come.  Living a solitary life out in rural Iowa.  He lives alone in his ideally kept home.  Choosing to spend his budgeted income on his hidden doomsday stash room instead of buying the medicine that he needs.  He has his routines of shopping strategically, posting on the web with other “Preppers” (people who believe a catastrophic disaster or emergency is likely to occur in the future and they make active preparations for it) and watching TV in his recliner in his boxer shorts.  Other than difficult conversations with his son on the phone, he is alone.  That is until one day he notices a good looking older woman named Ronnie Meisner (Blythe Danner) who shops at the same, small grocery store he does.  He sees that she keeps buying what looks like “Prepper” supplies and paying with cash to stay off the grid.  So one day he purposely parks his old Ford Pickup truck too close to her little compact car.  That way, he can apologize for it and introduce himself to her.  What follows is a quirky and tender senior love story of two completely different people that complement each other perfectly.  Each one bringing out the best in the other with interesting results.  I refuse to give away the ending but trust me, it’s a blast.

Noble Jones has written a really funny and tender story of love in later life.  He has also directed The Tomorrow Man to show the subtle nuances that happen between two older people that are set in their ways try to change.  The cinematography for this small independent film is beautiful and makes good use of the landscape of fields that surround them.  Also, the natural chemistry between Lithgow and Danner is sublime.  They bring these two characters to life in a way that makes you root for them to make it together.  This is not a film for just the geriatric set.  Anyone looking to enjoy a sweet and funny romance movie this weekend would enjoy The Tomorrow Man.  I give this film a B+ rating.