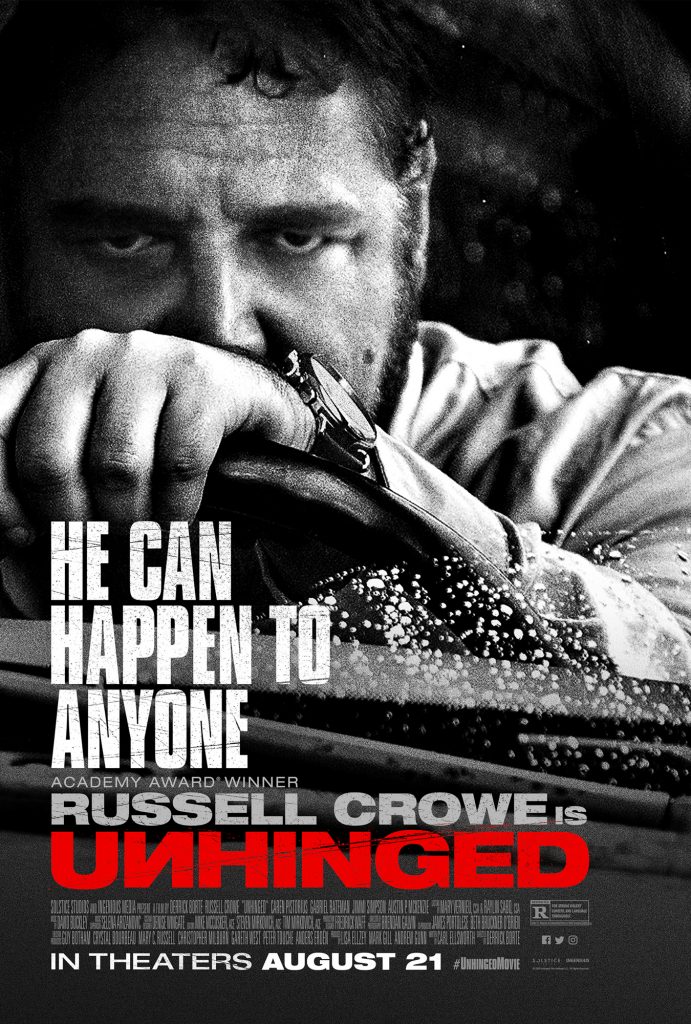 UNHINGED – A Review by Cynthia Flores

Maybe it was because it’s been the better part of five months since I’ve seen a movie screening in a movie theater? Perhaps it was the wonderful smell of fresh movie popcorn that greeted me at the door? Or just maybe it’s scary fun to watch Russell Crowe play an overweight menacing madman with a thick Leghorn Foghorn southern accent? Ok, it was definitely the hot buttered popcorn that you have to eat as you watch Russell Crowe kill people that did the trick for me.

At the beginning of the film, we see The Man (Russell Crowe) nonchalantly park out front of a beautiful house. He pulls out a hydrocodone bottle, pops a few pills in his mouth, and crunches down loudly on them. This menacing way of taking pain pills with no water and just grinding them down between his teeth reminded me of Stansfield’s character, portrayed by Gary Oldman, the corrupt and mentally unhinged DEA agent from the 1994 classic film Leon: The Professional. Now don’t get me wrong. Russell Crowe’s character of The Man is too one dimensional to compete with the iconic Stansfield. Still, he nails the brutality of someone with nothing to lose and strung out on pain pills.

After watching The Man casually walk up to the house and smash the door with a hammer, we watch as he uses said hammer to murder the couple in the house. Setting it ablaze with the gasoline he brought with him. He then lumbers back to his big pickup truck and drives away. He’s somebody you definitely don’t want to cross paths with. After this brutal opening, we see a montage of psychologists and early morning radio personalities talk about increased road rage violence. They chalk it up to too many people going too many places simultaneously and blowing their tops over small infractions. This sets up this thriller.  We have our bad guy, so we have to introduce the innocent girl, Rachel (Caren Pistorius), now. She’s a single mom having a bad day dealing with her divorce, losing her salon, and dropping off her kid late to school again because she overslept. She loses her temper during heavy traffic on the wrong person. You guessed it. She honks loudly at The Man. This infraction and her inability to simply apologize to The Man as they are stuck side by side in traffic, discussing the rude honking make her the target of his rage.

This film is directed by German-born director Derrick Borte. He’s the one that was able to make cuddly comedian Jim Gaffigan look desperate and menacing in the 2019 crime thriller film American Dreamer. So, given someone to work with like the Academy award-winning Russell Crowe and making him look fierce as f*** is right in his wheelhouse.

If you are so inclined, Unhinged is the perfect film to see in a cold movie theater this summer and enjoy on the big screen as you practice social distancing. Am I saying that because it’s going to be a classic? Like a stallion of thrillers such as 1991’s The Silence of the Lambs, absolutely not. This film is a guilty pleasure and a workhorse of the thriller genre. This means it’s not fancy, but it gets the job done. You’ll sit on the edge of your seat as Rachel battles this evil man, and you will cheer for her as she fights for her life. End of story.

I give Unhinged a 4-star rating. It may actually encourage people to drive a bit kinder out on the road.