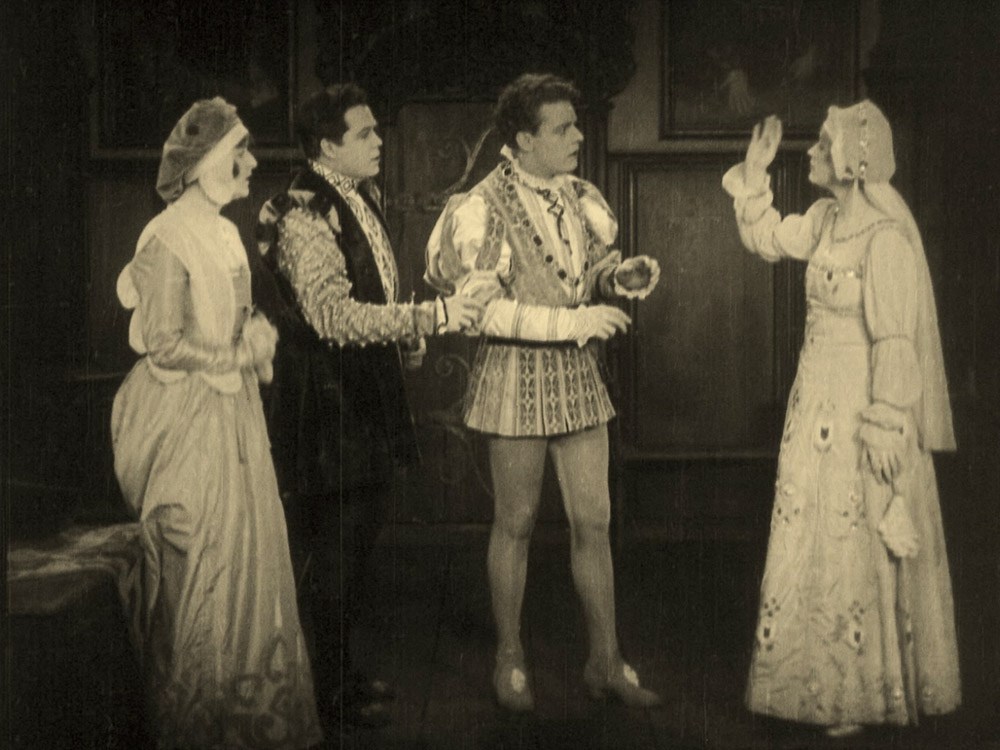 WHEN KNIGHTHOOD WAS IN FLOWER – a Blu-ray/DVD Review by John Strange
Marion Davies was one of the best actresses of her time.  The era of silent films was a tough time for actors and actresses. They had to get the story across to the audience without the use their voices.  Dialogue was given to the audiences in writing.  This tended to limit the characters speeches as there was simply a limit to how much the audience could read in the time allowed.
This film, set in the court of Henry VIII (Lyn Harding), portrays Miss Davies as the sister of the king, Mary Tudor.  The king has plans to marry her off to the aged French king, Louis XII (William Norris).  Mary has other plans (especially after being shown a painting of the prospective groom).  Her desire is energized when she encounters the dashing young guardsman, Charles Brandon (Forrest Stanley).
At first she is attracted to the young man.  As time goes by her attraction turns to desire and then love.  His feelings for her grow just as fast.  When he saves her from armed assailants, their love is cemented.
Mary's plight is the heart of this film.  Will she be forced to marry Louis XII or will she get to marry her true love Charles Brandon?  As in all films of this genre, there has to be a villain.  Here the bad man is the Duke of Buckingham (Pedro de Cordoba).  It is he who instigated the attack that led to the two young people admitting their love for one another.
As with any historically-themed film, the story meanders around the story of our heroes with bits here and there added to make the story more interesting.  How close to the reality of their love story does the film get?  The historical facts that she married the King of France and then Charles Branson are accurate.  Details are close enough that I was satisfied.  After that, who cares?
The film's plotline isn't really any different than the movie's of today.  Perhaps the only real difference is that you have to pay closer attention to the screen to read what is going on in the scenes.  Again, not that much different from watch close captioned foreign films.
Ben Model created a Kickstarter campaign in early 2016 to raise the funds to get the last remaining nitrate copy of the film transferred to digital format.  The 2K digital scan was made for the project by the video lab at the Library of Congress, the archive where the print is stored and has been preserved.  Ben also wrote a new score for the film.  It is a great sign to me that his need for $3400.00 was met and exceeded by the people who helped fund the project.  They raised $11,928.00!
Why do I think you should watch this film?  I am a lover of film history.  This film stars Marion Davies, William Randolph Hearst's, well, his 'live-in companion' (as the relationship is described in the Wikipedia article on this film).  Mr. Hearst and his Cosmopolitan Productions produced the film which was directed by Robert G. Vignola (who directed several of Miss Davies films).
It was distributed theatrically by Paramount Pictures (then known as Famous Players-Lasky Corporation).  Finally, this was William Powell's second film role.  He was to become well known in Hollywood for his portrayals of such characters as Nick Charles in the Thin Man series of films (with Myrna Loy and their amazing well trained dog Asta).
I admit that silent films aren't for everyone but if you enjoy them, then this one should most certainly be on your list!
Directed By:
Cast:
Extras:
Specifications:
Runtime:
Studio:
Release Date:
Region:
Website:
MPAA Rating:
Selig Rating:
Selig Rating Scale:
BRAND NEW: Should add to your DVD collection at any cost
SALE ITEM: Worth owning, but try to catch it a sale
SECOND HAND: Plan to get it, but wait to buy it used
RENTAL: Worth taking a look at, but not owning
COASTER: Pick it up at a garage sale and use it for drinks
PULL!: Makes a great Trap Shooting target
Tags from the story
Flora Finch, Forrest Stanley, Lyn Harding, Marion Davies, Robert G. Vignola, Undercrank Productions, WHEN KNIGHTHOOD WAS IN FLOWER, William Powell
Facebook Twitter Pinterest
LinkedIn Email

Written By
John Strange
More from John Strange
The Dallas Summer Musicals invited us down to participate in a special...
Read More