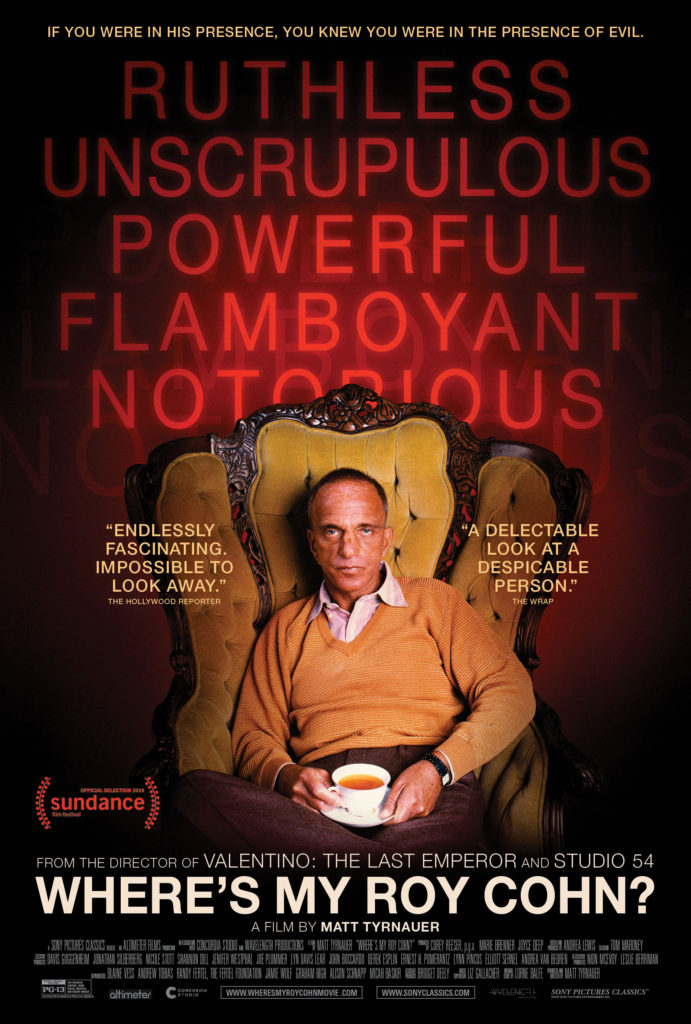 WHERE’S MY ROY COHN? – A Review by Cynthia Flores

This is the new film from director Matt Tyrnauer who brought us the brilliant 2008 documentary Valentino: The Last Emperor.  It impresses me that he chose to go from a man that embodied beauty and the celebration of it through clothing to a man like Roy Cohn that embodies hypocrisy and amoral power.  In the film, someone actually says that “Roy’s contempt for people, his contempt for the law was so evident on his face, that you knew you were in the presence of evil.”  That, in a nutshell, tells you what you are in for watching this film.

Roy Cohn is one of the most controversial and influential American men in the twentieth century.  He was a ruthless and unscrupulous lawyer and a political power broker.  His twenty-eight-year career started with acting as chief counsel to Senator Joseph McCarthy’s communist-hunting subcommittee to molding the career of a young Queens real estate developer named Donald Trump.  Cohn worked for the mob in New York during the day and then dined with the famous and rich at night.

Cohn formulated his playbook for life in the ’50s but it is still used by his proteges today.  He always said attack: never admit blame or apologize.  Use favors and fear to ensure support for your objectives, whatever they may be.  Expertly manipulate the media to gain advantage and destroy your opponents.  Lie shamelessly, invalidating the idea of truth.  He believed in weaponizing lawsuits, evading taxes and bills, and most importantly, to inflame the prejudices of the crowd by scapegoating defenseless people.  After seeing this documentary, I understand the fictionalized version of Roy in Tony Kushner’s Pulitzer Prize-winning play Angels In America a lot better.  In the play, he was a self-hating gay man that helped lead the crusade to hound homosexuals publicly.  In reality, he was worse, once he had his first taste of power alongside Senator Joseph McCarthy during the anti-Communist witch hunt, the dye was cast.  He would spend the rest of his life doing whatever it took to be a man that wielded power no matter who he hurt.

This is a deeply researched film and uses lots of material never publicly seen.  People that have never heard of Cohn’s story will be surprised at the sizable impact he continues to have on us as a nation, despite being dead from aids for decades.  I give Where’s My Roy Cohn? a B+ rating because it’s an intensive study of a dangerous man.