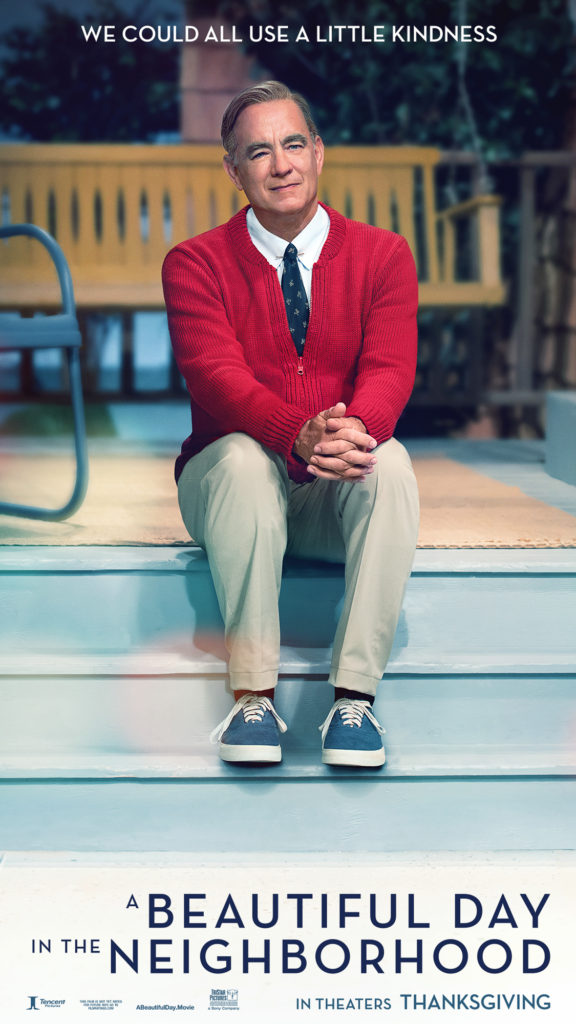 A BEAUTIFUL DAY IN THE NEIGHBORHOOD – A Review by Cynthia Flores

Tom Hanks is fantastic portraying Mr. Rogers in A Beautiful Day in the Neighborhood.  This is the new film from director Marielle Heller who brought us last year’s dramatic hit Can You Ever Forgive Me.  She does such an excellent job of honoring Mr. Rodgers’s legacy with this timely story of kindness triumphing over cynicism.

The film is based on a true story of the real-life friendship between Fred Rogers and a magazine writer named Tom Junod.  In this movie, the jaded writer is named Lloyd Vogel (Matthew Rhys).  His editor, Ellen (Christine Lahti), feels he needs to learn to be more balanced in his stories.  He needs to learn not to always do such a hatchet job on everyone.  So to help his reputation, he’s assigned to do a small piece as part of a bigger story on Heroes.  Much to Lloyd’s dismay, he is tasked to do a profile on Fred Rogers.  One of the best lines in the film is when Lloyd’s wife Andrea (Susan Kelechi Watson) finds out and tells him to be nice.  “Please don’t ruin my childhood,” she tells Lloyd as he leaves to start his interview.

A Beautiful Day in the Neighborhood shows us Fred Rogers through Lloyd’s eyes.  We get to know Fred slowly as he relates to Lloyd and the world around him.  Wherever he goes, Lloyd sees how his brand of kindness and love affects the world around him.  The world responds back with such affection that Lloyd must come to terms with Fred as an iconic figure, as America’s most beloved neighbor.  Knowing Fred changes Lloyd in ways he would never have imagined.  He faces the fact that he must overcome his skepticism and learn about forgiveness.

A Beautiful Day in the Neighborhood takes the unconventional way of telling Fred Rogers’ story by telling us Lloyd’s instead.  We get to see behind the camera and sets of the show as Mr. Rogers tapes his episodes because Lloyd is there to do his interview.  We understand that Fred Rogers is as good as his TV persona because Lloyd is watching his every move.  And we are touched to the point of tears as Fred Rogers befriends this damaged man.

I give A Beautiful Day in the Neighborhood an A rating because of it continuing Fred Rogers’ legacy of loving thy neighbor in a world that needs it now more than ever.