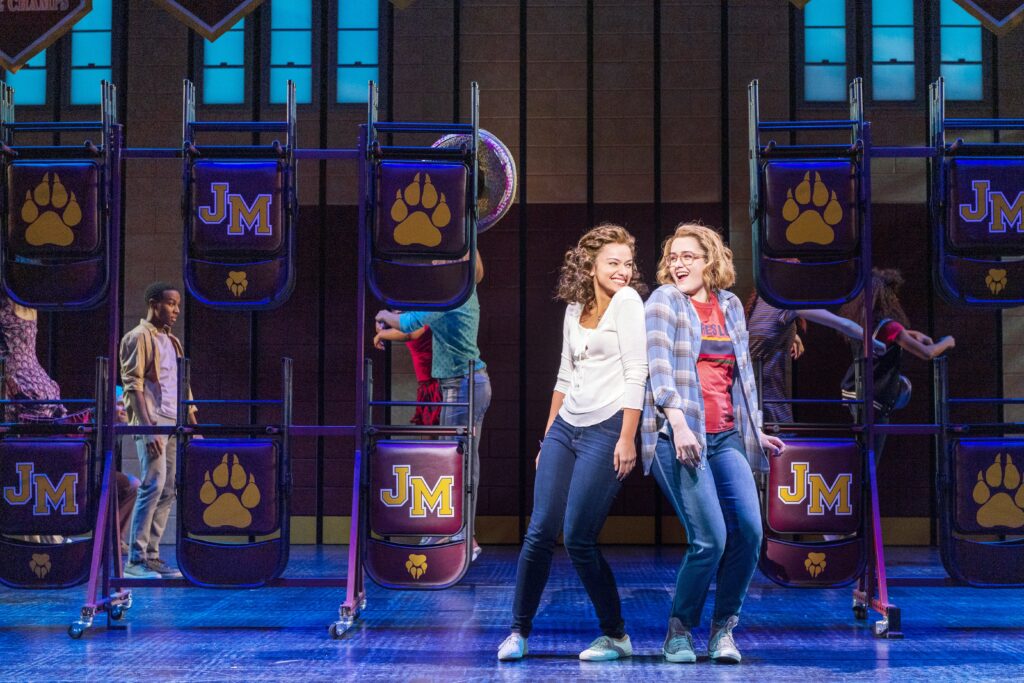 The nonprofit AT&T Performing Arts Center today announced the 2020/2021 season of its Broadway Series, featuring THE PROM; SUMMER: THE DONNA SUMMER MUSICAL; SISTER ACT; WAITRESS and WHAT THE CONSTITUTION MEANS TO ME. Season subscribers will also have the option to add Rodgers and Hammerstein’s OKLAHOMA! and HADESTOWN to their season subscription.

This season’s lineup is a stellar selection of Broadway hits. It represents 19 Tony Award nominations; one Grammy nomination and one Obie Award winner for Best New Play.

This is the second season of the groundbreaking partnership between Dallas Summer Musicals and the AT&T Performing Arts Center in which Rodgers and Hammerstein’s OKLAHOMA! and HADESTOWN (winner of eight Tony® Awards), optional add-ons, will be presented at the Winspear Opera House. Each season, DSM will present up to four weeks of Broadway in the beautiful Winspear Opera House on the Center’s campus in the Dallas Arts District. Season subscribers are among the first to enjoy the benefits of this exciting collaboration between these two beloved Dallas institutions.

“This season is a lineup of the newest, freshest and most exciting shows out there,” said Debbie Storey, president and CEO of AT&T Performing Arts Center. “Most of these productions are seeing their Dallas premieres, and all will be seen for the first time in the Winspear Opera House, the best stage for Broadway in North Texas.”

Broadway Series subscribers enjoy free ticket replacement, discounted pre-paid parking rates and the Center’s inter-show ticket exchange, which provides the flexibility to exchange tickets for one show to another in the season (limit one exchange per season).

Members of the Center enjoy a wide range of exclusive benefits making this Broadway experience better than ever before. Member benefits include priority access to the best available seats, access to the PNC Members Lounge for complimentary beverages at each performance and access to the Platinum Circle orchestra seating for Platinum Circle members. Membership donations not only help the nonprofit Center bring the very best in performing arts to North Texas, but also support the Center’s community and education programs, including Community Partners which provides free tickets to those who would otherwise not have access. To join with a membership donation, visit attpac.org/support or call Membership Services at 214-978-2888.

Information is available at www.attpac.org/broadway. Subscriptions may also be purchased by phone at 214-880-0202, or in person at the AT&T Performing Arts Center Winspear Opera House Box Office at 2403 Flora Street. The Box Office is open 10 a.m. – 4:30 p.m. Monday through Friday and before performances – closed Saturdays and Sundays.

Everyone’s invited to the joyous Broadway hit that New York Magazine calls “smart and big-hearted” and The New York Times declares it “makes you believe it musical comedy again”! THE PROM is a new musical comedy about big Broadway stars on a mission to change the world and a love that unites them all.

Variety raves, “It’s so full of happiness that you think your heart is about to burst.” And The Hollywood Reporter cheers, “It’s comic gold!”

You belong at THE PROM!

Say those words, and you’ll immediately feel the beat, the spirit, the heat of the legendary Donna Summer. Her songs smashed every record. Her story shattered every barrier. Now, the queen arrives direct from Broadway.

After a twice extended, sold-out run at San Diego’s celebrated La Jolla Playhouse, SUMMER: The Donna Summer Musical, partied on Broadway at the Lunt-Fontanne Theatre and is now strutting its way across North America on a National Tour.

She was a girl from Boston with a voice from heaven, who shot through the stars from gospel choir to dance floor diva. But what the world didn’t know was how Donna Summer risked it all to break through every barrier, becoming the icon of an era and the inspiration for every music diva who followed. From Janet Jackson to Beyoncé, they all began with Donna.

Three actresses play the role of musical icon Donna Summer at different points in her life as “Diva Donna,” “Disco Donna” and “Duckling Donna,” while an inexhaustible ensemble of almost entirely women tear up the stage.

Featuring choreography from Tony Award winner Sergio Trujillo for Ain’t Too Proud, and directed by Des McAnuff, the Tony Award®-winning director of Jersey Boys and The Who’s Tommy, SUMMER takes us through her tumultuous life and tempestuous loves. Including a mega-watt dream list of musical hits—including “Bad Girls,” “MacArthur Park,” “She Works Hard for the Money,” and “Last Dance”—SUMMER makes Fall the hottest season of all.

Sister Act is the feel-good musical comedy smash based on the hit 1992 film that has audiences jumping to their feet! Featuring original music by Tony- and eight-time Oscar winner, Alan Menken (Newsies, Beauty and the Beast, Little Shop of Horrors), this uplifting musical was nominated for five Tony Awards, including Best Musical.

When disco diva, Deloris Van Cartier, witnesses a murder, she is put in protective custody in the one place the cops are sure she won’t be a found: a convent! Disguised as a nun, she finds herself at odds with both the rigid lifestyle and uptight Mother Superior. Using her unique disco moves and singing talent to inspire the choir, Deloris breathes new life into the church and community but, in doing so, blows her cover. Soon, the gang is giving chase, only to find them up against Deloris and the power of her newly found sisterhood.

Filled with powerful gospel music, outrageous dancing and a truly moving story, Sister Act will leave audiences breathless. The cast is chock full of amazing roles for women of all ages, making this a perfect choice for high schools and community theatres. A sparkling tribute to the universal power of friendship, Sister Act is to REJOICE!

Meet Jenna, a waitress and expert pie-maker who dreams of a way out of her small town and rocky marriage. Pouring her heart into her pies, she crafts desserts that mirror her topsy-turvy life such as “The Key (Lime) to Happiness Pie” and “Betrayed By My Eggs Pie.” When a baking contest in a nearby county — and a satisfying encounter with someone new — show Jenna a chance at a fresh start, she must find the courage to seize it. Change is on the menu, as long as Jenna can write her own perfectly personal recipe for happiness.

“WAITRESS is a little slice of heaven!” says Entertainment Weekly, and is “sweet, sassy and passionate,” according to New York Magazine.

“It’s an empowering musical of the highest order!” raves the Chicago Tribune.  Don’t miss this uplifting and hilarious musical celebrating friendship, motherhood, and the magic of a well-made pie.

WHAT THE CONSTITUTION MEANS TO ME

Direct from Broadway, the 2019 Tony® nominated Best Play and Pulitzer Prize finalist, What the Constitution Means to Me, by famed writer Heidi Schreck, arrives Dallas for a strictly limited engagement.

Playwright Heidi Schreck’s boundary-breaking play breathes new life into our Constitution and imagines how it will shape the next generation of Americans.

Fifteen year old Heidi earned her college tuition by winning Constitutional debate competitions across the United States. In this hilarious, hopeful, and achingly human new play, she resurrects her teenage self in order to trace the profound relationship between four generations of women and the founding document that shaped their lives.

Schreck’s timely and galvanizing play, directed by Oliver Butler, became a sensation off-Broadway last fall before transferring to Broadway where it received two Tony Award® nominations among countless other accolades. See the play The New York Times hails as “not just the best play on Broadway, but also the most important.”

Welcome to HADESTOWN, where a song can change your fate. Winner of eight 2019 Tony® Awards, this acclaimed new musical by celebrated singer-songwriter Anaïs Mitchell and innovative director Rachel Chavkin (Natasha, Pierre & The Great Comet of 1812) is a love story for today… and always.

HADESTOWN intertwines two mythic tales — that of young dreamers Orpheus and Eurydice, and that of King Hades and his wife Persephone — as it invites you on a hell-raising journey to the underworld and back. Mitchell’s beguiling melodies and Chavkin’s poetic imagination pit industry against nature, doubt against faith, and fear against love. Performed by a vibrant ensemble of actors, dancers and singers, HADESTOWN is a haunting and hopeful theatrical experience that grabs you and never let’s go.

Over 75 years after Rodgers & Hammerstein reinvented the American musical, this is OKLAHOMA! as you’ve never seen or heard it before – reimagined for the 21st century.

Stripped down to reveal the darker psychological truths at its core, Daniel Fish’s production tells a story of a community circling its wagons against an outsider, and the frontier life that shaped America. Upending the sunny romance of a farmer and a cowpoke, this OKLAHOMA! allows the classic musical – and our country – to be seen in a whole new light.

Funny and sexy, dark and jolting, “this is the OKLAHOMA! that was there all along.” (New York Magazine) The Daily Beast says “Forget your traditional idea of Oklahoma! Daniel Fish’s daring, brilliant, utterly absorbing re-interpretation is dark and different—brilliantly so.”

Age Recommendation: Due to mature content in this production, it is recommended for children ages 12 and up. This production contains fog, loud gunshot effects, moments of darkness, and violence.

The Dallas Film Society today announced the full schedule of film selections for the 10th edition of the Dallas International Film Festival. The…