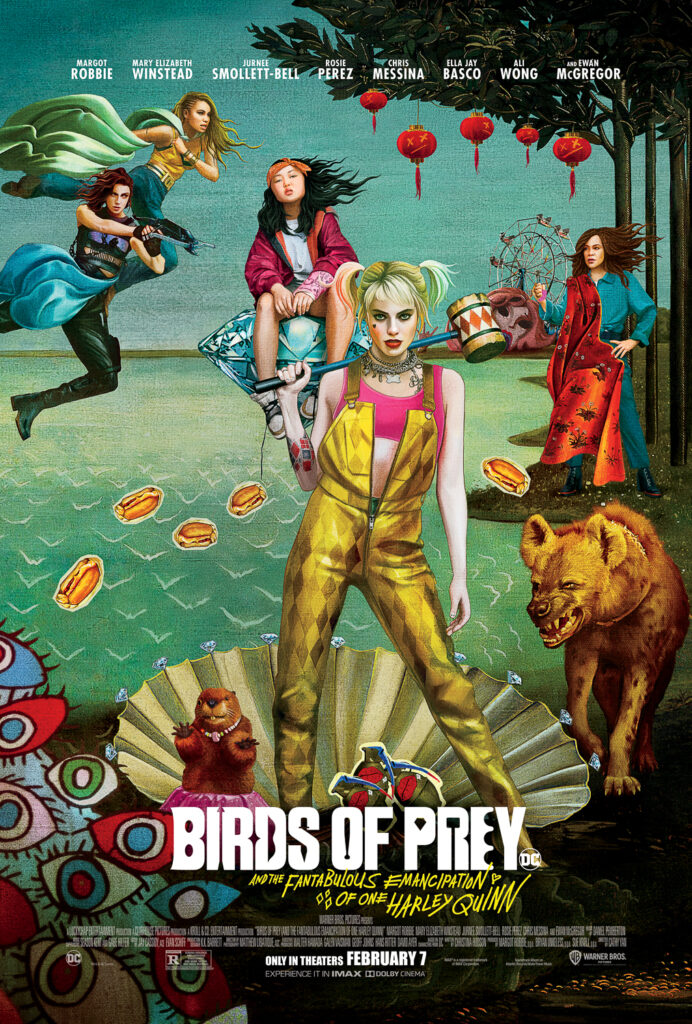 BIRDS OF PREY – A Review by Hollywood Hernandez

Birds of Prey is a quirky action film with plenty of laughs and plenty of action. The movie starts with a narrative from Harley Quinn, who’s played by Margot Robbie, where she describes her version of her break-up with The Joker. Now that she no longer has Joker’s protection she’s wanted by every criminal-type in Gotham City and a lot of cops, mainly Rosie Perez’s character, Detective Montoya.

Then the plot gets rolling when the evil Roman Sionis, aka Black Mask, played by Ewan McGregor, puts out a bounty on a little girl named Cass, 13-year-old actress Ella Jay Basco, and that’s when the movie kicks into overdrive. The little girl has swallowed a priceless diamond and there is nothing that Black Mask and his henchmen won’t do to retrieve it.

A singer at Roman Sionis’ club has an ear-piercing vocal range and some serious street fighting skills. She is known as Black Canary and played by young New York actress Jurnee Smollett-Bell. The rest of the kick-butt girl crew consists of Mary Elizabeth Winstead as Huntress, who’s hellbent on revenge after her entire family is killed in front of her and Rosie Perez’s Detective Montoya, who gets kicked off the police force.

All of the ladies are really good in their roles but it’s the badder than before Margo Robbie, who plays the demented Harley Quinn who has the blackest soul with a heart of gold. She doesn’t believe in anything and has the morals of a jackal, which by the way Harley has one as a pet. In the end, she just wants to be liked.

Birds of Prey is rated R and runs 1 hour and 49 minutes. The movie is a guilty pleasure. It will have you laughing at things that you really know you shouldn’t, but you won’t be able to help yourself.

On my “Hollywood Popcorn Scale” I rate Birds of Prey a JUMBO.

This film was the centerpiece screening at The Asian Film Festival of Dallas 2017. Apparently, it was one of the highest grossing movies…