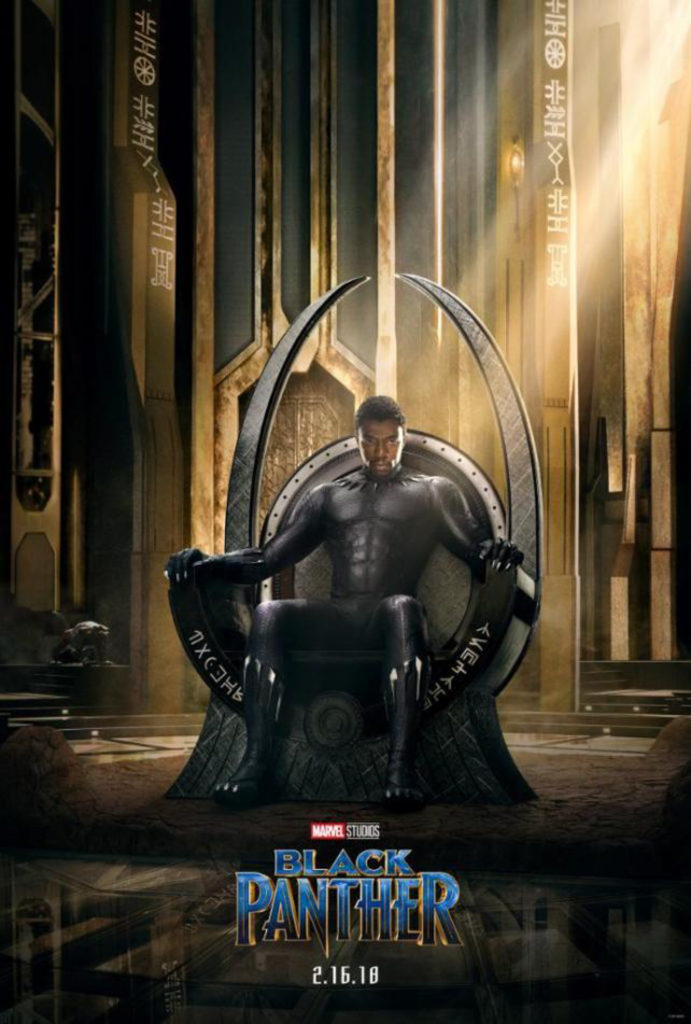 BLACK PANTHER – A Review by Hollywood Hernandez
The first thing people will want to know about Black Panther is does it live up to all the hype surrounding it? Well, the answer is a very unabashed, yes! You have never seen a movie like this one. It is Marvel's first masterpiece on the big screen.
Comparing it to the first super hero movie with a black lead character, Blade in 1998, Black Panther is the first major comic book movie with an almost entirely black cast. The movie also presents the women in the film in a positive light as warriors and as royalty. This is a movie that has been long overdue for a time that blacks and women are achieving great things in today's modern history. And it's not just a "black movie"; it's an eagerly anticipated film for all movie-goers.
Chadwick Boseman is regal as T'Challa/Black Panther. He is the heir to the throne of Wakanda, a country with the most advanced technology in the world. The African country has to be kept hidden from the rest of the world because of that advanced technology, which they fear could end up in the wrong hands. Those fears are realized when a traitor, Erik Killmonger (Michael B. Jordan) betrays his nation and sells the secrets and the raw materials to make advanced weapons to Ulysses Klaue (Andy Serkis), the only outsider to ever see Wakanda and who knows about the country’s advanced technology.
T'Challa is unique because unlike the other characters in the Marvel Universe who simply fight for themselves, he is also a king and he has to balance his time away to fight evil with his time as the king of Wakanda. His dual roles force him to travel between two separate worlds and he is torn between the two.
Lupita Nyong'o plays Nakia, the "new school warrior" who devotes her time to helping the less fortunate of Africa and also the object of T'Challa's affection, while Okoye (Danai Gurira) is the "old school warrior". She plays the queen's general and is fiercely loyal to both her queen and her country. The two actresses do a marvelous job of portraying strong women who support each other for a common goal.
The remainder of the cast, including Angela Bassett and Forest Whitaker, are equally strong and the vision of a current day African country, that is like none we've ever seen before in a movie, is created by director Ryan Coogler (Creed and Fruitvale Station). The director paints a painstakingly detailed tapestry of a royal African nation, weaving in colors like royal purple and lush greens. The cinematography is a treat to watch on the big screen.
As a comic book/super hero movie Black Panther delivers, but the quality of the film is so much more than the standard action movie. According to industry sources, the movie has the highest production cost of any previous Marvel movie. Although that exact production cost has not been revealed the world that was created for Wakanda and the high-paced actions scenes used money that was well spent.
There is so much more to enjoy about Black Panther but I want to be careful not to reveal any details that may ruin your movie going experience. I will say the movie has action, adventure, comedy and romance. Black Panther is everything a movie should be. It's rated PG-13 for violence and has a run time of 2 hours and 14 minutes. Also, as in all Marvel comics’ movies, there's a tease scene that runs after the closing credits and there's also the obligatory appearance by Marvel creator Stan Lee.
On my "Hollywood Popcorn Scale" Black Panther gets my highest rating possible, a JUMBO (with extra butter)! Believe the hype!

Gadi Elkon sits down with comedian and storyteller Robert Dubac in Fort Worth, Texas to talk about his one man show THE BOOK OF…