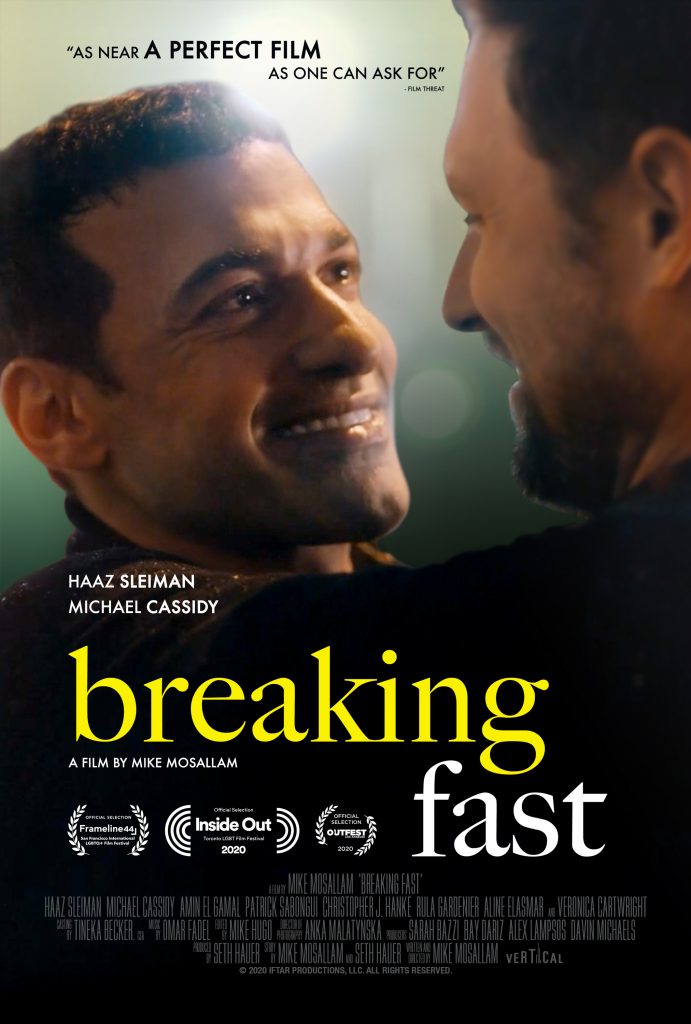 Breaking Fast is that rare independent romance film that is more about how people choose to navigate their lives regarding the Muslim religion than the fact that it’s a gay love story. There was a time not too long ago that the fact the “love story” was between two men would be the whole point of a film. Luckily for us, the novelty of that shocking plot point has finally worn off, and now more nuances can be added to the gay storytelling plate.

Breaking Fast started off as a short rom-com of the same name. It was the first film to feature a practicing Muslim character who is gay and not dealing with those two things in conflict, but rather in harmony. Because of the overwhelmingly positive responses to it at prestigious film festivals like The Cannes Film Festival, its writer/director, Mike Mosallam, got funding to make it into a feature film.

This rom-com is set in the pre-covid bright lights of West Hollywood, California. It tells the story of Mo (Haaz Sleiman), a practicing Muslim still reeling from the heartbreak of losing Hassan (Patrick Sabongui). Mo’s long-time closeted Muslim boyfriend who was part of the family. His best flaming friend Sam (Amin El Gamal) insists he attends his big birthday bash. That is where Mo is introduced to a single actor named Kal (Michael Cassidy). Kal has that all American hot boy next door look and is fluent in Arabic. He learned it when he was a kid when his dad was stationed there. The two men hit it off, and Kal gets himself invited to join Mo in his nightly Iftars. You see, it’s Ramadan when they meet, that is when Muslims fast from sunup to sundown for a month. The Iftars are the traditional meals eaten by Muslims when they break their fasts. Meal after meal, the two start to discover they have more in common than meets the eye.

Breaking Fast is a witty, personable rom-com with depth and heart. The chemistry between the leads is believable and not forced. The writing is funny and natural. Also, I like the reverence they show to the Muslim faith and how complicated it can be for someone who is gay and still a believer.

I give Breaking Fast a 4-star rating. It’s so much fun to watch but be warned, it will make you hungry. There is a great deal of yummy food being made and consumed during this movie so be sure to have some snacks at the ready.