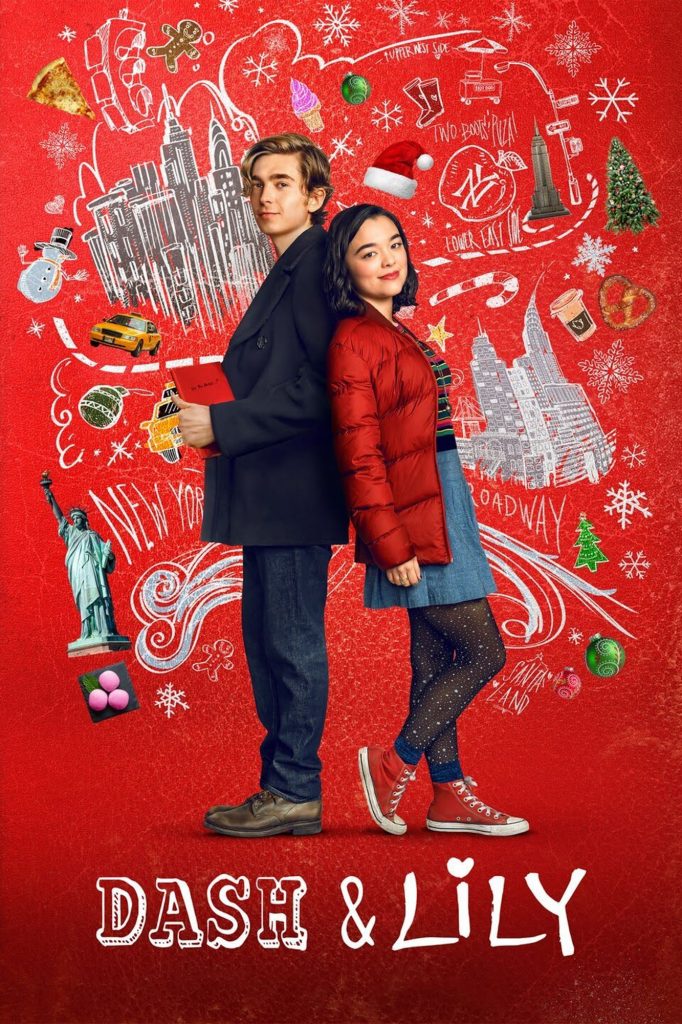 Ok, so I am convinced that Netflix has made a deal with the devil to make so many binge-worthy programs. Well, you can add the new eight-part holiday series Dash & Lily to that list of must-watch in one sitting program now.

The film is based on the book Dash & Lily’s Book of Dares by Rachel Cohn and David Levithan. It’s the first in a three-book series about two teens in love. The Netflix series creator Joe Tracz was wowed by the books himself. He’s quoted as saying: “When I read Dash & Lily’s Book of Dares, it felt like New York. It wasn’t just the specificity of the locations. It was the way the book captured the spirit of the city – the sense of possibility tinged with loneliness, and the way they both seem to magnify around the holidays. We shot Dash & Lily on location in the fall and winter of 2019, filming in so many of my favorite places, with no idea how different the city would look by the time we came out. I miss that New York, but I’m grateful to be sharing this story with the world right now.”

The television series Dash & Lily is a romantic comedy and feel-good holiday story that pulls you in from the first episode. Lily (Midori Francis) is unapologetically hopeful and a true original. She’s smart, makes her own clothes, and has never been kissed at the age of seventeen. She is a bit of an outsider at school and would rather read a book than a Twitter post. Her best friends are her grandfather Arthur (James Saito) and her older gay brother Langston (Troy Iwata). Langston and his boyfriend Benny (Diego Guevara) push Lily to break out of her safe little bubble. Since her parents and grandfather are out of town for the holidays, she realizes she has no one to hang out with. So the boys come up with the idea of putting a red notebook on the shelf of her favorite bookstore, The Strand. On the cover are the words “Do You Dare?” Inside is Lily introducing herself, without giving away her name. She asks the reader to take the challenges without using Google and find all the clues hidden in the bookstore.

The notebook is found by the cynical Dash (Austin Abrams), who is down on the holidays. This year, his big plans include hiding out at his dad’s empty apartment while his mother is out of town and reading a good book or two. Since he and the beautiful Sofia (Keana Marie) are no longer together, he’s dodging all his school friends that were really hers. The only one that knows what he’s up to is his best friend Boomer (Dante Brown), who works at Two Boots Pizza and becomes a pivotal figure in Dash and Lily’s romance.

This simple act of placing that notebook on the shelf starts off a fun Christmas romance between Dash and Lily. Forcing them to see the world from someone else’s point of view. They both grow in different ways as they use the notebook to trade dares, dreams, and desires. Anonymously passing the book back and forth at locations all across New York City. Realizing that they have more in common with each other than they would have expected. And falling in love along the way.

There is so much more I could tell you about the program. There’s a scene-stealing character Mrs. Basil E. (Jodi Long), Lily’s eccentric great-aunt. She is the theatrical grand dame of Broadway and the inspiration for her niece’s free-spirited ways. There are even a few surprise celebrities that I could mention right here, but I wouldn’t want the Netflix police to break down my door for dropping a spoiler. Besides, I want you to actually watch the series and find out for yourself how good it is.

I give Dash & Lily a 5-star rating. So all you rom-com fans, get ready for a trip to New York for the holidays this year. The show will remind you how a good love story can help set an upbeat tone for your festivities.