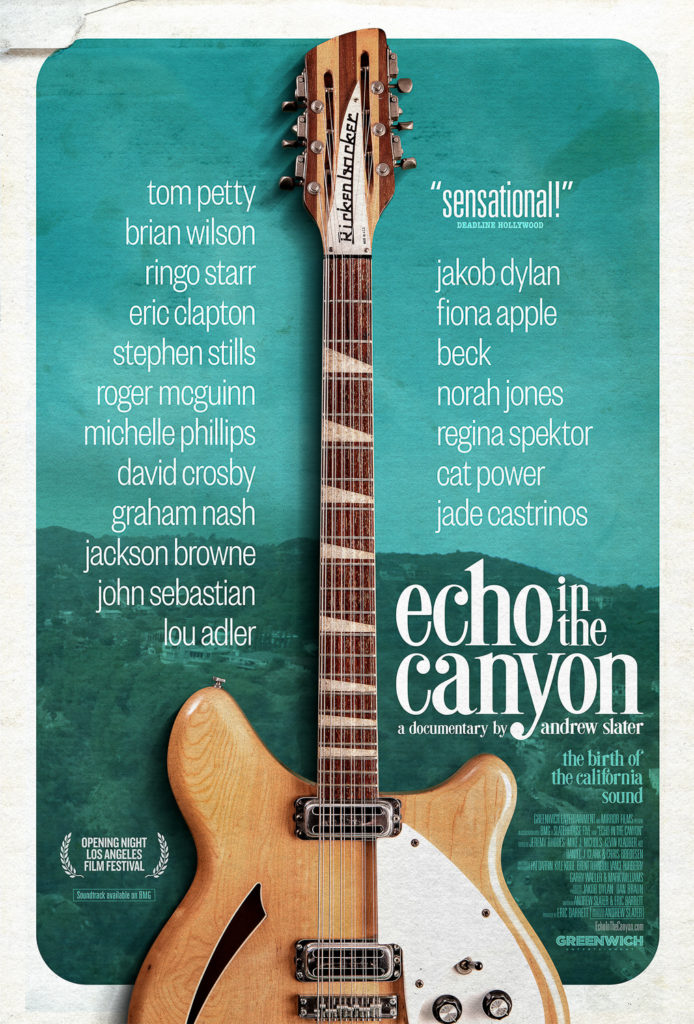 ECHO IN THE CANYON – A Review by Cynthia Flores

Calling all fans of folk-rock music that came out of LA’s Laurel Canyon in the mid-60s as folk music went electric.  This new brilliant documentary gives us a behind the scenes look at the time that the Byrds, The Beach Boys, Buffalo Springfield, and the Mamas and the Papas gave birth to the California Sound.  Featuring Jakob Dylan and his successful live concert project with the likes of Beck, Regina Spektor, and Fiona Apple that covered the music of that moment.

The whole thing was inspired by the 1967 film Model Shop.  Jakob and his producer for the film felt it really captured that magical time in California.  It was between 1965 and 1967 when bands came to LA to emulate The Beatles, and Laurel Canyon emerged as a hotbed of creativity and collaboration for a new generation of musicians.  They put their indelible stamp on the history of American popular music, that can still be felt today.  As one of the musicians in the film states, “It was the first time poetry (Folk) had been put into pop music.  Before it was all like ‘I love you, ooo ooo.’  And now, it was stuff like ’her hand waving against a starry sky.’

Echo In The Canyon explores the beginnings of the Laurel Canyon music scene. Jakob Dylan uncovers never-before-heard personal details behind the bands and their songs.  I was surprised when Michelle Phillips told the story of how she and the rest of the Mamas and the Papas were out in NYC trying to make it in that music scene when her longing to go back home to California is what inspired her husband to write California Dreaming.  Dylan shows us how that music created in Laurel Canyon continues to inspire today.  To see Tom Petty speak about his craft and how he was influenced by their music is bittersweet because this was the last filmed interview of him before his sudden passing in October of 2017.

Echo In the Canyon contains candid conversations and performances with Brian Wilson, Ringo Starr, Michelle Phillips, Eric Clapton, Stephen Stills, David Crosby, Graham Nash, Roger McGuinn.  As well as interviews with contemporary musicians that they influenced.  The live music from the tribute show did not reinvent the songs they chose.  Dylan said they stayed pretty close to the originals.  As he said, “A classic song is still a good song, and these are still relevant today.”

The use of intercutting the live performance of the music from the tribute concert Jakob Dylan and his friends put on, and intimate interviews of remaining musicians and producers are spot on and keep the film from dragging.  I won’t spoil it for you but YES it really is (BLANK) recording a guitar part for the soundtrack for this film during the credits.

Echo In The Canyon is a must-see for music lovers, and you will definitely want the soundtrack as well.  I give this film an A+ rating.