Through comics, animated films, theatrical renditions and TV versions we’ve come to know Batman’s greatest villain, The JOKER, quite well.  His origin and identity has been masked and clouded for many decades though.  Filmmaker  Todd Phillips and star Joaquin Phoenix have taken a bold stance on who they see as their Joker.  Is the performance and the movie worth your time and money?  Here is my review of JOKER.

Director Todd Phillips “Joker” centers around the iconic arch nemesis and is an original, standalone fictional story not seen before on the big screen. Phillips’ exploration of Arthur Fleck, who is indelibly portrayed by Joaquin Phoenix, is of a man struggling to find his way in Gotham’s fractured society. A clown-for-hire by day, he aspires to be a stand-up comic at night…but finds the joke always seems to be on him. Caught in a cyclical existence between apathy and cruelty, Arthur makes one bad decision that brings about a chain reaction of escalating events in this gritty character study.

I’ll start with addressing the backlash from certain critics and fans to this film.

Three-time Oscar nominee Joaquin Phoenix gets to fully dive into a certifiable figure that is pushed into the deepest state of hatred possible.  The Joker we witness in the last act of the film is an angry figure without remorse or fear of his actions.  He fully embraces the villainy of who he has seen created around his actions.  The weight loss is one element.  The laughter is a really intriguing element.  And the facial somber looks are another element.  These elements mixed in with Joaquin’s fluid dancing chops have created a rather perfect Joker figure.  His erratic behavior fits the bill and his slow demise is physically noticeable.  There are certainly shocking moments, but they are justified by his mental decay.  Could he have been saved from this terrible track in life, yes.  That I think is the point of the film.  Those left unchecked and not helped can be left to further their decay to the point to destructive behavior.  Add on top of that a mistrust of law enforcement and the constant bridging gap of the wealthy elite (The Wayne Family for instance), and the regular poor folks.  Hello America?  Europe? I mean if anything this movie is extremely reflective of our current societies.  That doesn’t mean this should entice young folks into becoming vigilantes but that is certainly a consequence of such societies.  The ramifications of showcasing this character is as hard hitting and impactful as Scorsese’s Taxi Driver, Mean Streets, and of course The King of Comedy.  It’s not a coincidence that Robert DeNiro is the central figure (Murray Franklin) that influences our poor Arthur Fleck.  In the end Phoenix delivers on so many levels and awards recognition seem a shoe in for this talented actor.

The other element of the film that makes it stand out is the music and score of the movie.  Chernobyl’s Emmy winning composer Hildur Guonadottir mixes in a haunting score with some wonderful 70s era and Jazzy numbers to give us THE JOKER sound.  The film allows for some magical moments to be engulfed by Guonadottir’s musical choices.  One of the best usages of We Will Rock you is mirrored by Joaquin dancing down a long stair case.  The power of the movie is fully realized when Hildur’s touch is present.  Her ebb and flow of the Joker and Gotham as a whole give us the perfect levels of suspense, fear and pain needed.  Mix in the 70’s gritty visuals and her choices in music certainly give the film its place in time.  If Phoenix is deserving of awards recognition so to is Hildur Guonadottir.  She is a powerhouse!

Lastly, I’d like to comment on violence in the film.  The Joker is a villain.  There is little doubt his actions go past the line that Batman would be willing to cross.  The fact that Batman isn’t a killer is yin yanged by the fact that the Joker is a killer.  And a killer who grows to not care about his actions.  Arthur Fleck’s violence escalates the more he grows into the figure that becomes the Joker.  His mental demise is fully reflected by his continued boldness as a killer. Now the film doesn’t show case an abundance of murderous violence.  Instead the physical escalation goes from Fleck being beaten upon to his trying to fight back to him finally taking life.  His terrible murders after his first initial pulled trigger are based on his reactionary quality.  He blames people for ruining his life.  The intimacy of those people allows for the intimate nature of his murders.  Arthur Fleck kills because he needs to exorcise that person from his mind.  I won’t spoil whom all he murders but notice the way in which his physical look mirrors each person.  He reflects himself in his murders.  Not so much a serial killer but rather a deranged figure slowly accepting his decaying mind as his only hope.  The violence is sudden and brutal at times.  It is also close and connected fully to the ones he kills.

JOKER is not the answer to all your comic book lore.  Rather Todd Phillips and Joaquin Phoenix have given us the perfect molding of a mental patient slowly becoming an evil villain worthy of needing a powerful hero to stop him.  Granted our hero at this point is only a sad boy who loses his parents in an alley.  So no there is no harrowing moment of hope.  This is not a Batman movie.  This is one take on how a Joker can become The Joker.  Don’t miss out on one of the year’s most controversial and impacting films. 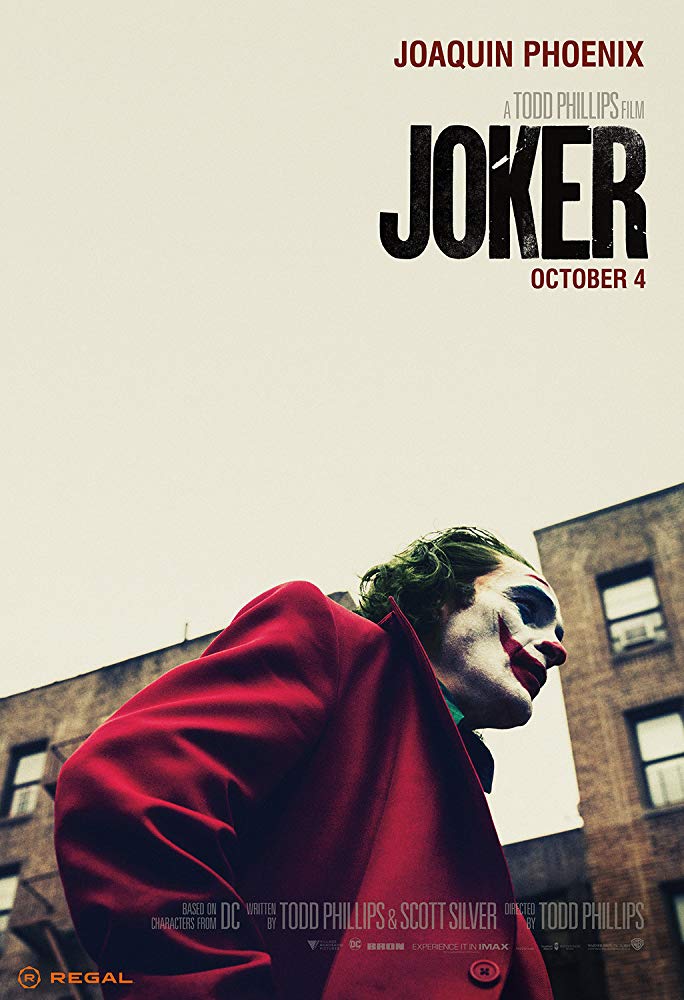