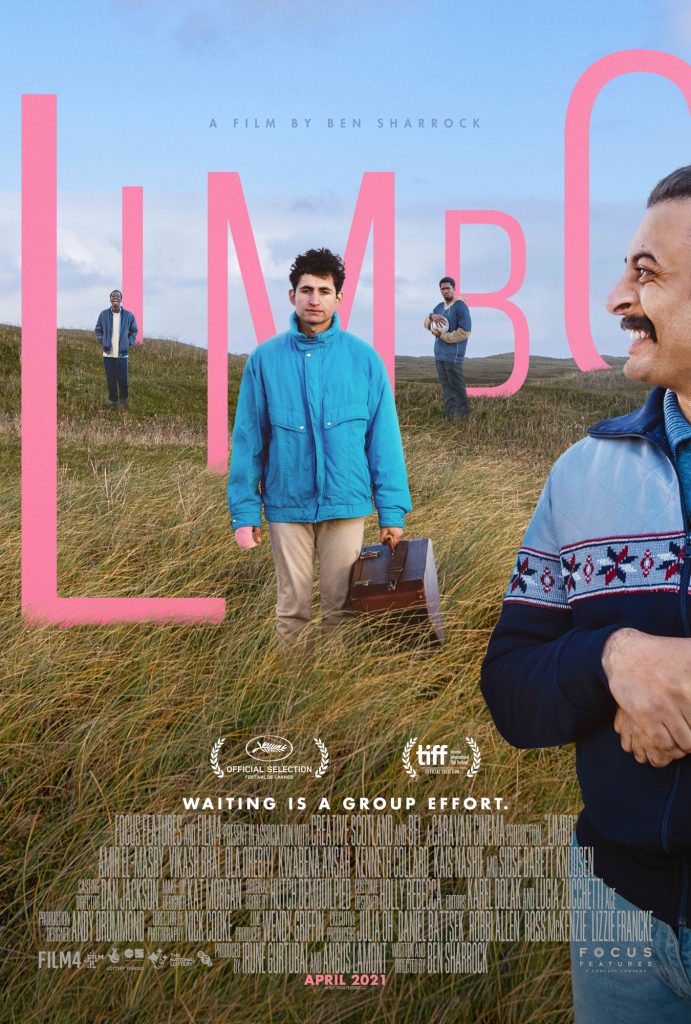 LIMBO – A Review by Cynthia Flores

Limbo is a drama wrapped in layers of tender and absurd humor. The film is the English debut film for brilliant writer/director Ben Sharrock. He’s an award-winning writer known for his unique sense of style and quirky humor. His directorial debut film was the funny Spanish language 2015 film Pikadero. With Limbo, he goes back home to Scotland and tells a poignant story about the refugee experience. It’s set in a fictional remote Scottish island where a group of new arrivals meets other refugees awaiting the results of their asylum claims. The film revolves around a young quiet and wide-eyed Syrian musician named Omar (Amir El-Masry). He is new to the group. Omar carries around the large guitar-like oud that his grandfather, a famous musician from Syria, gave and taught him to play. He has brought it all the way from his homeland. It’s in a big black bulky case, and he often struggles to lug it around. It mirrors his struggle with the whole decision to emigrate. He can’t even play it for most of the film because his hand is in a cast. Once it’s removed, he faces emotional hurdles keeping him from his music.

The refugees meet for classes at the local recreation center to help them assimilate to their new surroundings. These sessions are hilariously led by a deadpan local couple named Helga (Sidse Babett Knudsen) and Boris (Kenneth Collard). A lot of the humor for the sessions comes from their wry earnestness to help the refugees.

Omar is put in government housing with roommates from various countries. The house is almost empty except for a small TV with a DVD player that plays episodes of the TV show Friends on repeat. It’s there that Omar meets Farhad (Vikash Bhai), a sweet mustached middle eastern man that looks a bit like his hero, the late singer Freddie Mercury. Farhad dreams of getting asylum and becoming an agent, just like Tom Cruise in the film Jerry McGuire. He befriends Omar and becomes his agent.

The men are just marking time with little to do. They are not allowed legally to work and must survive on the small allowance they get and clothing donations from “The Box.” All the while, they’re surrounded by the ever-present wind billowing around them. Stuck in the desolate scenery of their temporary home.

Director Ben Sharrock has done an outstanding job giving us a touching observation of the refugee experience. He actually spent time working for an NGO in refugee camps in southern Algeria and living in Damascus in 2009, shortly before the outbreak of the Syrian civil war. There, he formed a network of friends whose personal stories inspired the film. The ensemble cast of fine actors in this film will steal your heart away with the complexity people face crossing borders to make a better life for themselves.

I give Limbo a 5-star rating. I hope it’s remembered for next year’s awards season because it will be the one to beat.