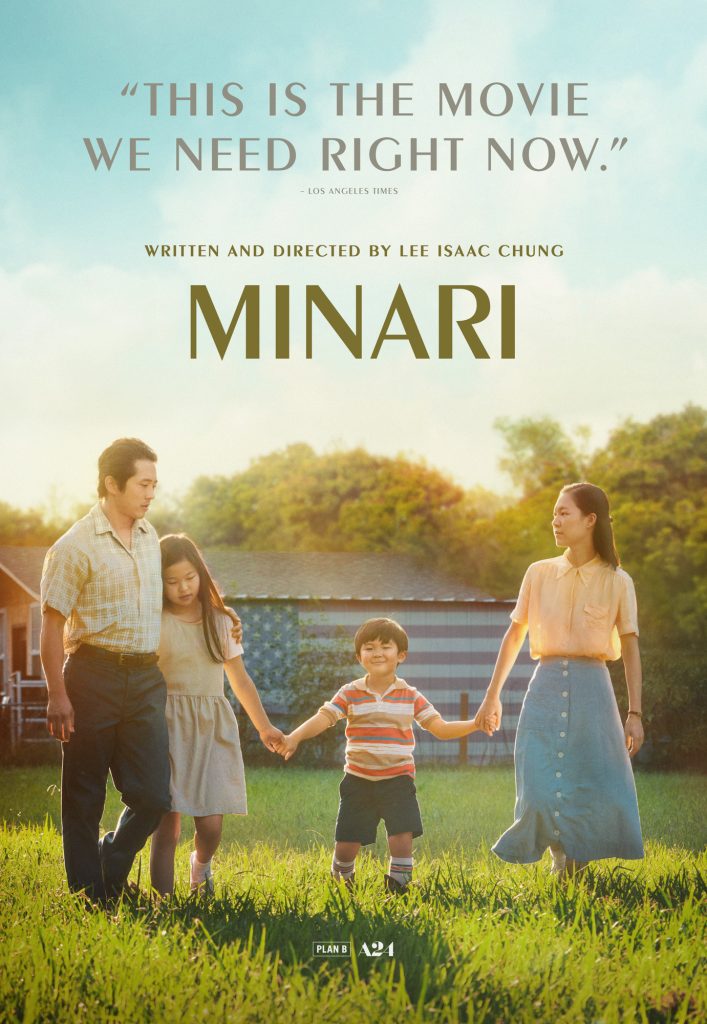 MINARI – A Review by Cynthia Flores

Minari is the Korean word for a peppery plant called Water Dropwort. It is said that it comes in the pockets of immigrants, dies in the first year, thrives in the second, and purifies the water and the soil around it. People eat it and use it as an herb. Writer/director Lee Isaac Chung named his brilliant film after this plant. It’s poetic, actually, the similarities between his tender story about immigrants chasing the American dream, what roots us in life, and the resilient minari plant.

Minari follows the Yee family just arriving in Arkansas from California in the 80s. It’s led by Jacob (Steven Yeun), who has worked and saved for ten years to buy some land and farm it. The work he did was chicken-sexing. Where you look at the underside of chicks to determine if they are girls who are kept or boys who are destroyed. It is monotonous work. He has uprooted his wife Monica (Yeri Han) and two children Anne (Noel Kate Cho) and young 7-year-old David (Alan Kim), from California to do this. David is watched over like a hawk by Monica due to his weak heart. Jacob has made a move because he believes there is a market for fresh Korean vegetables because of all the people moving from Korea to America. He has a buyer in Dallas already lined up. He’s excited to start a new life on a pint-sized piece of land in the far-flung Ozarks. The rest of the family is none too happy to leave their friends behind and move into a ratty mobile home out in the middle of nowhere.

Jacob and his wife work early shifts at a local chicken factory, sexing the chicks. Jacob is a seasoned rock star at it, but Monica is a slow learner. She was never fast enough to do it in California but is good enough for Arkansas factories. In the afternoons and evenings, Jacob works hard in his fields. At the beginning of the film, Jacob thinks he will save money by not using the local water diviner to find the place to dig his wells. A decision that will cost him considerably later, Jacob also decides to hire a helper named Paul (Will Patton). He’s an American who fought in Korea and thinks God has set up this friendship. He is a profoundly religious man considered an outsider himself by the town folk.

Monica does not like leaving the kids by themselves while they work. She convinces Jacob to send for her mother. Everything changes in the house when strong-willed and funny Grandma Soonja (Yuh-Jung Youn) arrives. She is fresh off the plane from Korea and has not seen her daughter since they left for America. In the beginning, Grandma butts heads with defiant David as she takes care of the kids. It doesn’t help that she shares his bedroom with him. Slowly, however, they start to forge the loving bonds that come from family ties. Their relationship is the strongest and sweetest to watch.

I don’t want to give further details about the storyline because I want you to watch this moving film. Just know that troubles that will make you cry befall this family as the story continues. How they deal with them together is the magic of this film.

When asked what compelled him to create Minari, Chung is cited as saying: “Minari first came into focus when it hit him just how much he yearned to tell his young daughter about where he came from, what it took for his parents to come to America, and what family—in all its messiness but also its mysterious grace notes—means to him.”

That need to communicate to his child has produced an intimate story based on his own upbringing with universal appeal.

The film is beautifully shot in the muted tones of memories by cinematographer Lachlan Milne. Its’ fabulous cast breathes life into the story of this family layered in everyday humor and pain. Simply put, Minari is a gentle Masterpiece. A moving portrait of the struggles of an immigrant family filled with love, life, and laughter.

I give Minari a 5-star rating. It’s already made the top ten films of 2020 lists and is sure to make the cut come awards season.