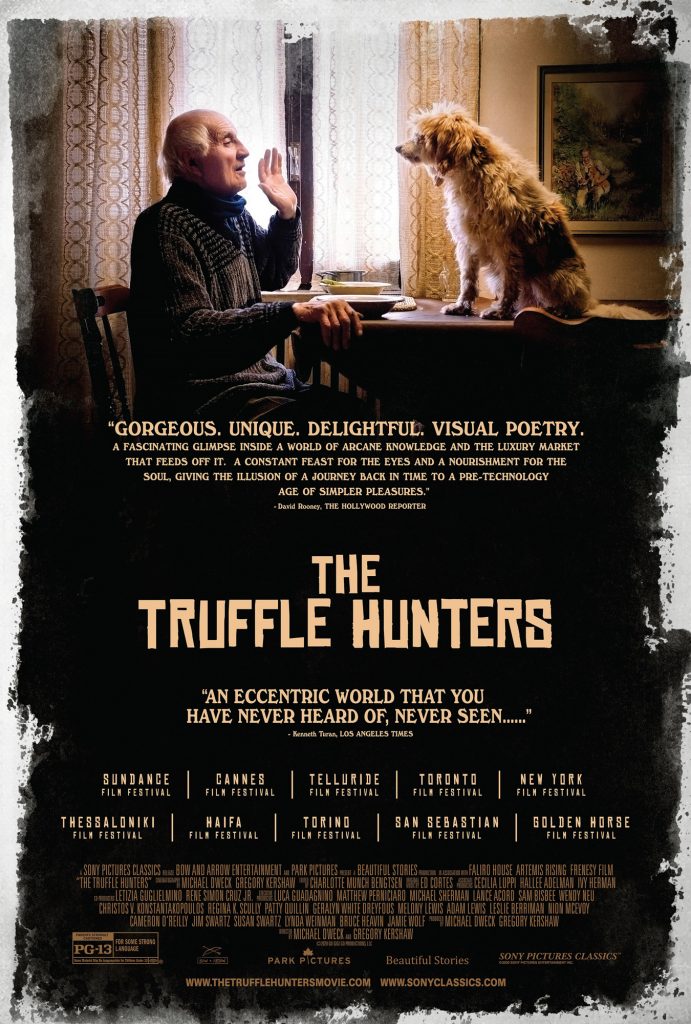 THE TRUFFLE HUNTERS – A Review by Cynthia Flores

Calling all foodies and people that miss seeing beautiful Italian countryside. The new documentary The Truffle Hunters is the perfect film to watch with a glass of red wine in your hand. Co-directors Michael Dweck and Gregory Kershaw filmed over three years to give us this well-rounded film. They actually shot the footage themselves using a lush visual style with artistically styled moments sprinkled in. There’s also a bit of humor with footage from a truffle dog’s point of view. Their choice of pacing visually and with the storyline matches the rhythm of a pleasant stroll in the woods.

The documentary is about a spice that actually costs more than gold, the Alba white truffle. There is a global demand for it. The spice can’t be cultivated and blooms only on one strip of land, in the incredibly rich soil of Piedmont’s Langhe region in Northern Italy. It grows at the roots of tall oak trees. No one knows how or why it grows where it does. Some say a white truffle can only grow at the base of a tree where lightning has struck. Others think it is dependent on the phases of the moon or magnetic fields. Some even believe it is the work of witches and warlocks. It produces an aroma unlike any other, a sweet subterranean musk that seduces and enchants when it blooms. Making it one of the rarest and most expensive ingredients in the world.

The Truffle Hunters take us deep in the forests. Where a handful of men, seventy or eighty years young, hunt for the rare white Alba truffle. The demand for white truffles increases year after year, even as the supply decreases. As a result of climate change, deforestation, and the lack of young people taking up the mantle, the truffle hunters’ secrets are more coveted than ever. We are exposed to the commerce side of the truffles through Gianfranco Curti. He has taken over the business from his father who did it for thirty years. Gianfranco is a well-dressed seller who is struggling to meet the market demand with increasingly low supplies. He sells to clients all over the world via phone, but also locally to Michelin-starred chefs in cash transactions on the street.

The film’s cast is filled with interesting people you’d like to sit and have a drink with like a retired hunter and poet, 78-year-old Angelo Gagliardi. He refuses to look for truffles any longer because of the greedy hunters that poison dogs and don’t care about property boundaries. He says, “There are two types of truffle hunters, the kind that does it for the cash only and the men that do it to spend time out with nature and their dogs.”

We get to know several hunters well, but my favorite are two particular old-timers. First is Carlo Gonella, an 88-year-old hunter with a wife that doesn’t want him to go out at night with his dog Titina because he may get hurt again. And second is 84-year-old Aurelio Conterno. He has no heirs except his gorgeous truffle hunting dog Birba, who is like family to the old man. Aurelio is on the hunt for a woman. His plan is to find a good-natured woman to take care of Birba in exchange for his home and possessions when he dies.

All the hunters are guided by a secret culture and training passed down through generations. As well as by the noses of their cherished and expertly trained dogs. They live a more straightforward, slower way of life, in harmony with their loyal animals and their picture-perfect land. They’re untethered to cell phone screens or the Internet, opting instead to make their food and drink by hand and prioritizing in-person connections and community.

When the directors were asked why they chose this subject to do a documentary, they are quoted as saying: “Today, the mystery of the white truffle remains. Our film is a portrait of a fragile place and a passionate group of people who are a reminder that this beautiful world still has much to celebrate.”

I give The Truffle Hunters a 4-star rating. It’s a window into the rich and meaningful lives of these men.