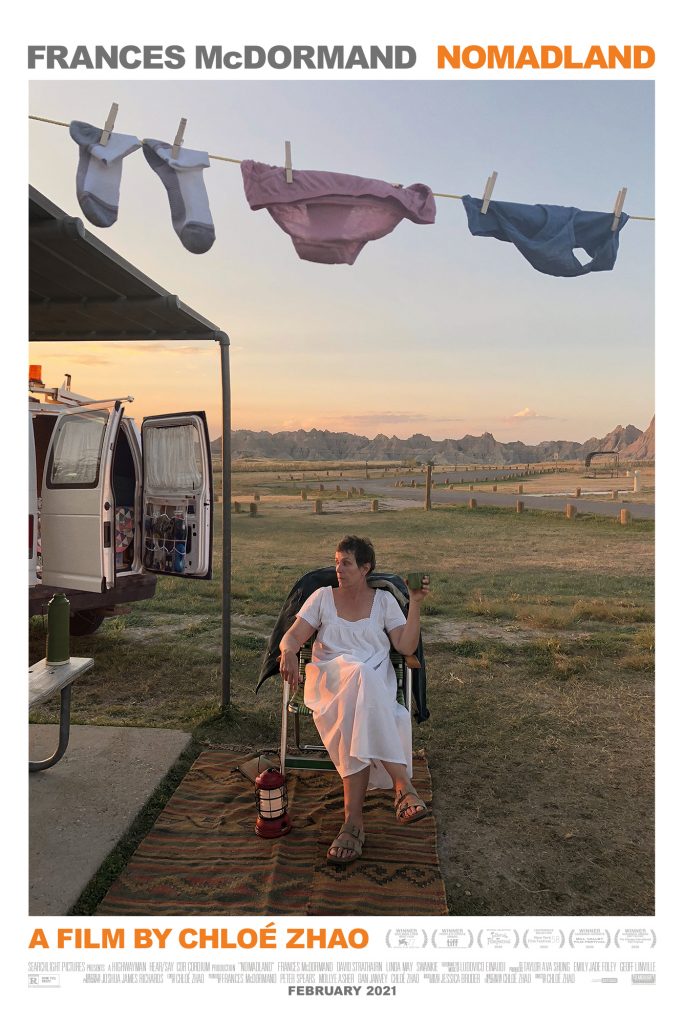 NOMADLAND – A Review by Hollywood Hernandez

Nomadland is a very melancholy story about a woman, Fern, played by Frances McDormand, who loses everything. Her husband dies and she loses her job at a factory that makes drywall when the business closes for good. The entire community in Nevada loses so many of the residents who depended on the factory for work in just six months the town’s zip code is eliminated. With no friends, no family, and no job Fern heads out on a trek across the Western US, living in her van and having limited success in finding work. While on her journey she discovers a group of modern-day nomads who band together to try and lend support for one another. The group provides her with friendship and companionship which makes her life a bit more bearable.

Director Chloé Zhao takes us on a scenic journey and weaves a beautiful tapestry of a story that has become a reality for many older Americans who don’t seem to have a place in today’s society. Companies aren’t hiring older workers, and many are alone and forced to fend for themselves to keep a roof over their heads. It’s a sad situation but amazingly Zhao manages to show the silver lining in the lives these people live. The movie also stars real-life “nomads” who do an excellent job of showing their lifestyle as people who live out on the road. One of the real-life nomads is a character named Swankie who confides in Fern that she has cancer and plans to spend her final days making memories touring the country rather than spending her final days in a hospital bed.

The real treat of the movie is the telling of the story of the lives of these ordinary people that live an unorthodox lifestyle. Another of the real-life nomads, Bob, explains the group’s credo during a roundtable talk with the members. “Good-byes are not final in this group. We just promise to see one another again somewhere down the road.” The movie is hard to watch at times but at the same time, it’s interesting and keeps your attention throughout. The movie is extremely relevant to the times we’re living in. Obviously, the movie was shot before the Covid pandemic broke out which would have affected the lives of these people even more.

McDormand plays her character beautifully and director Chloé Zhao, who’s from China, has a firm grasp on the story of the American decline that many seemingly ignore. She doesn’t pull any punches in the story-telling of a truly American film.

Nomadland isn’t glitzy or glamourous but it’s a story that holds a mirror up to the current situation that’s going on in the USA. It’s rated R for nudity and is currently showing at movie theaters and in homes exclusively on Hulu.

On my “Hollywood Popcorn Scale” I rate Nomadland a LARGE.