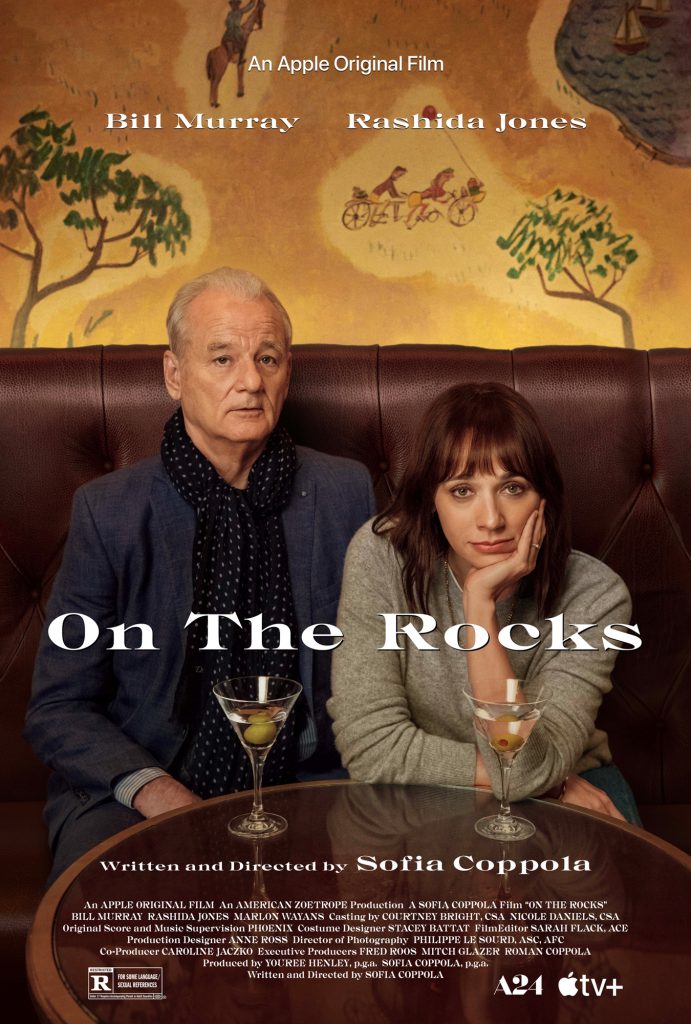 On the Rocks is a layered study of relationships. Ordinarily, I would say it was layered like an onion. Still, since Bill Murray is in it, that makes it more like a beautiful, multi-tiered cake instead. The film is beautiful to look at and a treat to share with your friends.

Sofia Coppola is the writer/director and one of the producers for this gently paced film. She must love Bill Murray as much as I do because she has also chosen to work with him again as her male lead in this film. They first worked together in the award-winning 2003 film Lost in Translation. That work got her four Oscar nominations with a win for Best Writing of An Original Screenplay. She manages to get some of Mr. Murray’s best performances, and this film is no exception.

On the Rocks tells the story of a young New York mother, Laura (Rashida Jones), faced with sudden doubts about her marriage. She teams up with her larger-than-life playboy father, Felix (Bill Murray), to tail her husband Dean (Marlon Wayans). The two begin prowling New York at night, careening from uptown parties to downtown hotspots, and commiserating over drinks at fashionable New York establishments. At each place, Felix knows the owner and flirts with any woman that crosses their paths. Laura and Felix can’t help but discover insights into their own relationship during their stakeouts. Father and daughter are drawn closer together, dealing with the looming fact that her marriage may be in real trouble.

The film has a main character that’s not in the credits, New York City itself. Sofia Coppola uses its crowded and fast-paced city rhythm against daily routes of being a family, getting the kids to school, and their after-school activities wonderfully. She shows the monotony that everyday life can have even in the big apple. Then Coppola uses the dark, sexy, and moody streets at night to mirror the questions nagging at Laura. As she feels lost trying to navigate her marriage and relationship with her father.

Rashida Jones gives a steady and nuanced performance as Laura. She’s the perfect “straight man” for Felix’s vibrant, impulsive character that Bill Murray brings to the screen. Fans of the elder actor will not be disappointed. The film stays on the lighter side of infidelity in marriage and the fallout it has on children even once they are grown. That was the filmmaker’s choice, and it only works because of the casting.

I give On the Rocks a 4-star rating. It’s a light-hearted generational clash over how we view relationships wrapped in a big sloppy kiss to New York.