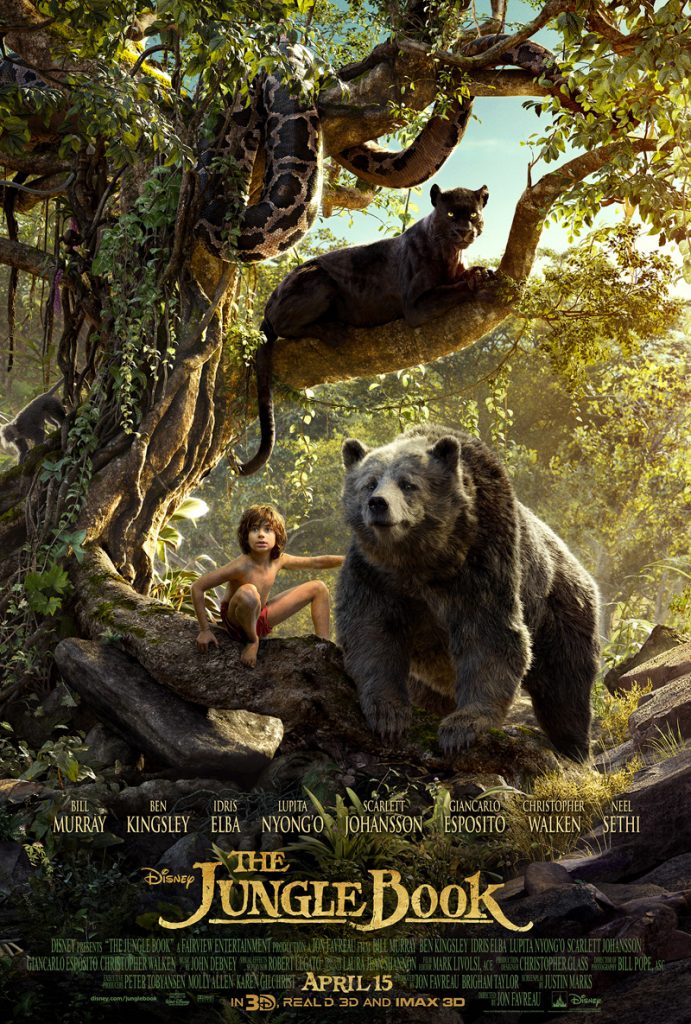 MPAA Rating PG-13 (should be R for violence)

I still remember my first cinema experience.  When I was just a little over three, my father took my older brother and me to see The Jungle Book.  I still have in the backwaters of my mind how amazed I was by the sheer joy of the Disney feature.  The songs and the characters were just captivating to my young psyche.  To this day, whenever I hear “The Bear Necessities” a smile creeps across my face.  The film started my (to this day) total love off all things put out by the Mouse House.

I was looking forward to this new version of The Jungle Book done by a favorite director Jon Favreau.  He’s the guy behind such films as Chef and the Iron Man series.  But he also helmed both Zathura: A Space Adventure and Cowboys & Aliens.  So, he has proven that he’s a director who is a bit all over the place.  His latest is the re-imaging of The Jungle Book.

The story is basically the same from the original Disney movie. It also has some changes; almost all of them do not work.  It opens with a very dark russet but lush jungle and a boy running with a pack of wolves.  He cannot beat the wolves but has a serious bond with the youngest members of the pack.

The kid is Mowgli and has become a part of the jungle community.  He was abandoned at a very early age but has learned to adapt.  All the other animals outside the pack recognize him as a ‘man cub’ but decide that if the wolves have accepted him, they should do the same.

That is all except the tiger Shere Khan (Idris Elba).  He has a major grudge against all things that are a part of man and wants the flesh of the man cub.  So, the panther Bagheera (Ben Kingsley) decides to take Mowgli back to the man village.  It will be the safest thing to do. Mowgli does not want to leave the only home he has known.

A stampede happens that feels like a part from The Lion King.  The two become separated and Mowgli eventually meets Kaa (Scarlett Johansson).  The animal is a giant snake and it ends in a very shocking demise.  This version of The Jungle Book is not for kids but it a very dark and violent tale.

Eventually, Mowgli meets Baloo the bear (voiced by Bill Murray).  He sees the potential in Mowgli as a helper for his scavenging of food.  The two almost instantly bond.  The bear and the boy start their own pack.

The single best moment is the “Bare Necessities” song which doesn’t fit the tone of the first half of the work or the rest of the film.  Both musical numbers in The Jungle Book stick out from the rest of the work but in a good way.  The musical islets were the only bits of the animated flick that survived and only one has the delight of the cartoon version.

Mowgli is captured by some apes and he is taken to their king, Louie (Christopher Walken).  The beast is truly frightening, much along the lines of Peter Jackson’s King Kong.  The song “I Wanna Be Like You” is presented but with a very sinister tone.  It loses the fun of the original.  Besides, Christopher Walken couldn’t sing his way out of a paper bag.

There is only one real person in The Jungle Book who is Neel Sethi as Mowgli.  As a kid actor goes he does a fair job of carrying a feature.  It was very hard to act to a bunch of green screens.  The best feature of Neel is those expressive brown eyes.  The young actor uses them again and again to sell the scenes.

The single biggest problem with the film is that it violates the point behind the original screenplay.  The idea was that the boy discovers for himself that the safest place is in the man village and not in the jungle.  This version blows it all off in a PC Greenpeace kind of revelation.

It is a violation that seems to be a set-up for the sequel without any literary resolution.  God forbid anyone make a film that is not a part of a continuing story just to milk the audience out of another almost $20 per head.  It seems that modern day Hollywood thinks “Why make the admission price once when we can do it many times over and make hundreds off the idiot public?”  We are being willingly taken advantage of and never even complain about it.

Another problem with The Jungle Book is that is really doesn’t take place in the jungle.  Most of the film is in shades of ugly brown and not lush green.  Since every element of the film except for Mowgli is done on the computer is doesn’t make sense not to make the film better looking.  Why didn’t someone point out that there should be some vegetation within the confines of the background?

The only single element that worked was Bill Murray as the voice of Baloo.  He captures the magic of the original while adding a solid layer of comedy as the icing on the cake.  The best moments of the film happened when his character was on screen.

I’ve been making my list of the worst of 2016 and this version of The Jungle Book will land in the mix.  I don’t think that it will still be there by year’s end but stranger things have happened.  Be warned and do not take young kids to this film.  It will scare them to death and give them nightmares well into Halloween.