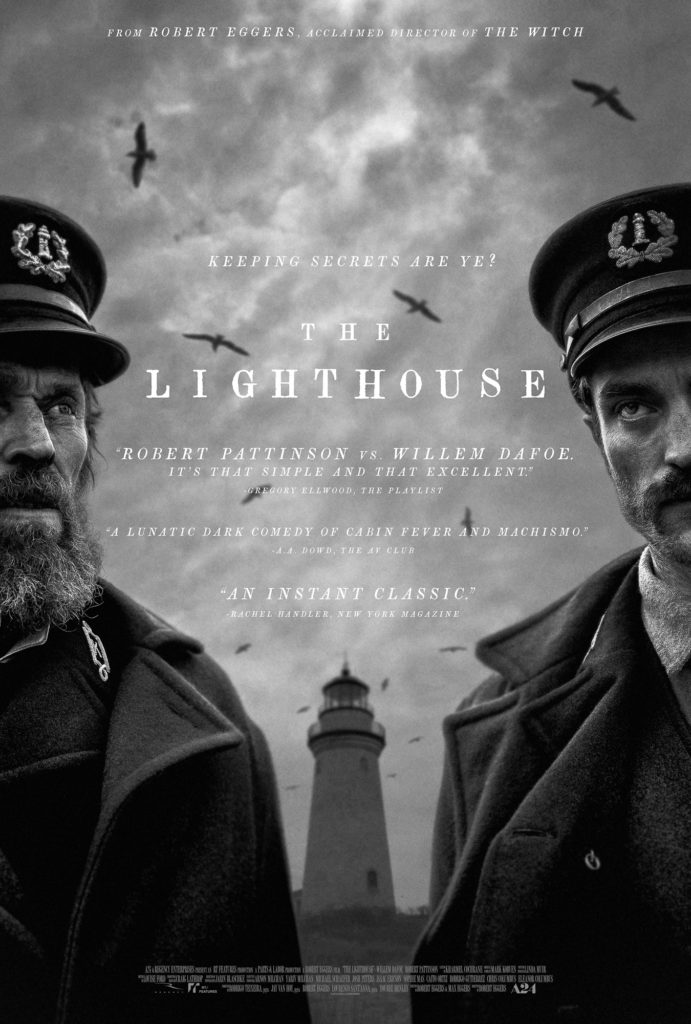 THE LIGHTHOUSE – A Review by Cynthia Flores

The Lighthouse is the second film from visionary writer-director Robert Eggers.  He used the same talented team that helped create his debut 2015 horror hit The Witch.  Together, they have made his new film a terrifying journey into the unknown.

Again, the director has chosen New England as the location to tell his story.  This time it’s at a lighthouse in the 1890s on a remote island off the coast.  Two lighthouse keepers are the only people on this barren spot of land.  Captain Thomas Wake (Willem Defoe) is the haggard, hardscrabble senior man in charge.  He keeps the logs as he orders around the younger Ephraim Winslow (Robert Pattinson) who’s new to this kind of job and has to do most of the grunt work.  He has signed on for a tour of four weeks for his first time out as a “Wickie”.  The days are long and tedious for young Ephraim who longs to find out exactly what old Thomas does during his night shift locked away at the top of the lighthouse with the great big light.  Both men get their fair share of masturbatory time on screen as the myths of mermaids and the loneliness of the situation frustrate them both.

Towards the end of Ephraim’s tour, Thomas insists that he drink a toast with him to his last night on the rock.  Ephraim has refused liquor during his stay because it’s against the rules, but reluctantly gives in to what seems more like an order than a request.  This leads to a drunken night of old sea songs being sung and revelry between the two.  Both men wake late the next morning to find that a storm has rolled in keeping the supply ship and Ephraim’s ride to shore away from them.  The seemingly never-ending storm leaves the men trapped and isolated.  They engage in a drunken escalating battle of wills.  As tensions boil over and mysterious forces, real or imagined, loom all around them as they spiral into a madness that is both beautiful and brutal.

The Lighthouse is an art-house film with a capital A.  It’s in black and white, has a 4:3 aspect ratio, only has three actors with speaking roles, and it has crazy hypnotic and hallucinatory scenes that leave you wondering if you really saw what you think you just saw.  And the way it was shot on 35mm film stock makes the light all around the men and from the lighthouse itself stunning and purposeful.  The director is quoted as saying, “There’s a great power in the light, and there’s a reason why Pattinson and Dafoe’s characters are both attracted to it.  I’ve chosen to remain mysterious about the nature of the light in this movie.  It should be enigmatic and sublime, awesome and fearsome.”  Like I said… an arthouse film through and through.  That being said, it’s also a must-see film this season.

The Lighthouse evokes a wide range of influences.  The director used seafaring literary classics by Herman Melville, Robert Louis Stevenson, and the works of Sarah Orne Jewett.  She was a Maine-based poet and novelist best known for her works set on the Eastern seaboard during the turn of the century published in 1890.  As research for her work, Jewett interviewed old sailors and farmers, often writing in their dialect.  It greatly influenced the dialects of the two main characters in this film.  In fact, there’s a scene where Thomas, who has gotten his feelings hurt, lets out the most poetic and passionate seafaring curse on Ephraim in the Rhotic maritime dialect that existed in the Northeast during that period.  As he bellowed his curse it made you want to hold your breath in wonder to its ferocity and then want to applaud at the end of it.  I can imagine Willem Dafoe reading the script and talking the part just to get the chance to utter those fabulous words.

I give The Lighthouse an A+ rating and hope it gets as big an audience as it deserves.