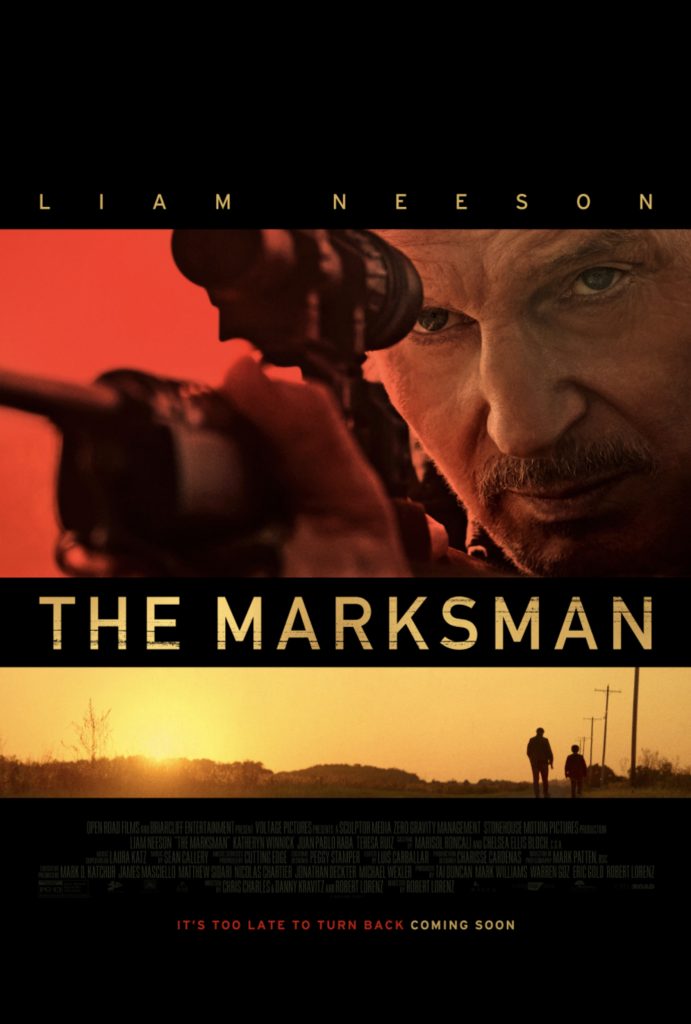 THE MARKSMAN – A Review by John Strange

Rancher Jim Hanson (Liam Neeson) has seen his life turn pretty bleak.  He’s losing his home, his ranch along the Mexican border in Arizona.  He routinely sees coyotes of both types.  One of the four-legged variety gives us the chance to see Jim’s prowess with his rifle.

Whenever he sees the two-legged variety leading illegals into this country, he calls in on a radio given to him by his stepdaughter Sarah (Katheryn Winnick), a U.S. Border Patrol Agent.

And then he encounters Rosa (Teresa Ruiz) and her 11-year-old son Miguel (Jacob Perez), emerging from a break in the fence as they run from cartel hitmen led by Mauricio (Juan Pablo Raba).  When the hitmen arrive at the break, words lead to shooting and one of the cartel men dies, but Rosa is also severely wounded in the exchange.

Before she dies, the mother begs Jim to get her son to his relatives up north.  Jim takes the boy to the Border Patrol station but changes his mind when he sees Miguel will be turned over to the men from the cartel.

The trip to get Miguel to his relatives is fraught with peril (I always wanted a good excuse to use that phrase) as the cartel hitmen pursue the pair northward across America.

The story is well-written, and Liam is the perfect person to portray this down-on-his-luck former Marine.  To my mind, the only other actor capable of pulling off this role would have been Clint Eastwood.

This is a story that fits well with the events unfolding today and will be just as good years from now.