The Number 44 is one of 143 numbers, out of a 1,000, that is a happy number.  To the tribe, or for you gentiles read – The Jews, the #44 is a special because there are 44 candels lit in the 8 nights of Hanukkah.  The great Jerry West wore number 44 as did the Iceman (George Gervin – GO SPURS!), and a fella named Hammering Hank' (Aaron).  Dirty Harry had a freaking .44 Magnum.  Mark Twain thought quite highly of the number.  For all you Syracuse Orange folks (wuzup Pete and Lauren!) the #44 should look familiar as Jim Brown, Ernie Davis and Floyd Little retired the number from all future footballers (RB heaven).  But the 44 tidbit that goes best with this upcoming 44th USAFF is the fact that Nolan Ryan pitched his 7th no-hitter when he was…

The 44th USA FIlm Festival sure packs a hell of a Nolan Ryan style heater, it blows past your nose and forces you the hell out of the strike zone.  Or look at the festival as the ageless wonder that could, the Ryan Express aka The Festival that can, will and has done everything.  This year's festival is no difference, jam packed with quality wins…films!  Woody Allen and John Turturro bring the quirky, Fading Gigolo to Dallas.  It's a movie about making a little scratch by doing naughty things.  Stephen Tobolowsky is back as an honorary Mr. Everything as he acts as festival Host.  But instead of fire off a bunch more awesome names, check out the full schedule… 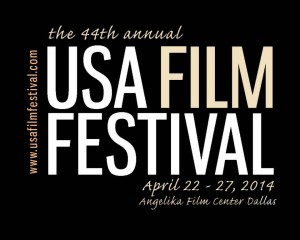 To go back to the whole #44 how about a few top 4 lists to go along with USA FF.

My Top 4 films I'm looking forward to seeing at the Festival:

3. THE CREATURE FROM THE BLACK LAGOON – 60th Anniversary of the Film – Saturday April 26 – 7pm – Julie Adams in attendance!

The film is directed by Lance Daly who made Kisses, one of my all-time favorite festival found films.  A few years back, I had the wonderful chance to interview Lance's long-time producing partner, Macdara Kelleher: 1 & 2.

And to complete the 44, here are my top 4 moments from previous USA Film Festivals.

2. Barry Corbin, Peter McCain, Casey Greig, and Director Kathy Lindboe – No Names – USA Film Festival 2011.  Barry gave an introduction before the film where he thanked his manager Hillard Elkins, who had passed away a few weeks prior.  I've never experienced a more amazingly emotional moment like this ONE.

See you at the 44th USA Film Festival.

Written By
Gadi Elkon
More from Gadi Elkon
Many folks have thought that Ant-Man might be the first Marvel Entertainment...
Read More