Set within a ramshackle kibbutz community on the northern border separating Israel from Lebanon, the film follows a trio of brothers who reunite to bury their father’s body before the youngest heads off to battle.

Here is our chat with THE DIVE‘s Writer/Director/Actor Yona Rozenkier.

Here is our Interview with Writer/Director/Actor Yona Rozenkier:

1. Can you share with us how you heard your film would be a part of the 7th Israel Film Center Festival?

My friends told me that! I was also alerted by my sales agent and we are thrilled to be screening there! I’m just sorry I won’t be able to come.

2. As the youngest of a three brother family who lived briefly on a Kibbutz I must admit I was blown away by your film. My father’s military duties were on the borders, granted we all left before our age of military service. Please expand on where this plot came from and any personal connections you have to this film? Were the punches between you bros real?

The film is very personal indeed. When I thought about what film to make as my first feature I knew I would have to choose a personnal subject. Something that is planted deep in my heart. I knew it would be dealing with the PTSD from war – a condition which I endured when I just started to write. I knew it would be about the relationship between broithers since I am very close to my three brothers and I knew I wanted to let them act in it. Two of them have the main roles and our eldest, has a small role as well. The punches weren’t real even though our very close relationship allowed us to be more physical with each other – more than “normal” actors can.

3. I love the film nods in the film. How much fun was to:

A. Blame all the family troubles on Clint Eastwood (or was he specifically calling out Josey Wales?)

In that scene I wanted to talk about the role cinema has on portraying men and masculinity. I think that sometimes, cinema can create a masculinity which is almost impossible to be and I believe it impacts people who try to imitate something impossible. This is why the Blade Runner poster is there too. The brothers are surrounded by heroes of film that are unattainable. Those heroes also have a role in creating the toxic masculinity the film talks about.

B. Have a Blade Runner Poster? I love the set design choices. A Roberto Baggio Poster!!

Roberto Baggio was my biggest idol growing up. i knew i would place that poster somewhere!

4. For the jump to feature you kept your DP and Editor. Can you talk about the visual style your were looking to capture and of course the pacing elements of the film? Did any of the ideas for this film come from experiences gained from your previous shorts?

I knew I would work with them because I wanted to share the opportunity with them as well as obviously thinking they were extremely talented. I wanted to grow with them: Oded Askenzi, the DOP and Or Lee-tal, the editor. I believe that working with your friends and not with people with a lot of experience allows you to take more risks in your artistic decisions. I also think that because they knew it is there shot too, they brought all their hearts into the film. I couldn’t be more happy with the way we worked together.

5. What was the casting process like for those folks not actually related to you?

All the extras are from my kibbutz and I personally know them. The whole Kibbutz helped with an unbelievable energy and will. It was incredible. I couldn’t be more proud than to come from that Kibbutz which I truly love. The role of Private was written for Daniel Sabag who is an actor and my best friend since the age of 13. The others were cast through a casting agent.

6. What was it like shooting the water/cave scenes? Camera used?

It was extremely dangerous to tell you the truth… bordering on crazy. Yoel dove without equipment and with weights 8 meters deep and 20 meters long. We had two friends from the kibbutz who are diving instructors who were also there but there obviously wasn’t a real “belt” of security. Just us and the camera. We were really afraid to dive there – just like the characters of the film. The water was very cold: 19 degrees and it took us 10 hours to shoot while we almost didn’t exit the water to warm up. Micha almost had hypothermia. It really was scary. The camera was a mark 2 and the operator, an ex-Israeli navy seal said it was the hardest day of shooting he had and said that no actors would have done what Yoel did nor what Micha. I was proud!

7. Can you talk about the importance of this being a film shot on a Kibbutz?

It is my Kibbutz and I knew we could bring a production value relatively easy but mostly it was because of the story. I wanted to talk about a macho society and I think the Kibbutz is one. I love being a Kibbutznik but there are traits that bother me because I love it.

8. The film was at TIFF and enjoyed a nice festival run and now being in NYC what do you hope viewers gain? How impactful has the festival circuit been for you as a filmmaker, any specific moments that stand out?

I hope people will enjoy the ride and hope it will make them think afterwards. We had many amazing moments, but I think the biggest one was at the Jerusalem Film Festival when at the awards ceremony we were put in the back of the hall, but then we were the big winners of the festival with 4 awards: Best Film, Best Debut film, Best Male Actors for the THREE of us, and Best Cinematography. Another amazing moment was our premiere in Locarno where we won two other awards, our TIFF screening and also the screening in the Chinese theater in Hollywood as part of the AFI.

9. I really enjoyed The Dive and can’t wait to see what’s next? Speaking of…???

I have a dramatic comedy of a road trip of a drunken father and his depressed alienated son on a tractor from their northern Kibbutz to Eilat. We are in financing so if any of your readers can help us out with it, we would be more than happy!!!

For more information about the festival please go to the 7th Annual Israel Film Center Festival. 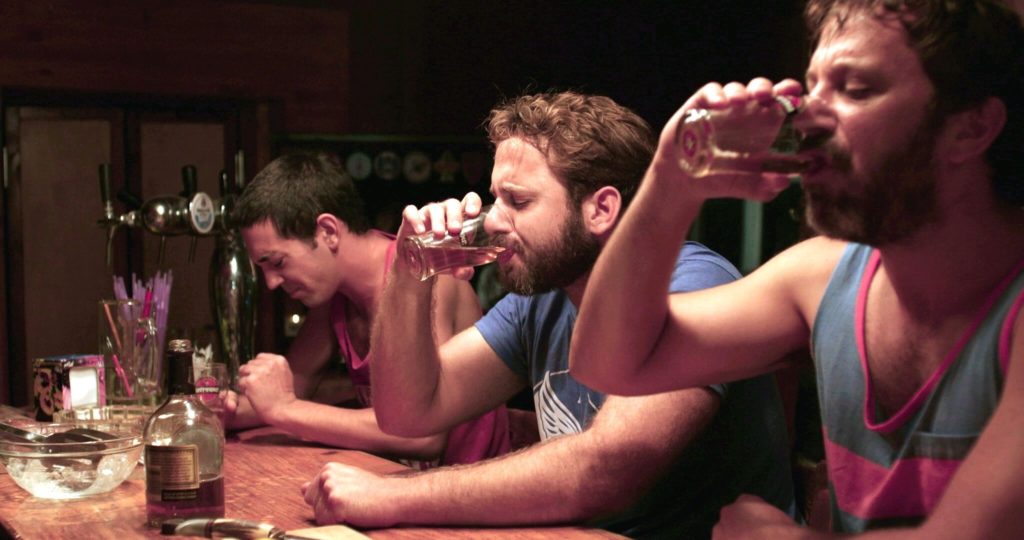