Acclaimed filmmaker Sofia Coppola brings a light touch to this blend of an exuberant love letter to New York, a generation-clash comedy about how we see relationships differently from our parents, and a funny celebration of the complications that bind modern families even as they tie us in crazy knots.

Here is Gadi Elkon’s full review of Sofia Coppola’s ON THE ROCKS.

Laura (Rashida Jones) thinks she’s happily hitched, but when her husband Dean (Marlon Wayans) starts logging late hours at the office with a new co-worker, Laura begins to fear the worst. She turns to the one man she suspects may have insight: her charming, impulsive father Felix (Bill Murray), who insists they investigate the situation. As the two begin prowling New York at night, careening from uptown parties to downtown hotspots, they discover at the heart of their journey lies their own relationship.

On The Rocks Review by Gadi Elkon:

Sofia Coppola re-teams with her elder male muse Bill Murray and a slew of other familiars.  Back again for the Coppola run is her DP Philippe Le Sourd.  The cinematographer has been her visual maestro for her last three major projects.  Coppola’s ability to have connected with her DPs has made NYC, Tokyo, Cali, Civil War era Virginia, and even Louis XVI era Paris into the vibrant and dazzling backgrounds of her stories.  In her latest film her lead actress may seem new to the CV for Coppola, but ironically Rashida Jones was the original reader for Charlotte in Lost in Translation.  And finally add in the career long working relationship with Editor Sarah Flack and you have another Coppola team effort.  This cohesive team delivers one of Sofia’s more entertaining and humorous films.  Not to say that the film doesn’t deal with serious material but the innocent take on the circumstances is a refreshing new element to Coppola’s writing.  Oh and add in her hubby’s getting his band back into the fold with a new song in three years and we truly have a fresh new work that is worthy your viewing.

So what makes On The Rocks an enjoyable ride?  Well ironically it’s not some deep connective lineage to Lost In Translation (not sure why critics keep linking those just because of Bill), but the film that popped into my mind, while viewing this one, was Scent of a Woman.  A womanizing alpha male father figure takes their younger more thoughtful caring “child” on a journey of exposure and wonderment.  As Pacino’s wily figure traversed New York in search of thrills Murray takes his daughter on a slew of entertainment he fully loves.  Both films highlight the swanky elegance of New York’s night life and the sophistication of the town.  They also both include FAST RED CAR scenes that end with the elderly lotharios somehow talking their way out of obvious tickets.  Now the overall circumstances of a possible failed education vs possible failed marriage are drastically different the intent of the films are quite similar.  The young “child” figure must make the ultimate choice in the end and find a way to break free of the fatherly figure’s hold.  As I loved Scent of a Woman so to I felt real admiration for Coppola’s romp through NYC.

Lastly, I recommend this film based on Coppola’s lovely choice to have dueling whistling be a legitimate father-daughter activity.  Throughout the film we see Rashida’s character run the gamut of emotions and not have her father’s tremendous carefree whistling ability.  Not till the end does she come to terms with her hubby’s reality but she finds out she can still whistle.  The notion being that even married couples stuck in ruts can grow while they maybe apart from each other.  I found it a really powerful and yet humorous treat to see father and daughter simply trying to whistle a tune here and there.  Coppola’s ability to find a connective element that is so simple in nature is her real gift.  As we see her characters mature and grow with each film so to does Coppola become more emboldened and resolute with her choices.  This film proves she can tell a simple story but have tremendous fun tricking it up and yet remain care free.

“Just whistle while you work.  And together we can tidy up the place.”

Yes indeed Mrs. Coppola once again delivers a neat and tidy film that should shine brightly above all others.  I recommend this film! 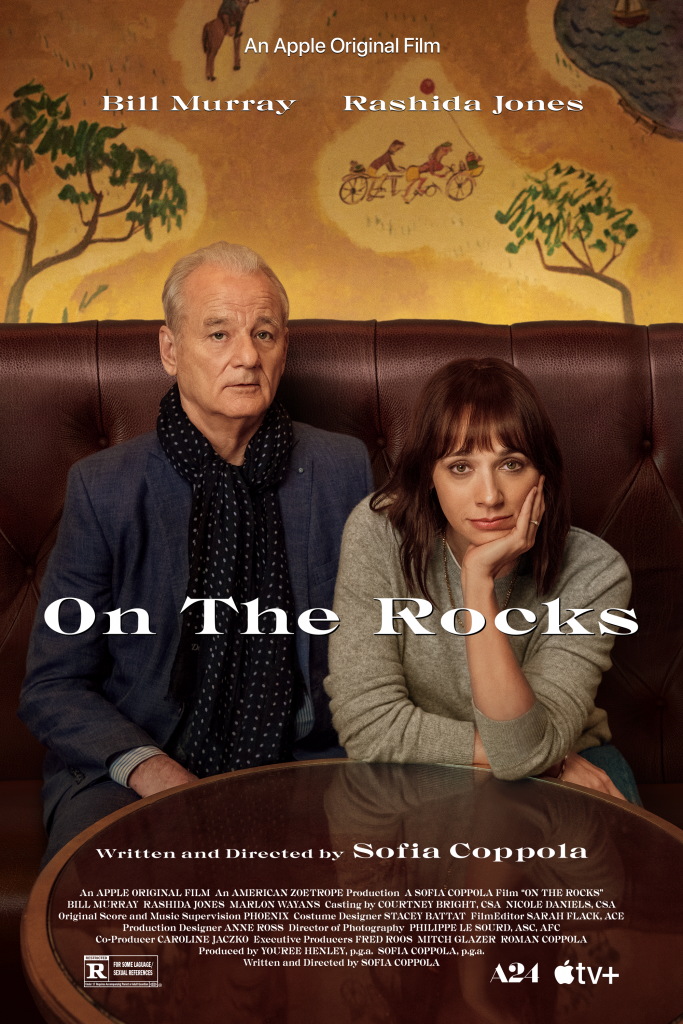