The fellas behind Sausage Party bring a fun adult twist to the classic dark comedy of Charles Addams.  Does it work?  Here is my full review of THE ADDAMS FAMILY.

Directors Greg Tiernan and Conrad Vernon begin our retelling of the Addams family legacy by showing a fleeing Gomez and Morticia.  Where do the spooky ooky couple of our memories escape their persecution?  How about Charles Addams childhood calling grounds, New Jersey!  The directors, writers and animators do a wonderful job of giving older fans (adults) a nostalgic look back at the original movies, TV shows, and cartoons by having the classic looks.  But a few twists of the modern are added in.  Pugsley’s famous black and white strips are given a little color and so to his hair.  His famous Octopus pet is now Wednesday’s, under another famous figure’s name this time.  We get a lovely background to Lurch and treated to a new wrinkle with his talented musicianship.  Overall the duo tackles the famous deadly family with a real gusto by sprinkingly loving nods throughout.

The voice acting choices are done really well.  Oscar Isaac gives Gomez a nice punch with his over the top portrayal as head of the home.  The real head of the house is of course Morticia and her fluid movement is delicately done by Charlize Theron.  She doesn’t have to raise her voice to be heard and so she always seems totally in control.  The best moments are her gasps, especially when battling with her daughter Wednesday.  The real hero of our story is the young mistress of the house, who is perfectly done by Chloe Grace Moretz.  Wednesday, like most of the stories, is the real behind the scenes main character.  Her want and need to explore outside opens up the assimilation world below the Addams Family manor.  Her fearless nature allows for the hidden secrets to be unearthed about the overbearing Margaux Needler (A wonderful performance by Allison Janney).  Finn Wolfhard’s innocent Pugsley Addams holds the majority of the main plot as it’s his coming of age tale brings back the entire extended family to the new abode in Jersey.  Finn’s back and forth with Chloe is done so entertainingly and the dynamic sibling rivalry is main stage.  Adding in the final punch to the great casting is highlighted by Nick Kroll’s goofy Uncle Fester, Snoop Dogg’s inspired cuz’n It, and the iconic Bette Midler’s Grandma.  These famous “extras” hold their own.

The only elements that don’t hit top notch are the origin retooling takes us nearly a third of the way into the movie.  The setup just takes away to much fun time getting to see the family interactions.  They mainly are reacting to the outside influences.  It’d be great to see the writers and this directing duo have a chance to tell a kooky plot now that we’ve set the stage of the updated background.  The animation may also be a little weird and catch the audiences off guard.   Tiernan and Vernon have given their own touch to the family and introduced their versions to a new generation of Addams family fans.

The film is out now in theaters and awaiting your butts in the seats! 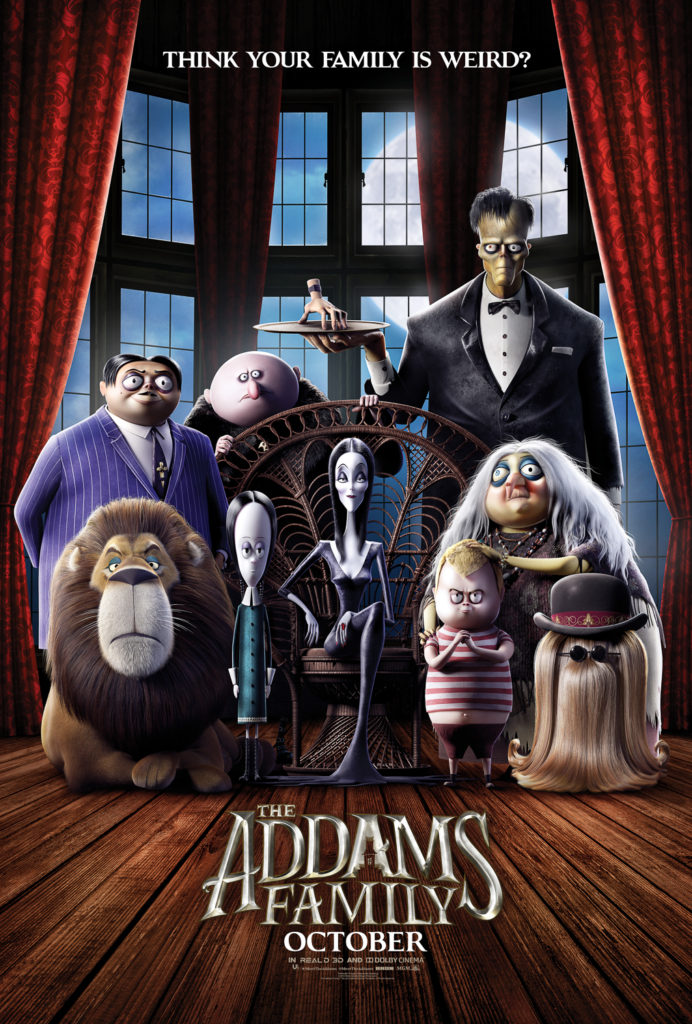