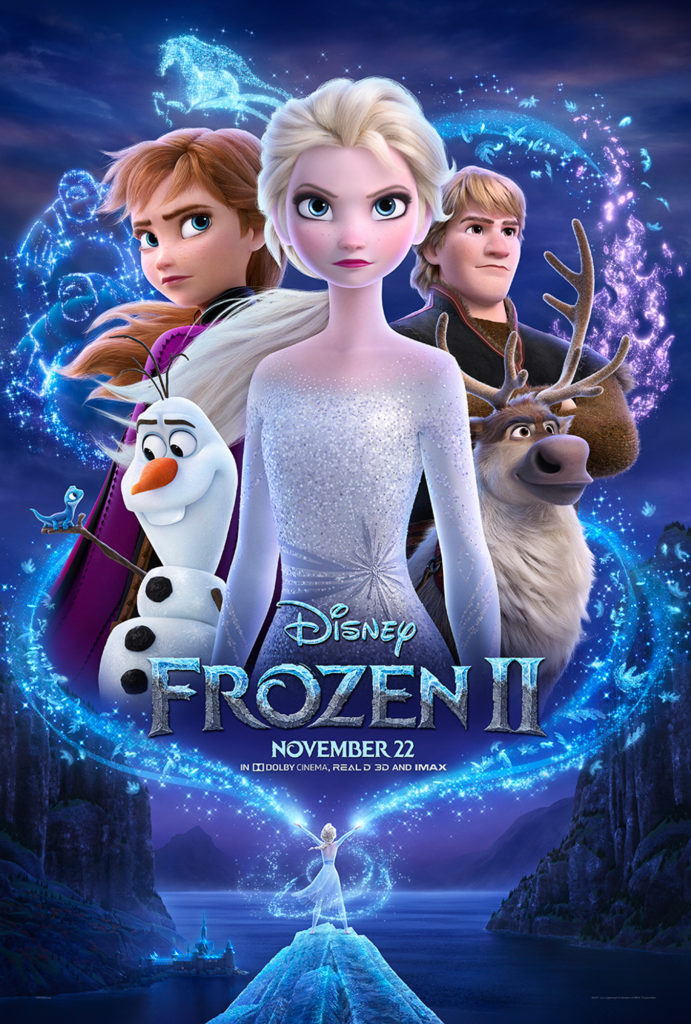 Ok, so unless you live under a rock or have no children, you don’t know about the animated feature that came out six years ago called Frozen.  It was a charming fairytale that had great music and was the first to provide a villain that changed from a frosty antagonist to a misunderstood outcast.  Well, Disney, of course, has come out with a sequel called Frozen II.

The story begins with Anna (Kristen Bell) and Elsa’s (Idina Menzel) father King Agnarr (Alfred Molina) telling them the story of what happened in the forest when he was young.  And then their mother Queen Iduna (Evan Rachel Wood) sings to her daughters about a mystic river at the end of the world whose waters contain all the secrets of the past.  Arendelle’s past soon becomes very much at issue after the town is threatened with destruction by the restless spirits of the earth’s four elements.  It emerges that the kingdom has unfinished business with the Northuldra, the native people who inhabit the mountains above the palace.  Elsa hears a haunting voice calling her to the enchanted forest.  There’s a lot at stake for Arendelle, its very existence.  So Elsa, along with Anna, Kristoff, and Olaf follow the voice to find the answers to save their kingdom.  If you want to know how it turns out, you will have to go see the film.

For Frozen II, Disney brought back the same writers/directors Jennifer Lee and Chris Buck along with the Oscar-winning composing team of Robert Lopez and Kristen Anderson-Lopez.  They even got the entire voice cast to return.  Kristen Bell (Anna), Idina Menzel (Elsa), Jonathan Groff (Kristoff), and Josh Gad (Olaf).  So with the whole team back, you expect magic in a bottle again along the lines of the first film.  Maybe that’s where the problem lies.

This really could have been a chance for Disney to take the storyline in a different direction.  Instead, in Frozen II, they used the same formula that they laid out for the plot of the first film.  For example, there’s an opening childhood flashback to start both films.  Next, is an establishing scene in present-day Arendelle.  Cue Anna and Elsa fleeing their kingdom in the name of protecting it.  Then, Olaf, the snowman, cracks jokes the entire time.  Next big scene Elsa belts out a ballad in an icy enclosure during which her wardrobe gets a magical upgrade.  In the first film, all this seemed fresh and had surprising emotional depth.  However, in the new movie, it just kind of skims along the surface of the ice putting its heroes in physical peril to make the kids in the audience cry.  Don’t get me wrong; it’s a beautiful looking surface, especially seen in the IMAX cinema.  The detail in the costumes down to the stitching is impressive.  And Elsa riding on a horse made of seawater was a genius move.  Not since the 1945 film, National Velvet, starring a twelve-year-old Elizabeth Taylor has the mythical connection between girls and horses been shown so magically on the screen.

Because the creative team behind Frozen II had the mandate to give millions of Frozen fans what they expected, this new film is far less surprising.  The underpinnings of Frozen about the cost of emotional repression were much more substantial than the Frozen 2 theme of doing the right next thing.  They did, however, manage to make it more of an action film and to give us a few more songs for kids to go around singing over and over again.  Also, I loved Olaf the snowman in every one of his scenes.  He steals the show with all his jokes and silliness.

Despite any of my criticisms, Frozen II is a fun film to see on the big screen.  I think the added action and Olaf’s running commentary are worth the price of admission.  I give it a B+ rating.  Heads up, stay to the very end of the credits, and you’ll get an extra bit of fun to watch.

In a time when I have now decided to turn off all the notifications on my phone, this short film perfectly encapsulates my…