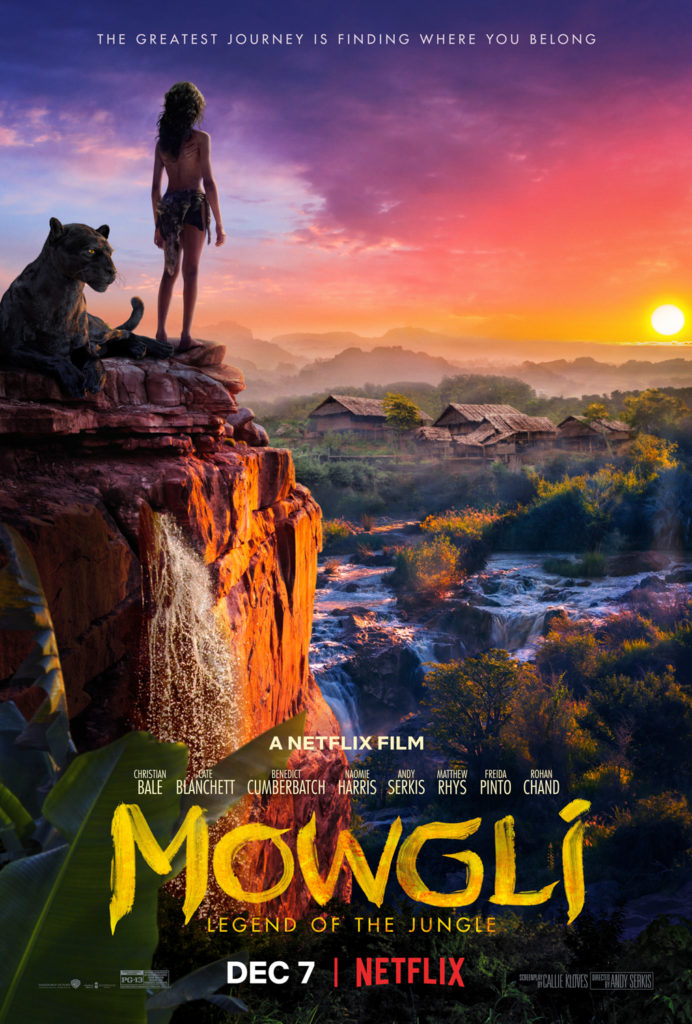 MOWGLI: LEGEND OF THE JUNGLE – A Review by Cynthia Flores
This is the year that content providers like Netflix want to win an Oscar.  They have a chance with this new film Mowgli: Legend of the Jungle.  They're trying for best writing, best picture, and director.  Andy Serkis certainly does a fabulous job directing this film.  This telling of Rudyard Kipling’s classic story of a man-cub raised in the jungle by wolves benefits significantly from the technology that we have available to us today.  Saying that seeing talking animals in a live-action film is still always a stretch, but in this film, you get sucked into this world rather quickly.

This is the story of Mowgli (Rohan Chand), a baby whose parents are murdered by Bagheera (voice of Christian Bale), an evil tiger.  He surely would have killed the child as well if not found first by Shere Khan (voice of Benedict Cumberbatch), a strong black panther who takes the young man-cub to the Wolfpack in the hopes that they will raise him.  We watch as he grows and is trained to become part of the pack and join in the hunt.  As hard as he tries, Mowgli does not succeed and is sent to the village to live with the humans.  He does not want to do this but Kaa (voice of Cate Blanchett), the great python that is said to see the past and future, after saving him from the tribe of monkeys tells Mowgli that he will have a choice to make and may bring peace to the jungle.

In the village, he meets the great white hunter, Lockwood (Matthew Rhys), who befriends Mowgli and teaches him how to use a knife to hunt with.  He has been brought to the village to hunt and kill the tiger that has been slaughtering their cattle.  It’s through his relationship with Lockwood that Mowgli learns what he must do to bring peace to the jungle and rid it of both the evil in man and animal that has brought death and destruction to his world.

This new film Mowgli: Legend of the Jungle stays true to the book of stories about Mowgli that Rudyard Kipling wrote and not the Disney animated 1967 classic we all grew up with called The Jungle Book.  This movie is exotic and at times quite frightening.  I really wouldn't take any children under the age of seven to see this film unless you want to give your kids nightmares.  There are scenes with the monkey people that will stay in your imagination for days to come.

I think Netflix is backing a winner if they want to get into the Oscar race.  Mowgli: Legend of the Jungle would be best seen on a widescreen in a theater, however, if you see it at home then turn out all the lights, turn the volume up on your surround sound, and settle in for a great ride of a film.  I give this movie a solid A rating.
Directed by Andy Serkis
Written by Callie Kloves from the book by Rudyard Kipling
Rated PG-13
Selig Rating A
Running Time 1hr 44min
Drama / Fantasy
Limited Release December 7th IPic Theaters Fairview then Netflix
Starring: Rohan Chand, Christian Bale, Cate Blanchett, Benedict Cumberbatch, Andy Serkis
The Selig Rating Scale:
A – Excellent movie, well worth the price.
B – Good movie
C – OK movie
D – No need to rush. Save it for a rainy day.
F – Good that I saw it on the big screen but wish I hadn't paid for it.
Tags from the story
Andy Serkis, Benedict Cumberbatch, Cate Blanchett, Christian Bale, MOWGLI: LEGEND OF THE JUNGLE, Netflix, Rohan Chand, Warner Bros
Facebook Twitter Pinterest
LinkedIn Email