“THE PHANTOM OF THE OPERA makes a triumphant return to Dallas as part of its North American Tour.  The production, overseen by Matthew Bourne and Cameron Mackintosh, boasts many exciting special effects including the show’s legendary chandelier. The beloved story and thrilling score – with songs like “Music of the Night,” “All I Ask Of You,” and “Masquerade” – will be performed by a cast and orchestra of 52, making this PHANTOM one of the largest productions now on tour.”

Here is my full review of The Phantom of The Opera at DSM.

The new Phantom on tour is the statuesque Quentin Oliver Lee.  Quentin took time before transforming into the Phantom to chat with Dallas press about the iconic role.

For a bit more with the wonderful Phantom please go, here.

Quentin Oliver Lee’s performance is extremely powerful.  Not only does his booming voice allow for some real magic in the lair sequences but his ability to make every word hit really makes him completely connected to the audience.  Eva Tavares continues to define the role of Christine.  The tiny powerhouse has become a real favorite in the lexicon of Phantom lovers and she matches her giant Phantom step for step in this production.  The rest of the cast is just as solid.  Jordan Craig as ‘Raoul,’ Trista Moldovan as ‘Carlotta Giudicelli,’ David Benoit as ‘Monsieur Firmin,’ Rob Lindley as ‘Monsieur André,’ Susan Moniz as ‘Madame Giry,’ Phumzile Sojola as ‘Ubaldo Piangi’ and SarahGrace Mariani as ‘Meg Giry.’

The real treat of any Phantom show is the memorable tunes and the updated technical aspects.  The technical triumphs are the 2,000 lb chandelier and the revolving and changing stage.  The chandelier plays it’s part with a great umph but the changing stage really is the visual treat.  The modern Phantom holds so many more fun treats over the older version because of these technical additions.

The Phantom of the Opera has a nice run till January 6th at DSM’s Music Hall at Fair Park.  All I’ll ask of you is that you once again venture to witness the Phantom haunt his way into your hearts. 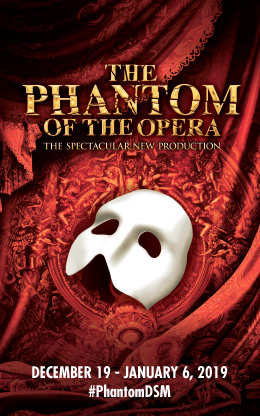 Written By
Gadi Elkon
More from Gadi Elkon
Mr. Holmes is a smart, intriguing and touching look at an aged...
Read More