A successful “house tuner” in New York City, who calibrates the sound in people’s homes in order to adjust their moods, meets a client with a problem he can’t solve.

Here is my review of The Sound of Silence.

There are a symphony of almost undetectable sounds that make up a moment of silence, and Peter Lucian (Peter Sarsgaard) is determined to catalogue them all. Through his job as a New York City “house tuner,” the hyper-methodical Peter works meticulously to diagnose the discordant ambient noises—produced by everything from wind patterns to humming electrical appliances—adversely affecting his clients’ moods. When he takes on the particularly difficult case of Ellen (Rashida Jones), a lonely woman plagued by chronic exhaustion, Peter finds that the mysteries of the soul may be even greater than the mysteries of sound. A quietly moving portrait of a harmony-obsessed man learning to embrace the dissonances of human emotion, The Sound of Silence invites viewers to hear the world with fresh ears.

In reading through Michael Tyburski’s Director Statement I found that his closing sums up nicely the merit of this film to audiences.

Regardless of whether you subscribe to the theories behind house tuning , I think it’s vital to examine just how much the sounds around us can affect our daily lives.

A stellar cast lead by Peter Sarsgaard as our eccentric house tuner and Rashida Jones as our intriguing love interest carry the film nicely along.  The pacing is of a slower variety and allows the sounds, ambience and plot to unfold in a peaceful manner.  Granted Sarsgaard’s unique choices really make his performance rather fascinating.  I can’t say this pace will be enjoyed by every audience, but the short time length helps in assuaging the slowness.  What stands out in the movie is that sonic presence or sometimes the lack there of.  The way in which we get to interact with NYC through it’s sounds is rather fun and illuminating.  It’s not as exhilarating as lets say last year’s sonic suspense thriller A QUIET PLACE, but instead this slow building love tale is dynamic because its peculiarity.  You will find yourself seeping into the pores of the film simply because of the audio qualities in the movie.

It’s rather obvious that the music is just as important in this type of film.  Will Bates classical score is perfectly fitted to Tyburski and Nabors pacing.  The ebb and flow of the love story is mirrored wonderfully while the unique sounds of the Big Apple are expanded by Bates bold choices.  Overall the musical quality of the film is done extremely well.

The element I will say that I didn’t necessarily like is the darkness levels we venture into.  At times it’s really hard to make out what the hell is going on.  But that does push along the importance of listening to the action.  This audible element can be jarring and yet slightly soothing.  For it to reach complete fulfilment we may have needed slightly more action or at least a more drastic conflict.  In the end, the film does what you expect it puts our leads together in a sweet conclusion that seems out of place.  I don’t mean to spoil, but you don’t go see this film for the love story.  Rather you brave the isolation of the theater to hear and witness the power sound can play.  The filmmakers have true ambition and intelligence behind this work, but a taste of the dramatic and you would have a real winner.  I look forward to seeing where Nabors and Tyburski go from here.

THE SOUND OF SILENCE 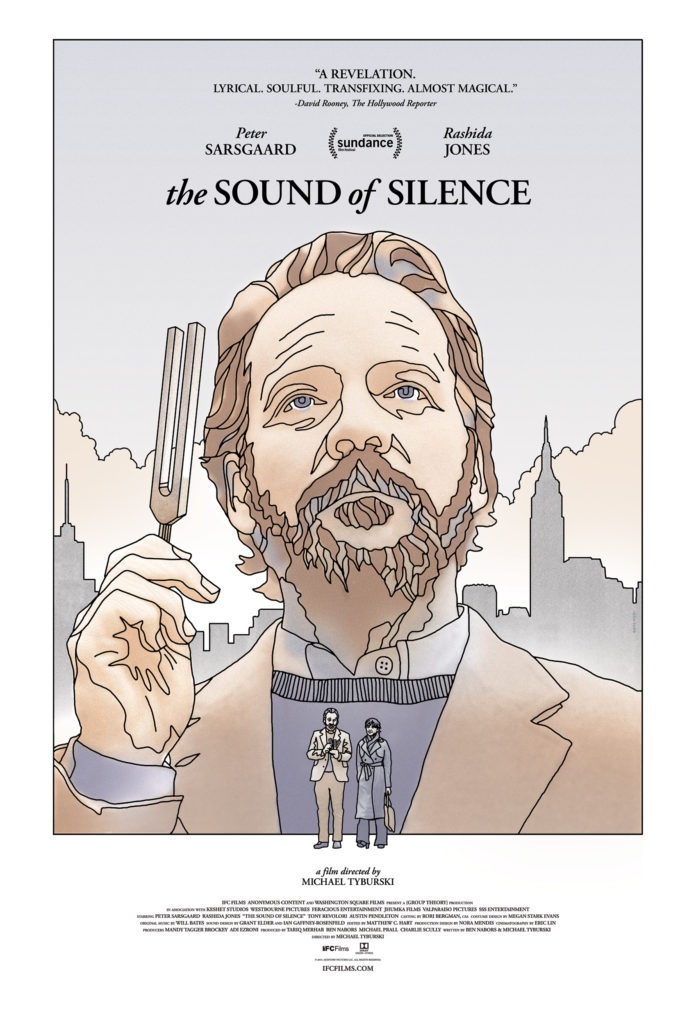 Written By
Gadi Elkon
More from Gadi Elkon
Today, Nowitzki: The Perfect Shot is out in theaters, on demand and...
Read More